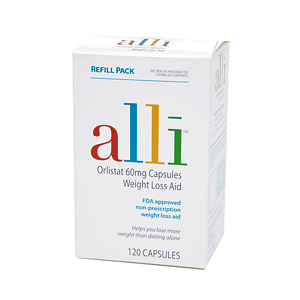 Does Alli (Orlistat) work? In one word: yes. However, weight loss in addition to the results of calorie restriction and exercise alone are not (yet) proven to be dramatic. Additionally, most research conducted on the drug has been performed on Alli’s prescription-strength cousin, Xenical [1].

Donald Hensrud, a preventative medicine and nutrition specialist at Mayo Clinic, explains the mechanism by which Alli produces additive weight-loss effects to the traditional “diet and exercise” regimen . By blocking lipase reactions in the digestion process, Alli prevents some fat from being broken down which results in lower calorie “absorption” [1]. While Alli is designed to work in this manner, it is not a miracle drug; the instructions state that when taking Alli, consuming more than 15 grams of fat per meal can lead to unwanted side-effects such as diarrhea, urgent bowel movements, and flatulence with oily spotting [1]. According to my recent poll, the side effects alone were enough to keep the majority of my blog readers from using Alli to aid in weight-loss effects. Obviously oily anal leakage and discharge can put a damper on…a lot. G-ross.’

Dr. James Anderson at the UK College of Medicine Metabolic Research Group piloted the first study of its kind on the effects of Orlistat (Alli, 60 mg) on mildly to moderately overweight adults desiring weight loss. Over the course of 16 weeks, participants were given 60 mg of Orlistat three times/day, or a placebo. The affects were faborable for the FDA-approved weight-loss drug — those receiving Alli did lose more weight than their placebo-taking counterparts. Those taking Orlistat lost almost 5% of their initial body weight, averaging between 7 and 15 pounds. Dr. Anderson notes the vital role of exercise and a low-fat diet used in conjunction with Alli for desired and sustained effects [2].

15 grams? Well, that’s probably a lot, right? Um, wrong. To prevent those unpleasant side effects, one would likely want to comsume 15 grams of fat or less at each meal…so, let’s get some facts on fat.

Knowing that, does 15 grams per meal sound doable? If so, you’re my hero. A typical 2,000 calorie a day diet comprised of 30% fat (a typical average) would include 66.7 grams of fat daily. Knowing very well that fat

is essential in the diet…raises red flags for me. Yet, the mechanism of action works because fat is the most calorically dense component of food — 9 calories per gram versus the 4 calories per gram in carbohydrates and proteins.

In short, knowing what you’re getting into. Alli is not meant to work miracles, but to be an assistive device. As always, I recommend the old-fashioned “eat less, move more”.

Author’s note: There’s plenty one should know about any pill they’re popping, particularly so for weight loss and nutritive effects. Because supplements, including vitamins, are not FDA inspected, they are not tested for purity, potency, or safety. To ensure the quality and safety of your over-the-counter supplements, please refer to the US Pharmacopoeia website for guidance.