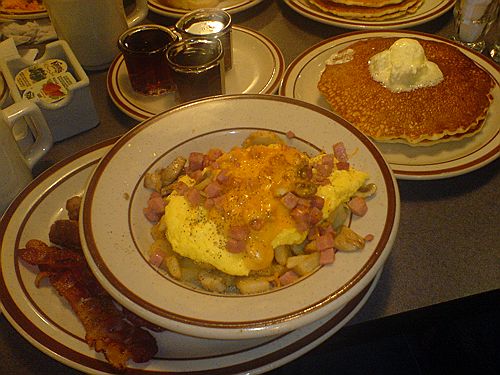 If you enjoy a good’ole Denny’s breakfast anything like my family — brace yourself. In keeping with yesterday’s topic of sodium…turns out, Panera may not be a leading offender.
A consumer activist group in New Jersey sued Denny’s Corporation this week because of the “dangerously high” levels of sodium found in their meals. As previously discussed, the recommended daily allowance for sodium is 1,500 milligrams for a hypertensive individual, and up to 2,300 milligrams for a healthy individual (some sources stick with 1,500 mg for all). Some menu items at Denny’s more than double Panera’s worst offender with nearly 6,000 milligrams of sodium. *blink*
As for the health implications of such foods, we know that diets high in sodium are major causes for hypertension, which is associated with heart disease and stroke — two of the leading causes of death. The Executive Director of the Center for Science in the Public Interest, Michael Jacobson, is quoted in saying, “For those Americans who should be most careful about limiting their sodium, such as people middle-aged and older, African-Americans, or people with existing high blood pressure, it’s dangerous to eat at Denny’s. Denny’s customers deserve to be warned about the considerable health risks posed by many of these meals” [1].
As for Denny’s…they have no comments at this time (duh).
It’ll break my brother’s heart to hear that the Denny’s Meat Lover’s Scramble which contains two eggs with chopped bacon, diced ham, crumbled sausage, cheese plus two bacon strips, two sausage links, hash browns, and two pancakes weighs in at an astonishing 5,690 milligrams of sodium — a scary 379% of the recommended daily allowance [1].
But the bleeding doesn’t end there. A Denny’s Spicy Buffalo Chicken Melt with seasoned fries will provide 4,880 milligrams of sodium while an added bowl of Denny’s Clam Chowder would together boast a staggering 6,700 milligrams of sodium for the meal – an amount that should be consumed over the course of 4 1/2 DAYS. Medically speaking, the body has a difficult time ridding of that amount of sodium and excess sodium in the body can lead to fluid retention and accumulation in the lungs, presenting potentially severe medical consequences over time [2].
And, it doesn’t stop there. EVEN the smaller meals advertised specifically for children and seniors contain sodium in excess of the daily recommended intake [2]. Scary, isn’t it? Dr. Stephen Havas of Northwestern University explains high sodium intake to be one of the nation’s top health threats. He goes on to share that by reducing 50% of the sodium content in packaged and restaurant foods, there would be 150,000 saved lives each year. If that’s not evidence enough for change, I don’t know what is.
Beware of Denny’s! Though my hypertensive father doesn’t read blogs, this one will be printed and snail mailed to Chicago. 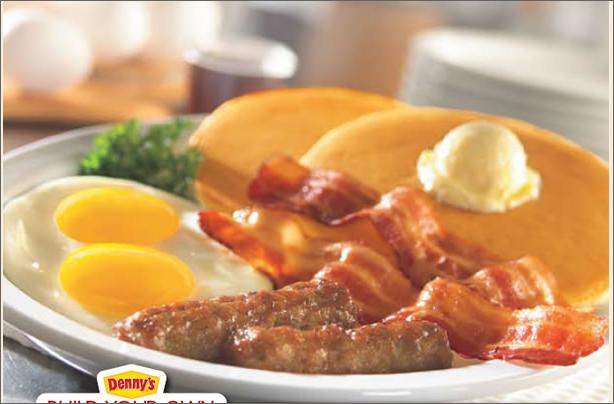 While I know my parents look forward to retirement and “Lumberjack Slams” (850 calories and 3180 milligrams of sodium), the Food Police, as I’m so lovingly referred to, says “NO!” to Denny’s. Back to the kitchen, Maaaaaaaaaaaaa… also known as Jan’s Bar and Grill.
[1]. Activist Group Sues Denny’s Over Sodium Levels. Reuters UK. July 23, 2009.
[2]. Unsafe Sodium Levels at Denny’s Prompt Class Action Lawsuit. CSPI Newsroom. July 2009.