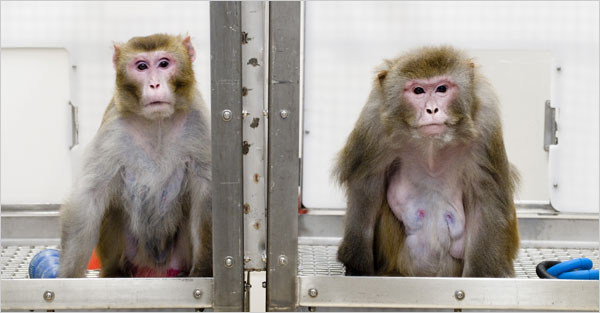 While results are deemed premature, dieting monkeys may offer hope for living longer. In similarly conducted studies involving mice, favorable results were produced. When consuming 30% less calories than their uncontrolled counterparts, mice have been seen to have significant increases in longevity — up to 40% longer, in fact [1]. Impressive.
Would the same be true in humans? Primates? One study researched into the latter. Using rhesus monkeys, 30% reduced-calorie diets were observed starting over 20 years ago. With an average life span of 27 years and a maximum life span noted at 40 years, the study has surely required patience from the team leaders, Ricki J. Colman and Richard Weindruch of the University of Wisconsin [1].
Despite the known life span of the primates, the results were reported this past Thursday in Science. The researchers describe the study results as “showing many beneficial signs of of caloric resistance, including significantly less diabetes, cancer, and heart and brain disease”. Colman and Weindruch conclude the study’s data proves caloric restriction slows the aging process in the primate species [1]. Is such the same true in humans?
Most know that humans are most similar in genetic make-up to that of the primate, so the study results appear quite promising as far as human longevity is concerned. Based on similar mice studies, an additional 10-20% in longevity was hypothesized. Critics declare the death rate in the experimental reduced-calorie primates was not significant compared to the death rate of the control group. Though there is a difference in the number of deaths, the statistic is not significant [1]. As can be guessed, the researchers explain the experimental monkeys deaths to be attributable to undergoing anesthesia during blood sampling, and others from gastric bloat related to endometriosis. With those deaths accounted for, the results would be deemed statistically significant [1].
All-in-all, the study raises interest of reduced-calorie diets and their benefits, as there are no obeserved harms. As always, eat less and move more for better health.