This is more for fun than anything…plus it’s probably Trivial Pursuit-worthy. 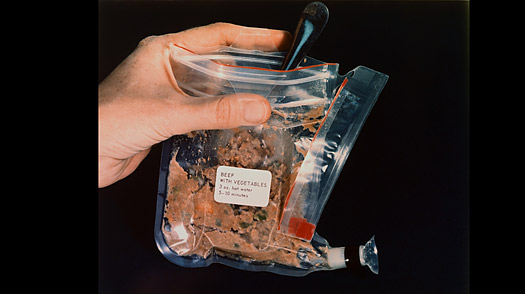 Flying to the moon requires more compact, efficient, high-tech nutrition than that required on flights to say…Mercury (duh, right?). Designed using “scientific nutrition”, astronauts are certainly not bragging about “pills and paste”, the space-ready food served on their menus in the past. Such products were designed to provide calories, vitamins, and minerals… however, astronauts won’t eat the stuff. The “pills and paste” are packaged in squeeze tubes or as bite-size cubes coated in gelatin to keep crumbs from escaping. Warren Belasco, author of “Meals to Come: A History of the Future of Food” describes the food as “edible biomass, food for function, not for the soul [1].” No kiddin’. 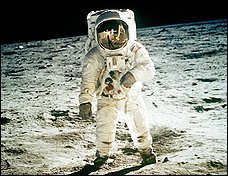 Astronauts were losing a lot of weight not only in part to the extremely unappetizing food, but also in part due to their increased energy needs. While “floating” sounds easy enough, a lot of energy is expended in space as opposed to gravity-ridden Earth. The calcium needs of the astronauts are also increased as bones regenerate more slowly in space.
However, Apollo astronauts were the first to have hot water aboard their space craft which allowed for dehydrated foods which were packaged like the military’s meals ready to eat (MRE’s) [1]. Unfortunately, the foods were typically consumed out of a pouch, allowing them to eat with a spoon versus the retired “pills and paste” alternatives in the past [2].
Flying in space causes a shift in body fluid to the head causing a decreased sense of smell. Because 85-90% of what we taste is what we smell, astronauts commonly use hot sauces, soy sauce, and other bold flavors to season their food and increase the flavor. Overall, the advances in selection and quality for our space crews have drastically improved. Those working for NASA have 180 varieties of freeze-dried foods from which to choose. They can even opt to include some of their favorite foods in the form of freeze-dried. A menu cycle is typically 7-days and many shuttle crews allow on foods representing their country to share with other astronauts. Carbonated products such as colas, however, are avoided as they cause “dry burps” when mixed with gravity.
Moral of the story: foodies probably wouldn’t be too thrilled about the cuisine in space. I’ll stick to my day job, that’s for sure.
[1]. LaRue Huget, Jennifer. Houston, We Have a Menu. The Washington Post. July 21, 2009.
[2]. Suddath, Claire. What Do Astronauts Eat in Space? Time. July 20, 2009.