Pin
I can recall sitting in an undergrad nutrition class (who I believe was taught by the yummiest of professors) and having it explained how much more effective controlling diet for weight loss was than increasing exercise alone. Because really, weight loss is just simple math. To lose one pound, you need to create a deficit of 3,500 calories which can be done through the diet, exercise, or ideally, a combination of the two. With exercise alone, an average-sized adult owes the gym 35 hours of moderate-to-intense exercise, or approximately 35 miles of walking/running. Now that’s not exact science, but it gets the point across: exercise alone will probably lead to osteoarthritis before it gets you to your weight loss goal (half jokingly). Needless to say, that yummy professor solidified my thoughts on proper nutrition — it’s important stuff, especially in regards to weight loss.

TIME put out this article on August 9th explaining why exercise won’t make you thin. In addition to the 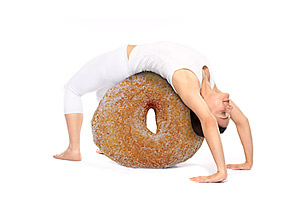 information above, the article explains that some believe exercise to increase their appetite, causing them to eat more and negate the work of their exercise. Some exercisers just make poor decisions because they exercise, likely overestimating the calories they expend during exercise [1].

The article states that there are more than 45 million Americans who belong to a gym, up from 23 million in 1993. Of course, that doesn’t mean that people actually GO to the gym (unfortunately a membership alone does not qualify you as physically active). A study performed by the Minnesota Heart Survey found that more people say they exercise than the number who actually do. The 20-year survey found that the number of individuals saying they exercise rose from 47% in 1980 to 57% in 2000 [1].

Until recently, exercise was deemed an integral part of weight loss, when in fact, its role is largely over-stated. Exercise does, however, play an essential role in fighting chronic disease and in particular, heart disease…as well as cancer and diabetes [1]. So it’s not to say exercise isn’t hugely important…just maybe not so for weight-loss endeavors.

A recent study lead by Dr. Timothy Church randomized 464 overweight, sedentary women into 4 groups. The groups were asked to workout with a trainer for 72 minutes, 136 minutes, and 194 minutes per week for six months, with the last group being a control group. The women were asked to change nothing diet-related and to fill out monthly medical-symptom questionnaires. The results? On average, all the women lost weight. The three groups meeting with the trainer for varying lengths of time did not lose significantly more weight than the control group, however. Some women in each of the four groups actually gained weight — some more than 10 lbs! What happened? Some of the exercising women ate more because the worked out. Some “rewarded” hard work at the gym with an extra treat. Some moved less when they got home because they worked out [1].

Current 2007 recommendations for exercise put out by the American College of Sports Medicine and the American Heart Association include 60 to 90 minutes most days of the week for weight loss. That’s quite a lot for the average Joe [1].

A quote from the article:
“According to calculations published in the journal Obesity Research by a Columbia University team in 2001, a pound of muscle burns approximately six calories a day in a resting body, compared with the two calories that a pound of fat burns. Which means that after you work out hard enough to convert, say, 10 lb. of fat to muscle — a major achievement — you would be able to eat only an extra 40 calories per day, about the amount in a teaspoon of butter, before beginning to gain weight. Good luck with that.”

So today during my TWO hockey games (makes me tired just thinking about it!), I will opt for water in place of my G2 (Gatorade’s low-sugar option). While even I was thinking, “It’s just 100 calories…I’m burning WAY more than that”…I am reminded of otherwise. Thanks,