Pin
Date to lose weight? Yep! But don’t get married, nope. I blogged about marriage and weight gain in the past, and unfortunately for love, the two go hand-in-hand.
A study performed by psychologist Meredith Young, PhD found that women who eat a meal with a man…eat less. Women eating in large groups, however, tend to eat more and also consume foods which are more calorically dense [1]. 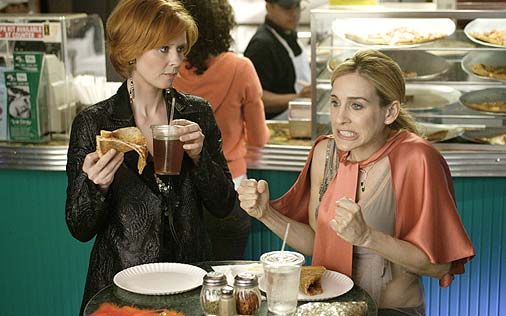 Anyone see the Sex and the City episode where Carrie calls Miranda to meet at “their spot,” a local grease pit. Here Miranda and Carrie gossip over extra large pizza slices into the wee hours of the night. Always an exception to the study results!
Men, however, are a hold different beast. They, unlike women, do not vary their intake based on their company. Young’s research found that neither companions nor the gender makeup of the group had any impact on what men consumed. The results were all published online in the journal Appetite [1].
During the study, it was found that the average caloric intake for a meal was 716 calories for men and 609 calories for women. When women ate with men, they consumed 552 calories, but when eating with other women, the women consumed 665 calories – more than they would’ve consumed eating on their own. When a woman eats in a mixed group, she also eats less than when eating with only other women. Young explains, “As soon as there is a man in the mix, the amount of calories a woman eats decreases” [1].
How many women is too many? When three women dine together, they intake an average of 650 calories. When a fourth woman is added – the damage goes up to 800 calories a piece. Wowza!
The logic? Sarah-Jeanne Salvy, PhD and assistant professor of pediatrics at the State University of New York at Buffalo explains that people often manipulate the amount of food they eat to “convey a positive impression.” She goes on to say that “eating like someone else would be integrating yourself” while women eating in front of men commonly consume less in order to appear more feminine and in control [1].
Similarly, Salvy found that overweight children who eat in the presence of their overweight friends eat more than those who eat with someone they don’t know. Does it have to be an overweight friend that’s making us eat more? Nope. Salvy found that whether it be a friend or a complete stranger, the fact that their company was overweight was enough drive for the individual to consume more [1]. Subconsciously, of course.
Just something to be aware of…but you may want to eat in a closet just in case!
[1]. Doheny, Kathleen. Ladies’ Night Out A Diet Wrecker. WebMD Health News. August 5, 2009.