Pin
After the soda tax poll, writing on this study seemed only appropriate. I am NOT justifying the partaking of ANY carbonated beverage, but for my one-a-day diet soda habit, I’ll take the Splenda and leave the 160 calories for another waistline. I digress….

A study published by the 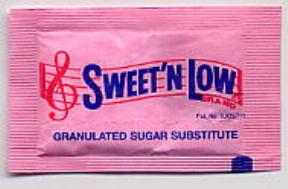 In Milan, Christina Boselli conducted case-controlled studies between 1991 and 2004 among “users” and “non-users” of artificial sweeteners. Among the data included there were 230 people were diagnosed with stomach cancer and 547 were healthy controls. Another 326 diagnosed with pancreatic cancer were included, with another 652 health controls. And yet another 454 persons diagnosed with edometrial cancer were included with another 908 healthy controls. The results were adjusted for confounding factors. None of the data produced results showing cancer-causing effects of cancer and nor did one artificial sweetener over the others [1].

Limitations of the study should be noted. Firstly, the included data was that of Italians only. Secondly, only three types of cancer were studied [1].

Another study sponsored by the National Cancer Institute showed no significant difference between groups consuming asparatme and incidences of leukemia, lymphoma, or brain tumors. This large-scale study included 285,079 men and 188,905 women, all aged 50 to 69 years [1].

Yet another study review published in 2007 in Critical Reviews in Toxicology showed that adverse effects of artificial sweeteners had “no credible scientific basis”. This particular review included a panel of 8 experts over the course of 11 months. Over 500 studies, articles, and reports completed over the 25 years prior were included. Some of the included data was unpublished, but submitted to government bodies for regulatory process approvals [1].

My take: if you have to choose one…choose diet. Artificial sweeteners, no matter how they are chemically modified to be calorie-free are NOT natural products. Just my $0.02 on soda — anyone care to share theirs?

TGIF!!! Have a great weekend!