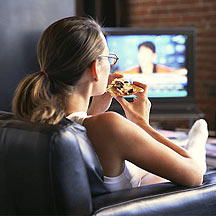 Recent animal research shows dramatic weight gain among mice who are “allowed to eat during the light phase — their ‘wrong’ time of the day.” The research was recently published online in the journal Obesity. Until I read this article, I never really thought the timing of intake mattered as much as the caloric intake itself. Did you?
In the study design, two nocturnal groups of mice (who thus eat at night) were given the same high-fat diet. One group of mice was given 12-hour daytime access to the food while the other group was given 12-hour nighttime access to the food. After six weeks, the mice eating during the day (their normal sleep time), gained much more weight than the mice eating at night (their typical eating time). How drastic was the weight gain? The nighttime munchers gained a whopping 20% while the daytime eaters gained an jaw-dropping 48%! And astonishingly, there was no difference in the average amount of calories consumed between the two groups of mice.
The only variable to point to was the times the mice were eating [1].
And here’s the proposed logic. According to Arble, the study conductor, there is “interplay between body temperature, metabolic hormones such as leptin, and the sleep-wake cycle…Eating at night is contradicting your body’s natural circadian rhythm. The leptin levels are starting to rise, and are supposed to be discouraging you from eating [1].”
Arline Salbe, PhD and a senior research fellow at Kronos Longevity Research Institute in Phoenix confirms Arble’s results with her own. In her own study, she and her colleagues evaluated the food intake of 94 people over the course of three days. Of the 94 participants, 29 were “night eaters” — consuming food between the hours of 11pm and 5am. After following the patients for nearly 3 1/2 years, the night eaters gained 13.6 pounds while the non-night eaters gained 3.7 pounds. These results were published in The American Journal of Clinical Nutrition [1].
The bottom-line advice: 3 meals a day with a snack around 8 or 9pm if dinner is early enough.
[1]. Doheny, Kathleen. Study Shows Eating at the ‘Wrong’ Time of Day Could Lead to Weight Gain. WebMD. September 3, 2009.