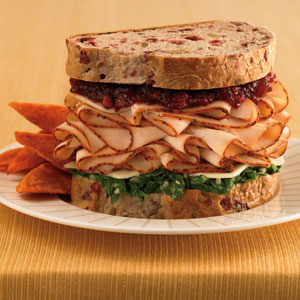 Wonder why that pre-packaged turkey breast has an expiration date 6 weeks away? Me too.

The deli meat business brought in roughly $17 billion dollars in 2004 according to a report by Packaged Facts. There are 3 types of deli meats out there: whole cuts of meat (roast beef, turkey breast), sectioned and formed prodcuts (cooked hams), and processed products (bologna). Most all lunch meats contain nitrites and nitrates which are preservatives, coloring, and flavoring additives which have been linked to some forms of cancer, such as stomach, liver, esophagus, mouth, and larynx [1].

Processed meat consumption has been associated with an increased risk of stomach cancer in some epidemiological studies among Swedish women according to the National Institute of Environmental Medicine, published in the International Journal of Cancer in 2006. The culprit to blame? Nitrosamines, it seems. The study prospectively examined the association between intakes of processed meat, other meats, and N-nitrosodimethylamine (most frequently found in nitrosamine-containing foods). A total of 61,433 women were included in the study. After an 18-year follow-up, there were 156 incidences of stomach cancer which appeared more prevalently in those women consuming higher levels of processed meats, but not of other meats such as red meat, fish, and poultry. Stomach cancer risk was 2-fold higher among women in the top quintile of N-nitrosodimethylamine intake when compared with the bottom quintile. And thus, high consumption of processed meats may lead to an increased risk of stomach cancer [2].

When shopping for lunch meats, you may have seen some verbage along the lines of, “contains up to 10% added moisture”. Many lunchmeats, including ham, roast beef, and turkey contain added solutions of water, sodium, and water with spices [1], which can drastically increase the sodium content of these meat products [1].

According to one source, cold cuts will last only 3 to 5 days after being opened while deli cuts will only last one to three days [1]. Consume safely!

Monosodium glutamate (MSG), a flavor enhancer, is also found in various lunch meats. MSG is recognized by the Food and Drug Administration (FDA) as “GRAS” (generally recognized as safe). Long-standing research has made no definitive link between MSG and serious health risks, including Alzheimer’s disease and various cancers. Noted, however, are short-term reactions to MSG ingestion, such as: headache, flushing, sweating, sense of facial pressure or tightness, numbness, tingling, or burning around the mouth, fluttering heartbeats, chest pain, shortness of breath, nausea, and weakness. Symptoms reported are generally mild, according to Mayo Clinic [3].

[1]. 15 Things You NEver Thought You Needed to Know About Lunchmeat. SixWise.