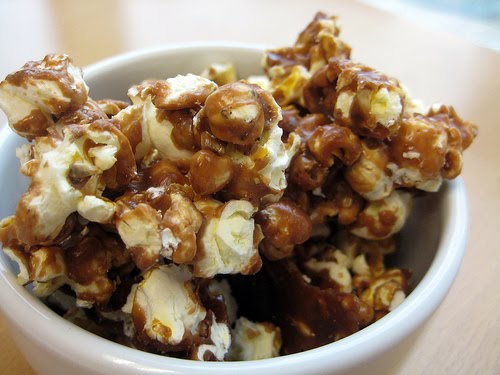 I feel like I MAY be the ONLY dietitian NOT at the Food and Nutrition Conference and Expo this week. Sad! The timing just didn’t work out for this year, but I’m feeling very left out of the loop! Instead, I’m home answering the door for every Boy Scout within a ten mile radius…buying chocolate caramel corn – ahhhh! I sold way too many Girl Scout Cookies back in the day to turn down any kiddo going door-to-door selling some delicious goodies!
Anywho, in nutrition news….
Three small California companies (Arena Pharmeceuticals, Orexigen Therapeutics, and Vivus) are planning to submit their anti-obesity drug for FDA approval in the coming months, becoming available on the market as soon as late 2010 or 2011 [1].
Jack Lief, chief executive of Arena Pharmeceuticals, believe anti-obesity drugs to become “bigger” than statins (such as Lipitor) which generated $12.4 billion in global sales last year [1].
The new drug being formulated is aiming to avoid unpleasant side effects which have deterred users from using other FDA-approved weight-loss drugs, such as Alli. The new weight loss drug will include a combination of two drugs, which many experts deem more effective than a single medicine [1].
In clinical trials of the three new weight-loss drugs, patients have lost an average of 3-10% of their starting body weight after just one year. Vivus’s drug (Qnexa) produced the greatest weight loss in clinical trials, and the company’s stock is up 90% this year [1]!
Some experts are stating these latest weight loss drugs as no better than current weight loss drugs, and that overall, weight loss is modest. The new drugs work through the central nervous system to influence appetite. The leading concern from the FDA is the psychological side effects of such drugs [1].
Interesting, none-the-less. Any thoughts for or against weight-loss drugs? Concerns?
While I can consider weight-loss drugs an “aid” in weight-loss efforts, similar to gastric bypass and gastric banding, the behavior and lifestyle changes are still necessary for long-term weight maintenance. I see SO MANY gastric bypass patients who go through the “honeymoon phase” of weight-loss in the months following their operation, watching the weight just melt away. In the years following, however, poor and excessive food choices and a sedentary lifestyle lead back to rapid weight gain. Whether a weight loss aid of drugs or surgery, the need for diet and lifestyle changes are still of utmost importance in my mind.
Yesterday’s diet looked like this…
Breakfast:
1 cup prepared steel cut oats (2 carbs)
1 Tbsp pumpkin butter (1 carb)
1 tsp Splenda brown sugar (0 carbs)
Total: 3 carbs
Lunch:
1 serving Chicken Tamale Casserole (2 1/2 carbs)
1 small apple
Total: 3 carbs
Dinner:
1 medium toss salad with 2 Tbsp ranch dressing, 1 ounce cheddar cheese, green peppers, egg whites, mushrooms, carrots, tomatoes, and banana peppers (1 carbs)
1 small slice deep dish pizza (2 carbs)
Total: 3 carbs
Snack:
2 graham crackers with low-fat cream cheese (1 carb)
Total: 1 carb
Exercise: 90-minute hockey game
[1]. Pollack, Andrea. Medicine’s Elusive Goal: A Sage Weight-Loss Drug. The New York Times. October 16, 2009.