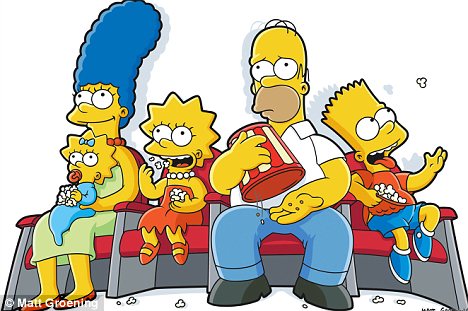 America’s doughnut-loving, beer-guzzling Homer Simpson and his cartoon family have been chosen by the Department of Health to help promote its anti-obesity campaign. While the government is spending mega bucks on sponsoring episodes of The Simpsons for three months to promote its anti-obesity campaign, they seem reluctant to endorse fully the family’s eating habits. The chose slogan for the campaign is “Supporting the Simpsons: Sometimes [1].”
Officials state that despite unruly behavior, Bart Simpson participates in the recommended 60 minutes of exercise daily, while his sister, Lisa, is a vegetarian and likely consuming the recommended 5 servings of fruits and vegetables daily. At the beginning of sponsored episodes, the posed cartoon characters will be shown sitting on the sofa eating pizza, ice cream, and chips. The characters will then have their food disappear, and replaced with food items such as carrots, apples, and pears [1].
Gillian Merron, the public health minister states, “The Simpsons are a much-loved, close-knit family facing some of the everyday challenges that modernday families go through. They provide a popular and engaging way to get the message to real-life families about simple ways of improving their diet and activity for a healthier lifestyle.” Professor Gerard Hastings makes a valid point in explaining how the public may be more likely to listen to healthy-living tips if they come from imperfect characters [1].
On a completely unrelated note, more research in support of a Mediterranean diet…
Don’t wait til you feel blue to consider adopting the Mediterranean diet rich in fruits, vegetables, whole grains, fish, and nuts. Those following the Mediterranean diet were less likely to develop depression, according to a Spanish study. The study results offered a 42-51% reduction in relative risk of developing depression, reports Dr. Miguel Martinez-Gonzalez, chair of preventative medicine at the University of Navarra [2].

Known for its recommended use in preventing heart disease and stroke, the Mediterranean diet is one of few diets to be assessed for its effect on mental function. Data for this study was collected between 1999 and 2005, including more than 10,000 adults. All participants did not suffer from depression at the beginning of the study. Adherence to the Mediterranean diet was assessed by measuring nine components such as low meat intake, moderate intake of alcohol and dairy, and high fruit, vegetable, nut, cereal, and fish intake [2].

Martinez-Gonzales proposes the role of the Mediterranean diet in the proper functioning of the endothelium, the delicate inner lining of blood vessels, which is involved in the production of brain-deprived neurotrophic factor (BDNF), which is responsible for the growth and function of nerve cells and thought to be responsible for some depression cases. Similar to Prozac, olive oil improves the binding of serotonin to its receptors, increasing the availability of serotonin to the brain [2].