It’s always a mistake to grocery shop with Mr. Prevention. I get bombarded with comments on prices and how, “It would be sooo much cheaper if I _______________!” Fill in that blank with any number of possibilities. On our most recent grocery shopping extravaganza he made a point to stop in the marinara section to point out that a 3-cup jar of marinara was on sale for $1.

I know better than to turn to the label and point out the preservatives and and undesirable ingredients (because really, why is there HFCS in marinara sauce?). EVEN IF it is only $1. Dare I even suggest that I enjoy cooking from scratch? And obviously I enjoy good food.

I grew up on jarred marinara. Classico’s marinara, to be exact. And, it’s good. But it’s no match for a slow-cooked, meaty marinara made from scratch. No offense, mom. At least it wasn’t Prego! 😉 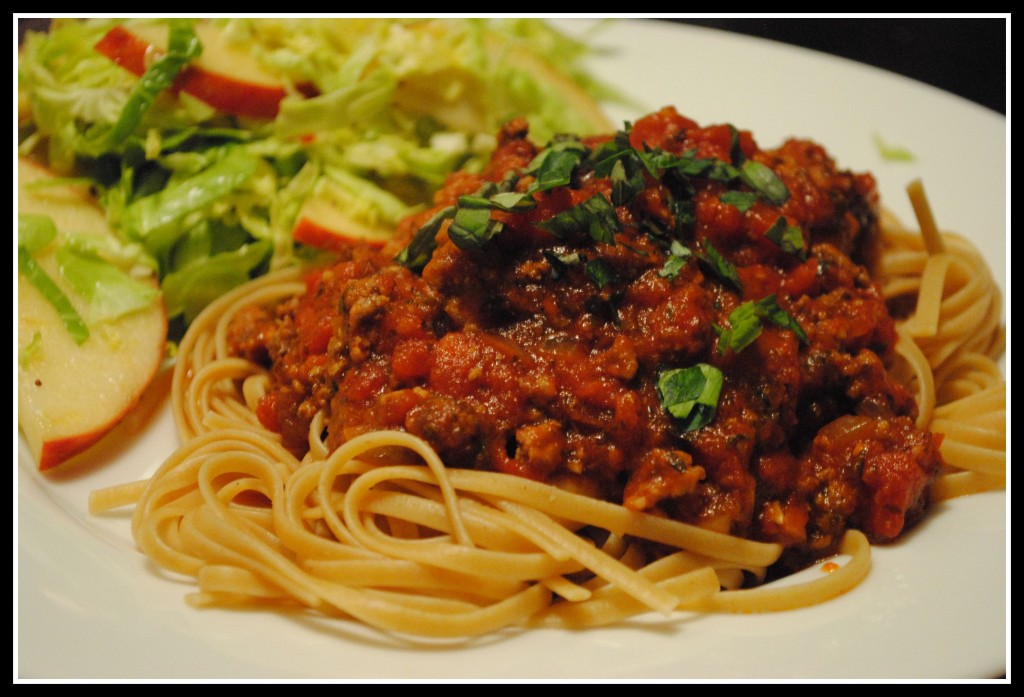 Brown meats and onion in a skillet and drain well. Transfer to your crock pot.

Result: This was a meaty, rich, and hearty spaghetti sauce. I used low-sodium and no added salt canned products to help reduce the sodium content (with all the canned goods, my sodium intake has been too high!). You can always add salt, so don’t worry about losing flavor. The meat (especially the pork) is so flavorful that the tomatoes will take on the flavor of the meat and spices rather than salt. Delicious and easy! Enjoy!

The second half of the last night’s dinner story has to do with wheatballs — a vegan “meatball” remake. To say they were a fail would be a massive understatement. They smelled great and all of the individual ingredients were all fine by me, but chickpeas + vital wheat gluten + soy sauce + nutritional yeast + wheat bran + garlic + parsley + olive oil = boooooooooonk. Fail. I hate to waste, but after trying them…my gag reflex kicked in.

Firstly, some things just aren’t meant to be made vegan. I’ll add meatballs to that list of vegan no-go’s. Secondly, unless it’s cookie dough, I’m not interested in eating dough. This is likely the reason gnocchi doesn’t interest me, either.

I should’ve taken a picture, but I didn’t. I think I was too sad over wasting food. But I vow to bring you the good, bad, and ugly on my blog. These….were ugly. 🙁 Crock Pot Spaghetti Sauce…was good! 😀 You can’t win’em all and I was about due for a major fail.

Question: Jarred spaghetti sauce, or from scratch? Meaty, or meatless?

FYI: Fish consumption is at an all-time high in the world. Love it! 😀