I think the best thing that came out of today was being able to re-learn, first-hand, admiration and respect for athletes. My racing days are far and few between if compared to 6-7 years ago, and it’s so fun to feel that “high” that a sport can bring. The other thing I learned is that biking and running are both things I like and enjoy, and am pretty decent at…but doing one after the other is NOT an easy task. More on that later.

My alarm went off at 5:30am, though my body was convinced at 2:40am that it was time to get up. Pre-race anxiety…it always happens to me. I had a slice of wheat toast and peanut butter with about 2 cups of iced coffee for breakfast. We were on the road by 6 and the race was a short 20 minute drive to a state park.

I got my bib and chip and set-up my bike in the transition station. Apparently there were a lot of 25-29 year-olds racing because our bike racks were packed. And as I learned online, some racers can be very *ahem* territorial about their transition station. Think towels, fruit, Powerbars, water, iPods, shoes, clothes…everything they own. Honestly, people brought a ton of stuff…iwas kind of ridiculous. But, whatever. Obvious I am 1) a novice and 2) not out to win. The only “trinket” I had with me was my Garmin 305 (which is worth its weight in gold, by the way…love it). I digress. I very politely asked a woman if I could move her bike over a few inches to get mine to fit. She shot me some pretty sharp eye daggers (whatever, dude), and I just said thank you and moved on. Luckily, I didn’t come back to a flat tire, so I guess I didn’t tick her off that badly. 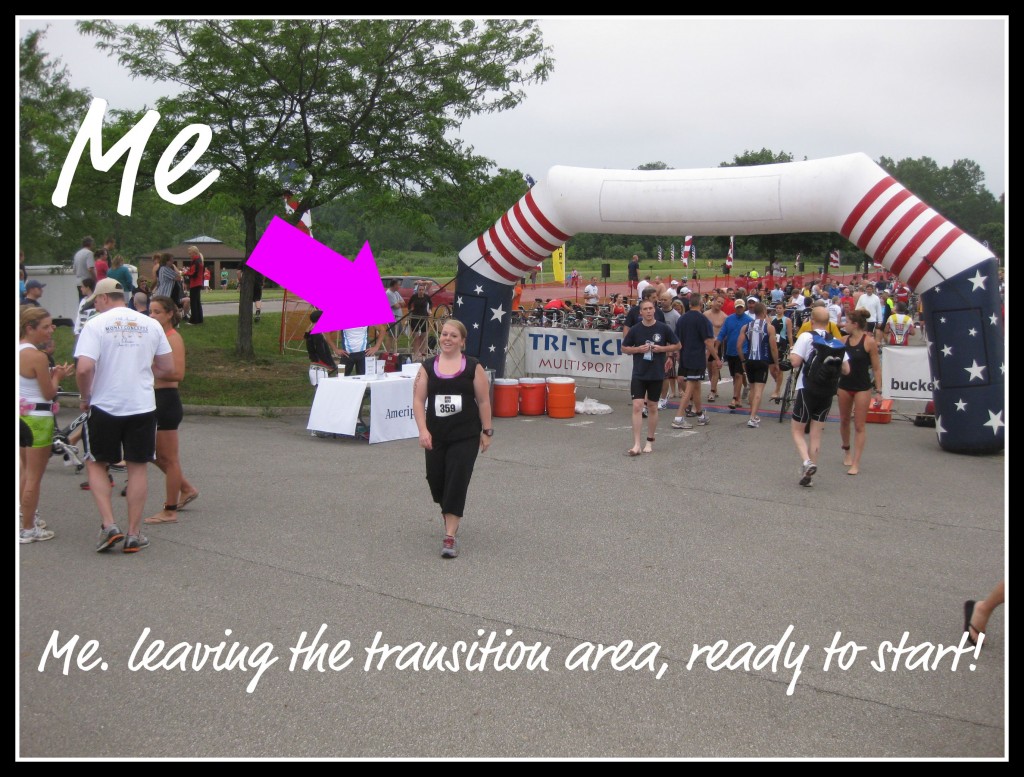 The race started…almost without me (always a line at the bathroom…always). But off I went. I didn’t want to go out too hard for the first 2, but my body seemed to fall into a pace of about 9:30/mile. I finished the first 2 miles (just an out-and-back…*yawn*) and was out of the transition station, hopping on my bike at 20 minutes. Not too shabby. 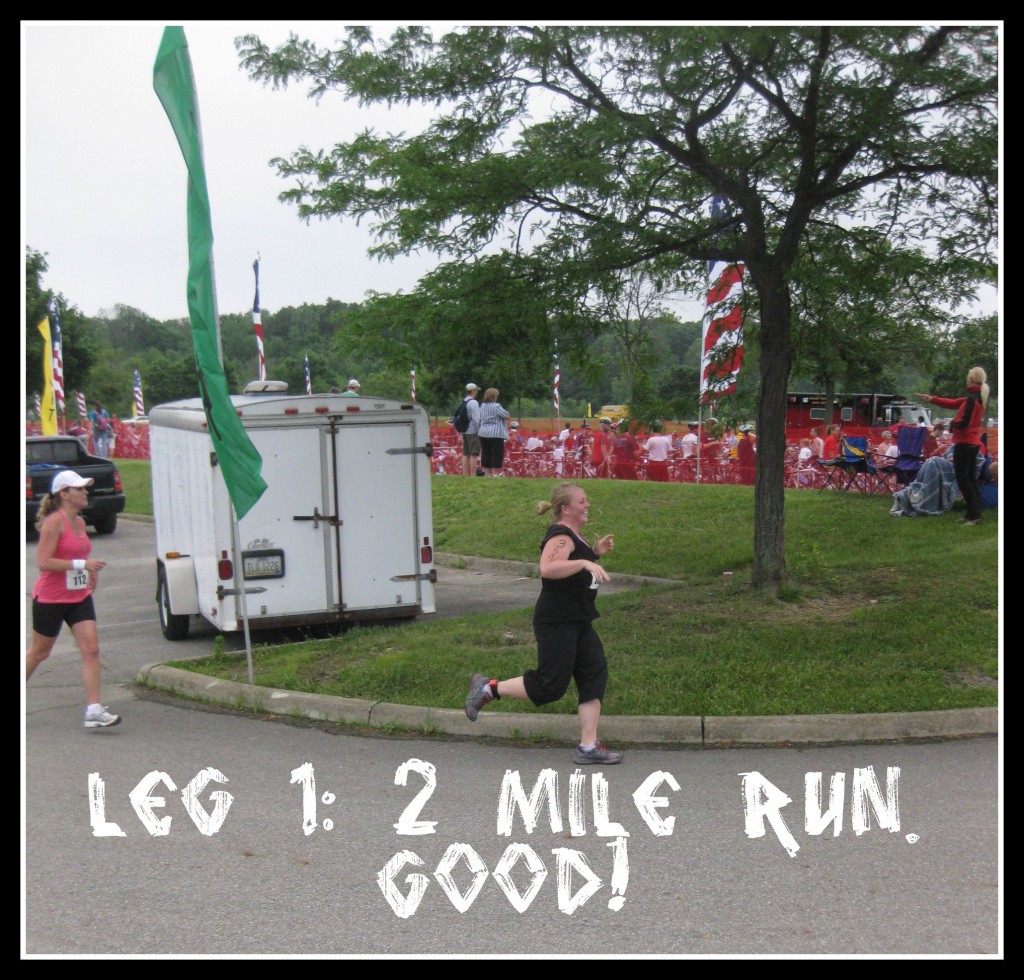 The bike, honestly, was awesome. Until the end…but more on that in a second. The bike was 17ish miles and was one huge loop on country roads, around the state park. As I had been warned, road bikes trump mountain bikes when it comes to speed. There was one point a dude FLEW past me, I glanced down at my Garmin, and I was going 3:26/mile. Um, whoa. He literally flew past me as though I was riding still. No wonder biking can be dangerous. He was one of many to pass me, however. I passed one person…also on a mountain bike (yay!). But other than that, I was just getting passed all over the place as the triathletes finished the swim portion in their waves. But it was good to have that motivation all along versus being out in the country biking by myself. So, yes, the bike was awesome….some rolling hills. And then…the last 1.5 miles…HUGE HILL. I kid you not, this hill was the better part of a mile, all uphill. And then, off to the right, you can see the competitors running (and completing, no less!) the 5K – um, I wanted to be there. My legs were toast by the time I got to the top. I just lowered my head and focused on one stroke at a time. Oy. Brutal. Once the road leveled out at the top and I had a few seconds to recover, I finished strong. I don’t know exactly how long the bike took me, but I know I finished 14.26 miles in an hour. I do know that that hill sure as heck slowed me down! 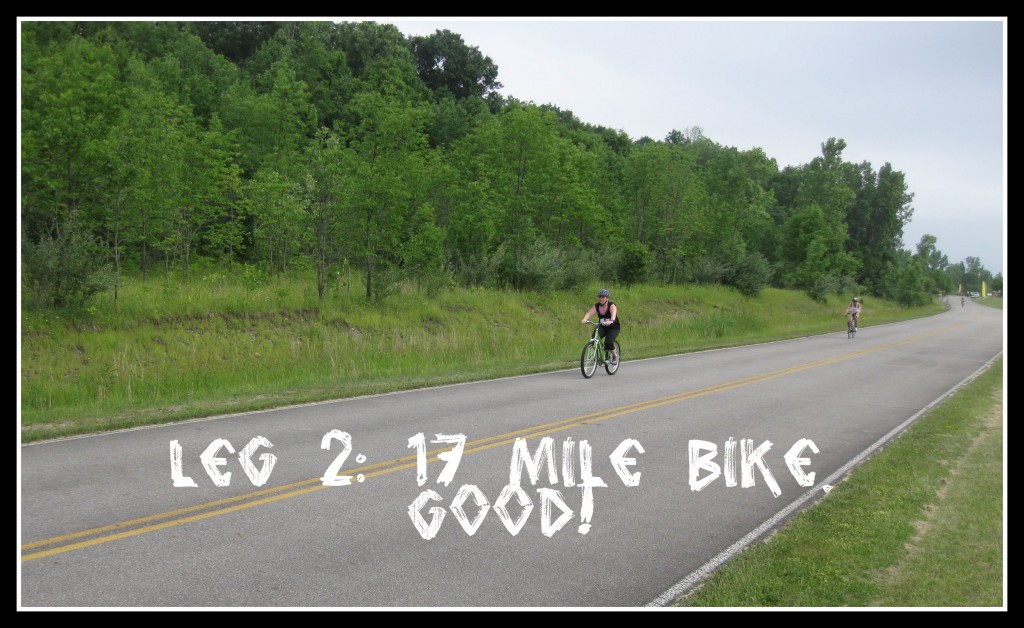 And then I got off the bike. Owww. Agony, even. My legs moved like the tin man’s and felt like concrete. I can honestly say that at that point I didn’t know if I could do the 5K to finish. My legs felt heavier than during any marathon I’ve done in the past…and I hadn’t even started running. But I put up my bike and headed out. Whatever I did during that 5K was done through mental strength alone, because there was nothing left in the tank. It was literally a decision to put one foot in front of the other each with every step I made, but it was a little helpful at that point to look off to the left and see bikers on that hellish hill! I wanted to walk…so…badly. But, no. I thought about this blog, and about Samantha doing her marathon, and about all the times I’ve been competing and wanted to walk or give up. No way, Nicole. One foot in front of the other. And I did. I “ran” all 5K with an average pace of about 12:30 min/mile (I’m guesstimating). It was hard, but I’m so glad I pushed through. 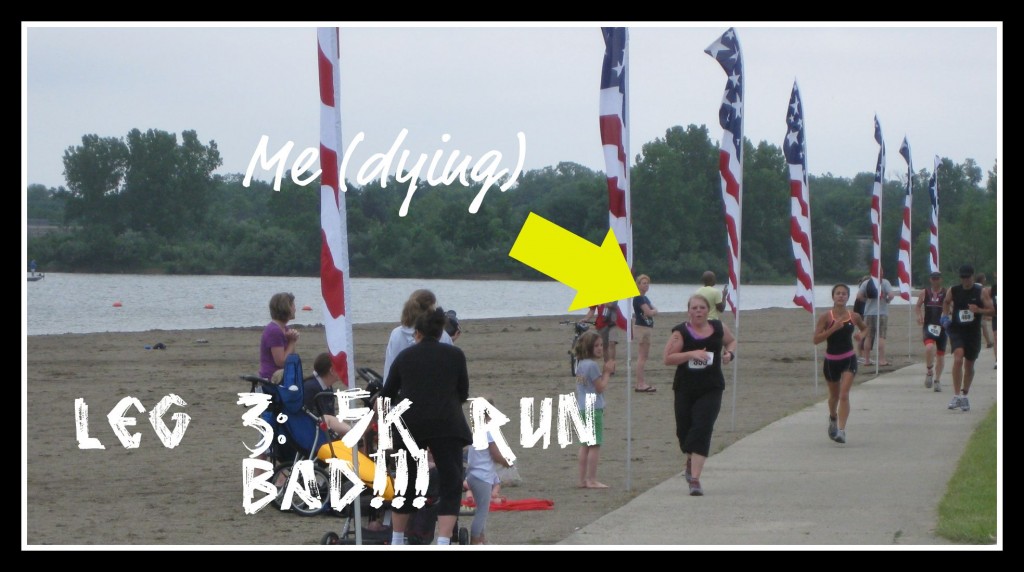 I finished (yay!) in about 2 hours and 12 minutes — I forgot to stop my Garmin because I immediately went for the Gatorade. I’m guessing one piece of toast wasn’t enough this morning, and as much as I tried to hydrate yesterday, I probably could’ve done a better job of it. 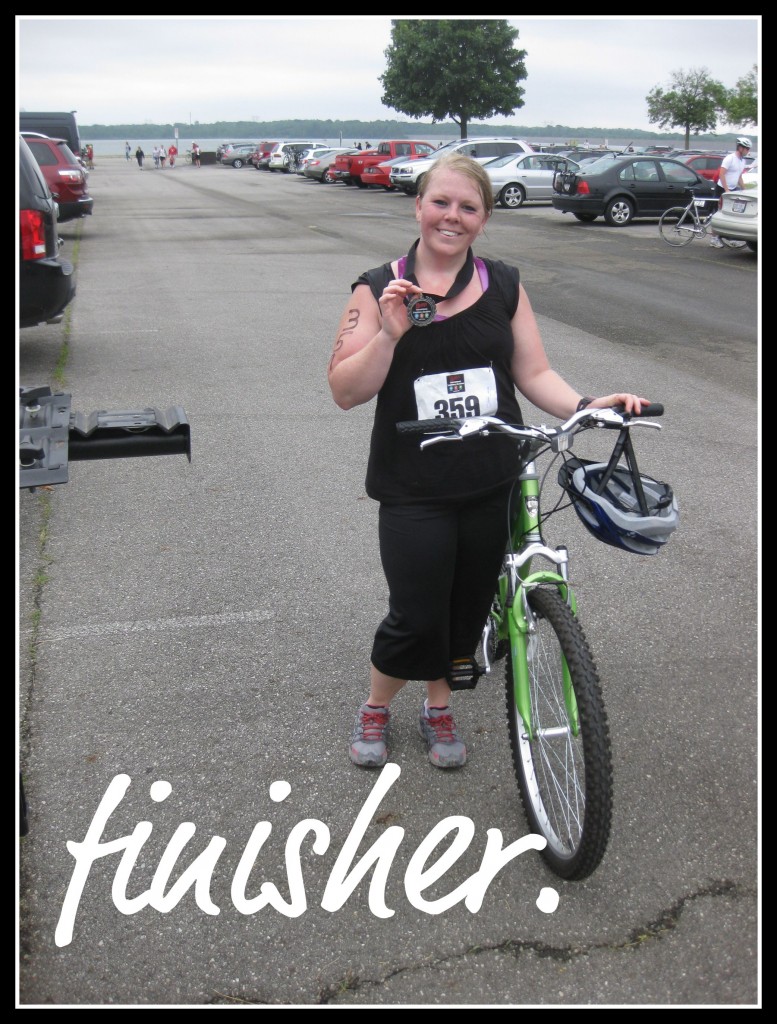 But, wooo! So happy I chose to do the duathlon…nearly untrained! I have a lot of respect for duathletes and triathletes – it’s incredible to see such dedicated and passionate individuals putting their everything into a race.

After getting home and showering, I spent a good 15 minutes stretching (this girl has a hockey game at 6pm tonight!) and then plopped into bed for a nap.

And in food news…weekly menu!

Thanks for reading and all your support!

Question: If you had to choose, would you rather run-bike-run (duathlon) or swim-bike-run (triathlon)?