I was undecided as to whether or not I was going to blog about our trip, but since I kept a journal during the trip, I figured…why not? If you’re waiting for new food and recipes, check back on Wednesday when regular blogging will resume 😉

Day 1 and 2: Travel. We drove from Columbus to Chicago for 1) one less connection and 2) to leave Miss Lily with my folks. So on Wednesday, after a half day of work, was finishing packing, getting Lily to the vet (obviously she would get an infection the day we’re leaving), and then get us to Chicago. Thank you, Chicago, for the lack of traffic 🙂 On Thursday our flight departed at 12:50pm. It left on time and all was well. I had mentally prepared for torture, so when the 14 1/2 hour flight went pretty quickly, I was really pleased. I slept at least half the trip, but I would venture to guess closer to 2/3rds. How or why I was able to fall asleep at 1pm Chicago time for 5 hours is beyond me, but I’m not complaining, and that snooze helped me adjust to Singapore’s time of 12 hours ahead of Central time.

We arrived in Hong Kong and had a 2 hour layover. They had free Internet stations which was awesome and somehow, I helped myself to another hour long nap. The next flight to Singapore was somewhere between 3 1/2 and 4 hours which obviously seemed like a breeze, especially since I, once again, slept for a good portion of it. The food on the planes were foul and word to the wise: always select the vegetarian option while flying. Row 60 always got what was left…ew.

We arrived in Singapore at about midnight local time and had a heck of a time with customs. After 40 minutes wasted there, we had claimed our baggage and our friend, Lena, was there waiting for us. When we stepped outside of the airport (again, midnight local time) the heat was brutal…and the humidity, wow. We chatted with Lena after getting back to her beautiful condo in Singapore and headed to sleep at about 2:30am. 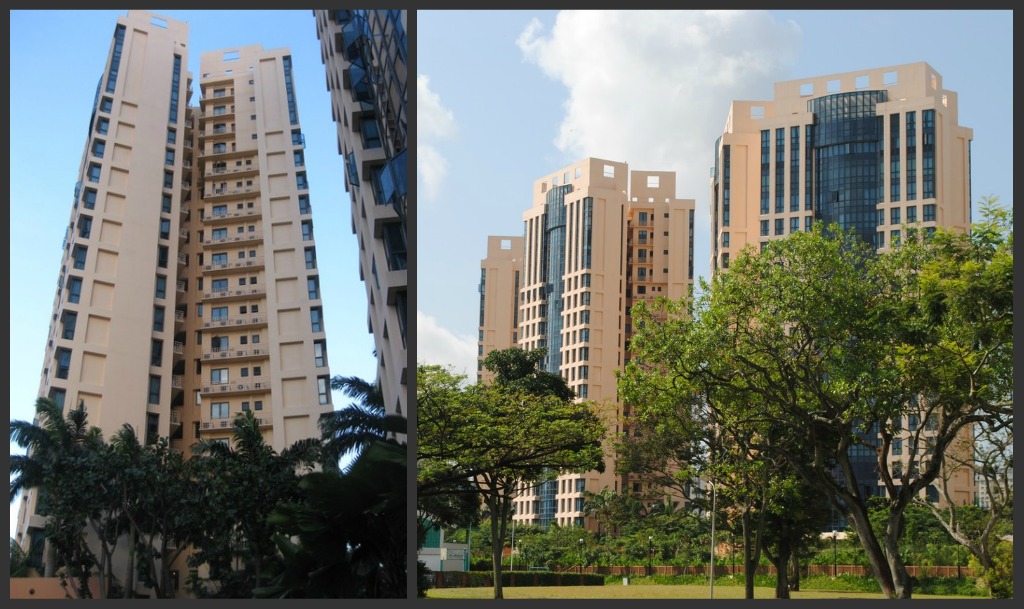 Day 3: Up at 7am…not too surprising. Once the gang was up and ready to go we headed out to Orchard Street which is basically a mega indoor/outdoor/underground mall. This mall was so clean, I would’ve eaten off the floor…5 second rule aside. Gorgeous! There happened to be a Food Fest/Fair going on, so we stopped in there and tried a BBQ pork bun. It was this sweet, shredded pork inside a really doughy bun that had been steamed to perfection. 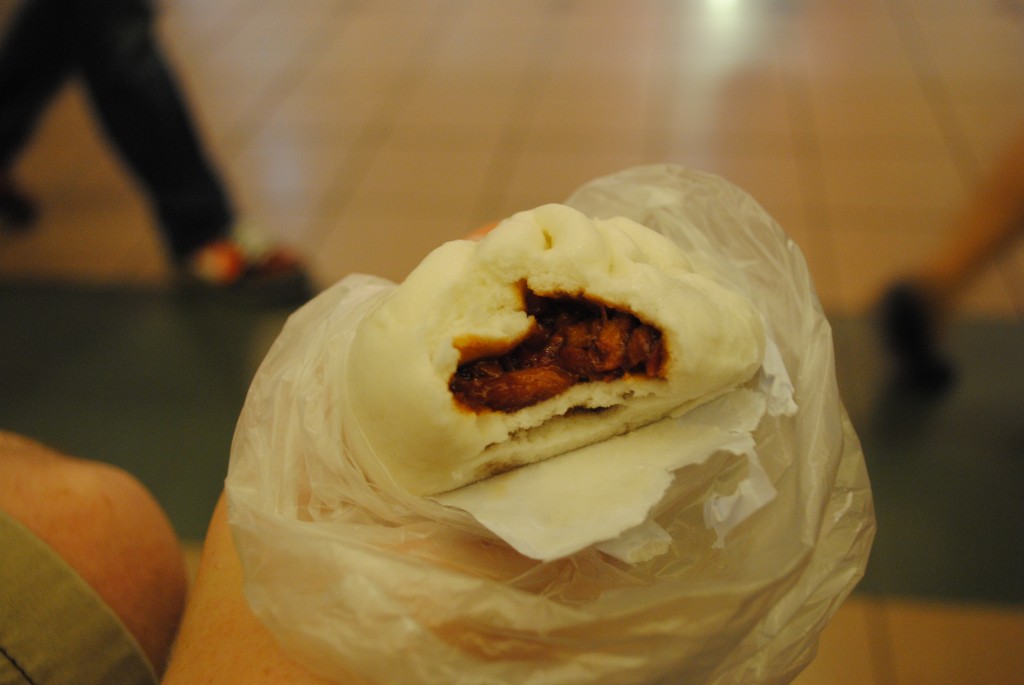 After touring Orchard Street/mall, we took the bus to Little India. We walked our way through all of the shops and down the main strip and stopped off at a tourist book recommended Indian restaurant that served their meals on banana leafs. We ordered lots of things to share, and I enjoyed some fresh coconut water! 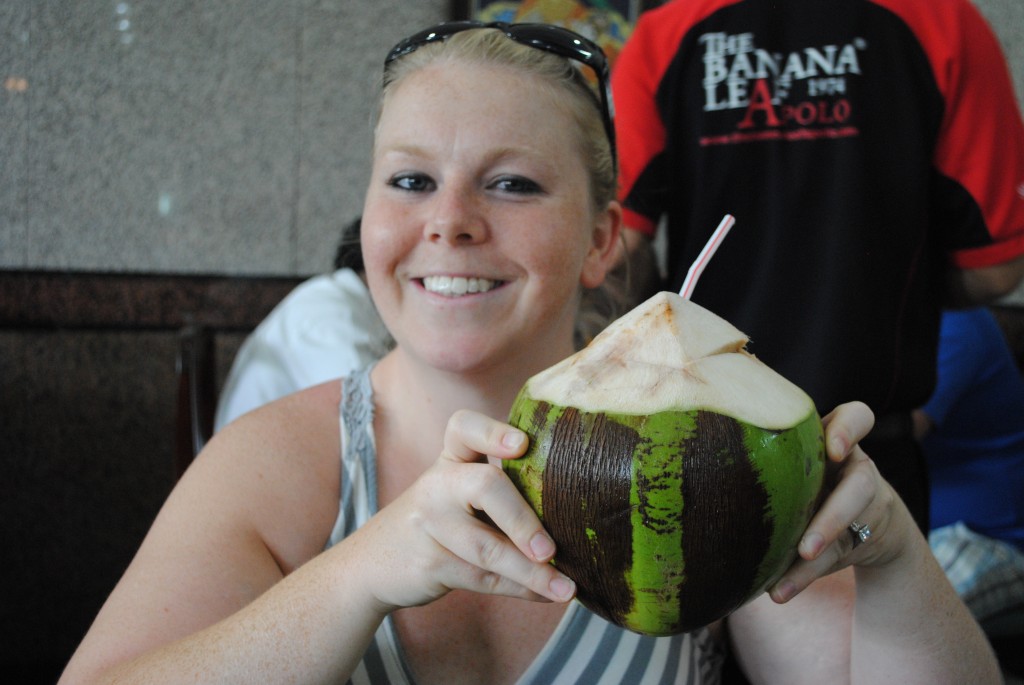 From Little India we hopped on the (very clean and new) MRT (train) to Chinatown and walked through Chinatown and some of the temples. We witnessed a very impressive hymnal/chant/prayer that was being recited in unison with several dozen people in the temple. You could see the Chinese print in the books from which they were reciting and the speed at which they were reading/singing was amazing. Very cool. 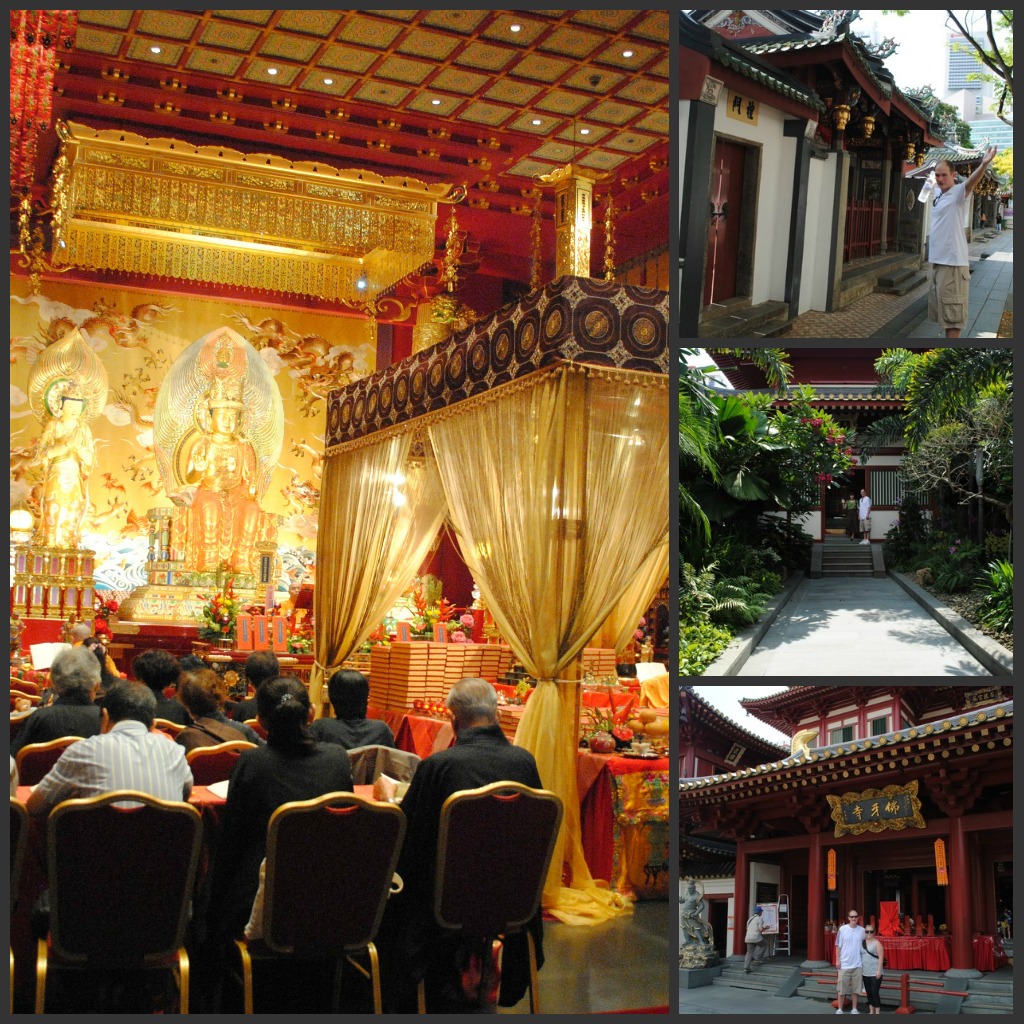 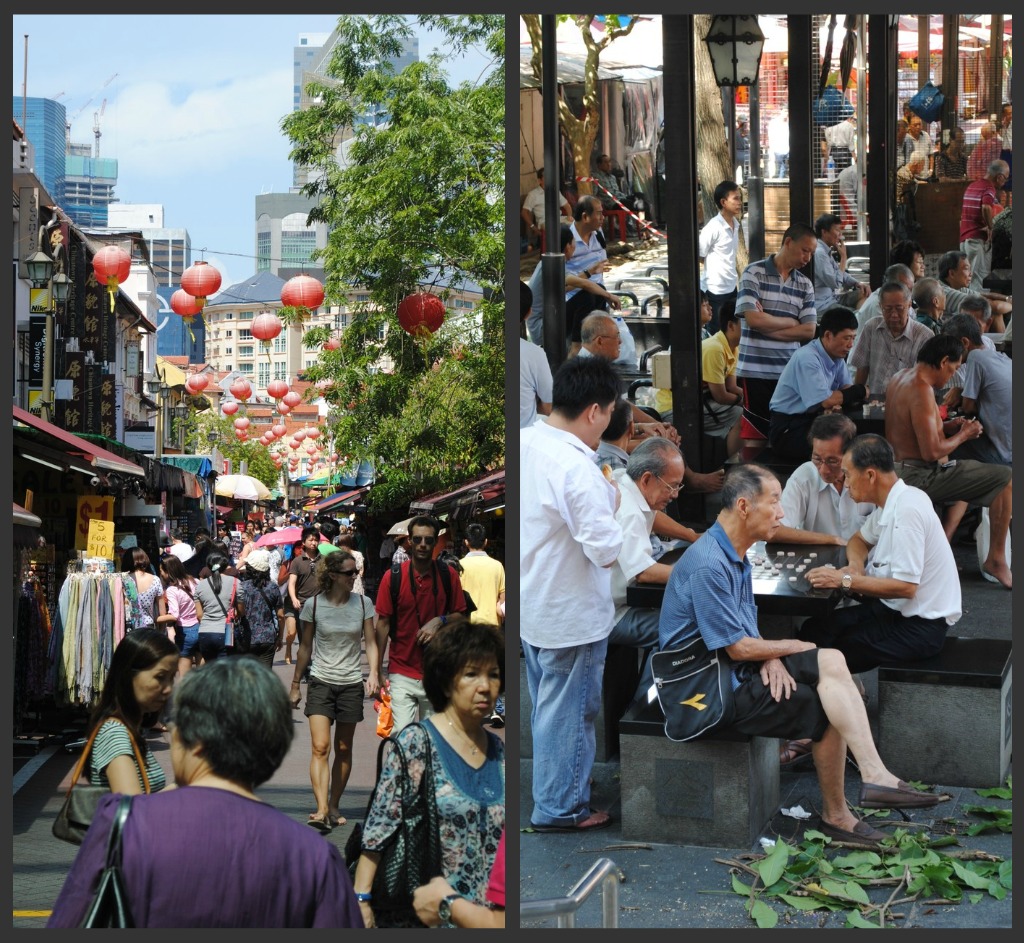 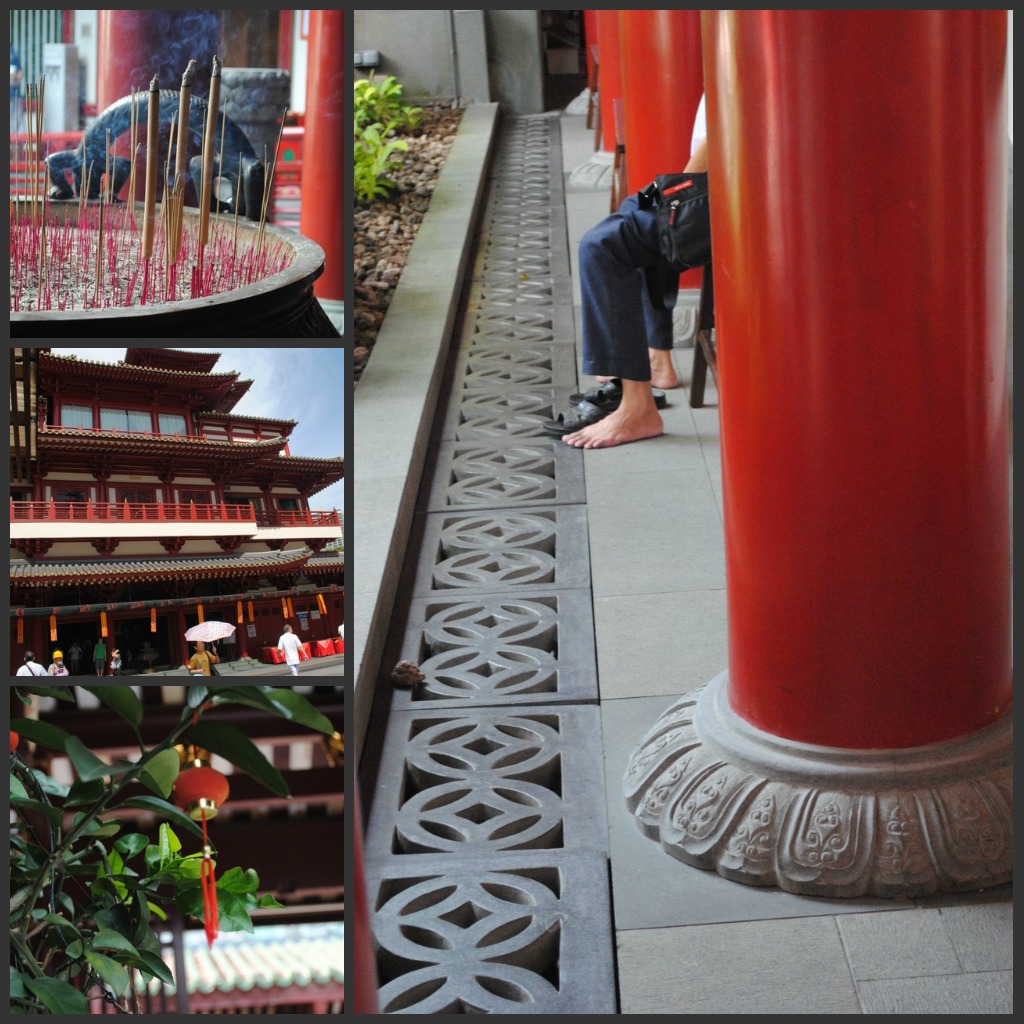 Also in Chinatown, we got to see a fresh produce, seafood, and meat market. Most selections of fruits and vegetables were $1 at the market while a bag of Hershey Kisses were priced at $10+ (eek!). In addition to fresh fruits and vegetables, there were also fresh fish, prawns, eel, frogs, etc. 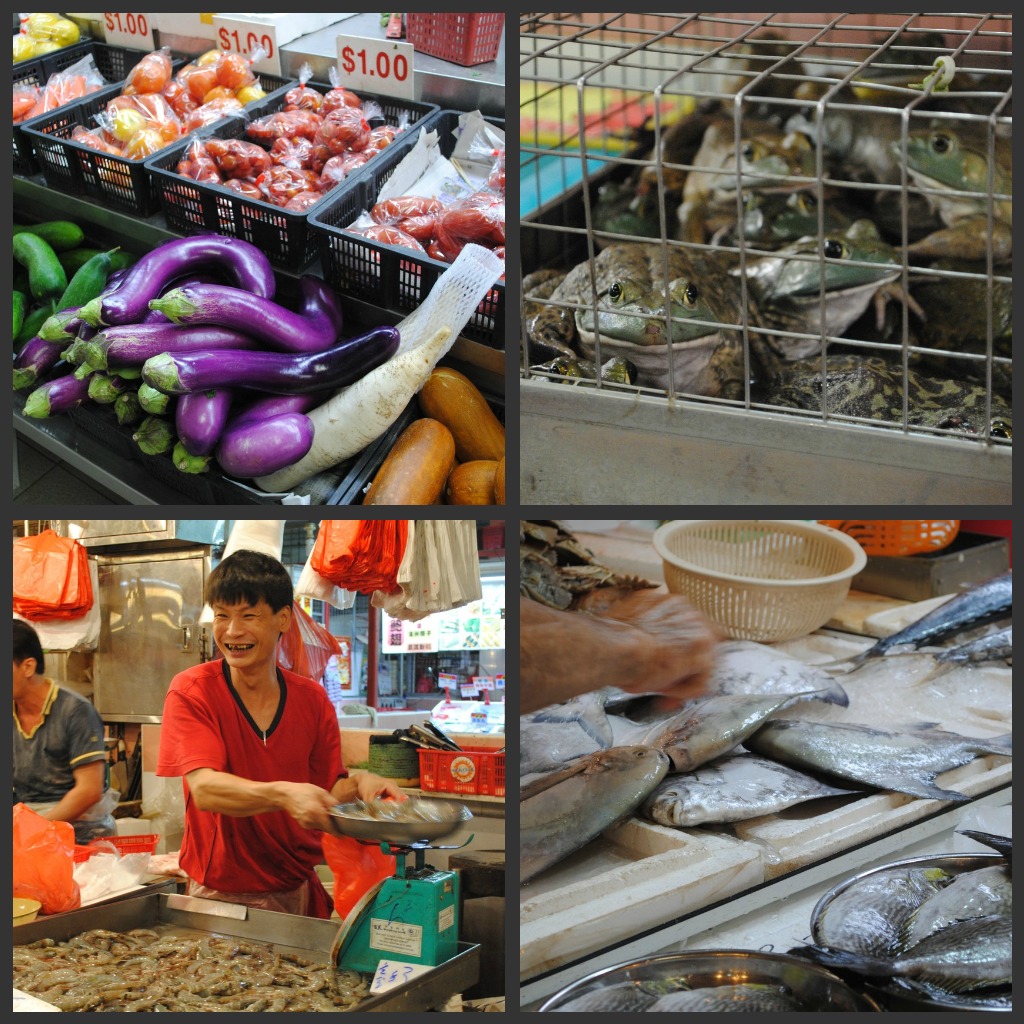 We napped in the afternoon and headed out for the Singaporean dish of chili crab at a restaurant called Jumbo. We took a cab down to the water and had a great table nearest to the water. The chili crab was spicy and MESSY, but very, very good. The chili crab sauce was incredible and we ordered a several batches of these hot mini buns to dip in the sauce. We also tried a dish of greens that to me, appeared to be baby bok choy with scallops in oyster sauce. It was excellent, as well.

From dinner we walked along the water and had ice cream and cocktail. The weather was beautiful (still hot, but not as bad!) and there was a nice little breeze 😉

Day 4: We toodled around in the morning and attended a Muay Thai class at noon. There were about 8 or 9 people in the class and after the warm-up of stretching, push-ups, sit-ups, and jumping rope, Mr. P and I were pulled away from the group to learn the basics. Having taken kickboxing before, it was not all foreign, but the Thai arts lead with the left which is very confusing for this righty. It was a great workout and it definitely left me sore, especially my arms. 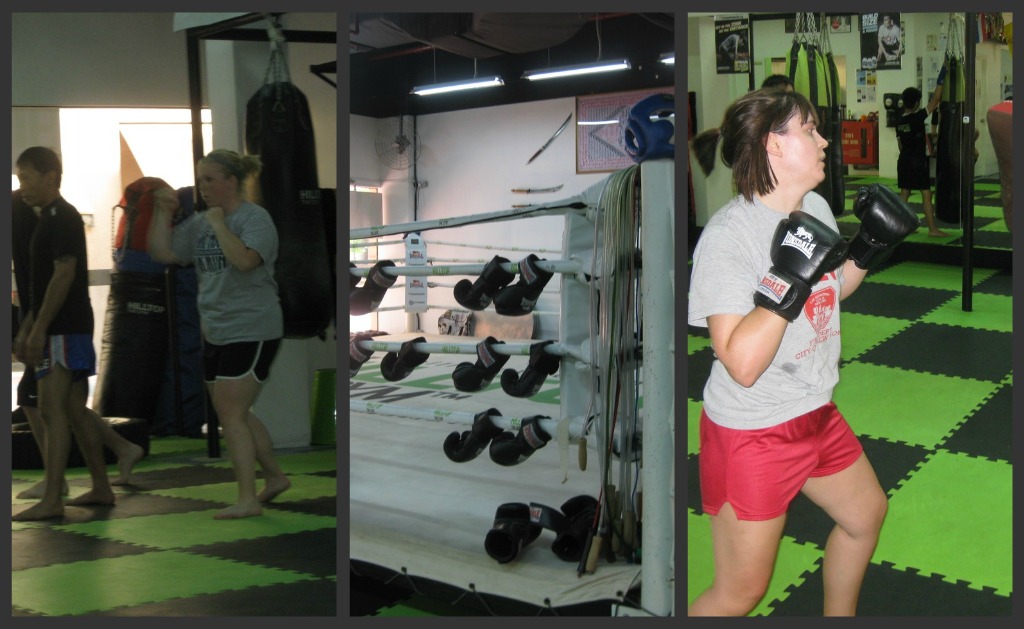 We took the bus home and made turkey, avocado, cheese, and fried egg sandwiches before heading down to Lena’s GORGEOUS pool. The water was cold, but I got in and then proceeded to nap poolside. So relaxing 😀 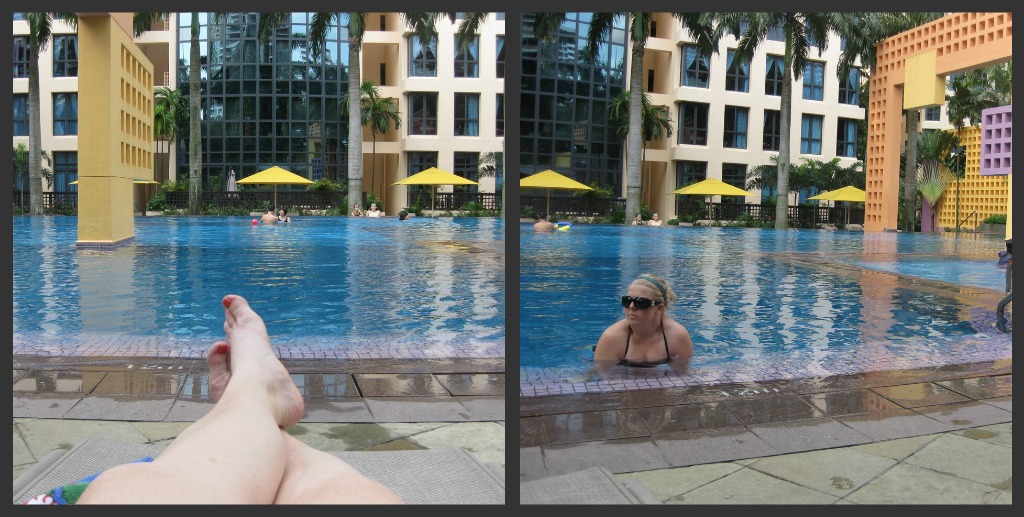 We then napped back upstairs before getting ready for a Chinese dim sum meal where we had pork dumplings, spicy chili crab dumplings, a pork and shrimp wonton soup, shrimp dumplings, and a pork dumpling in a vinegar sauce. Delicious! 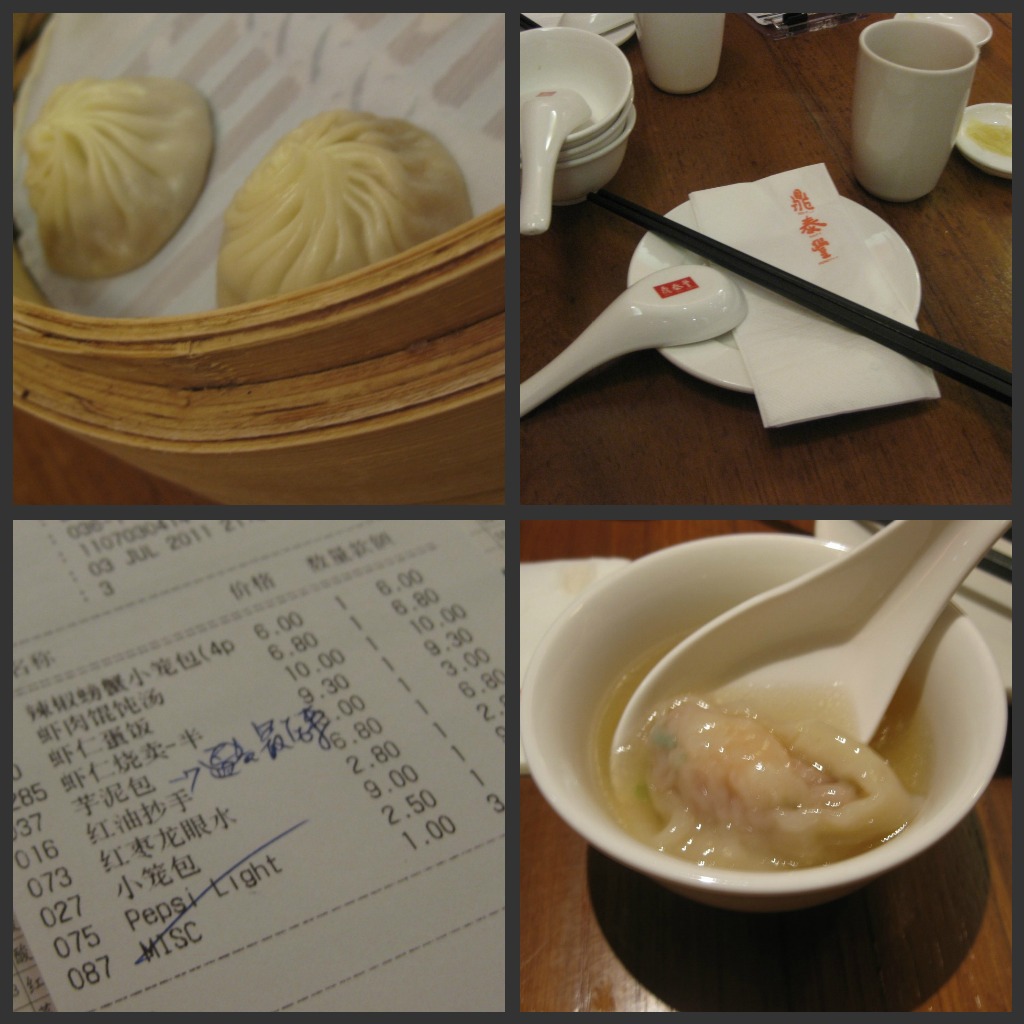 From dinner we went to the Long Bar in the Raffles Hotel for a $26 Singapore Sling – delicious! After our Singaporean drink, we walked along the bay to the Marina Bay Sans where there is lots of retail and a casino. We strolled through the casino watching people bet lots and lots of money, and Lena and Mark each played a few slots with no winnings to show for. 😉 We came back late and watched a movie. 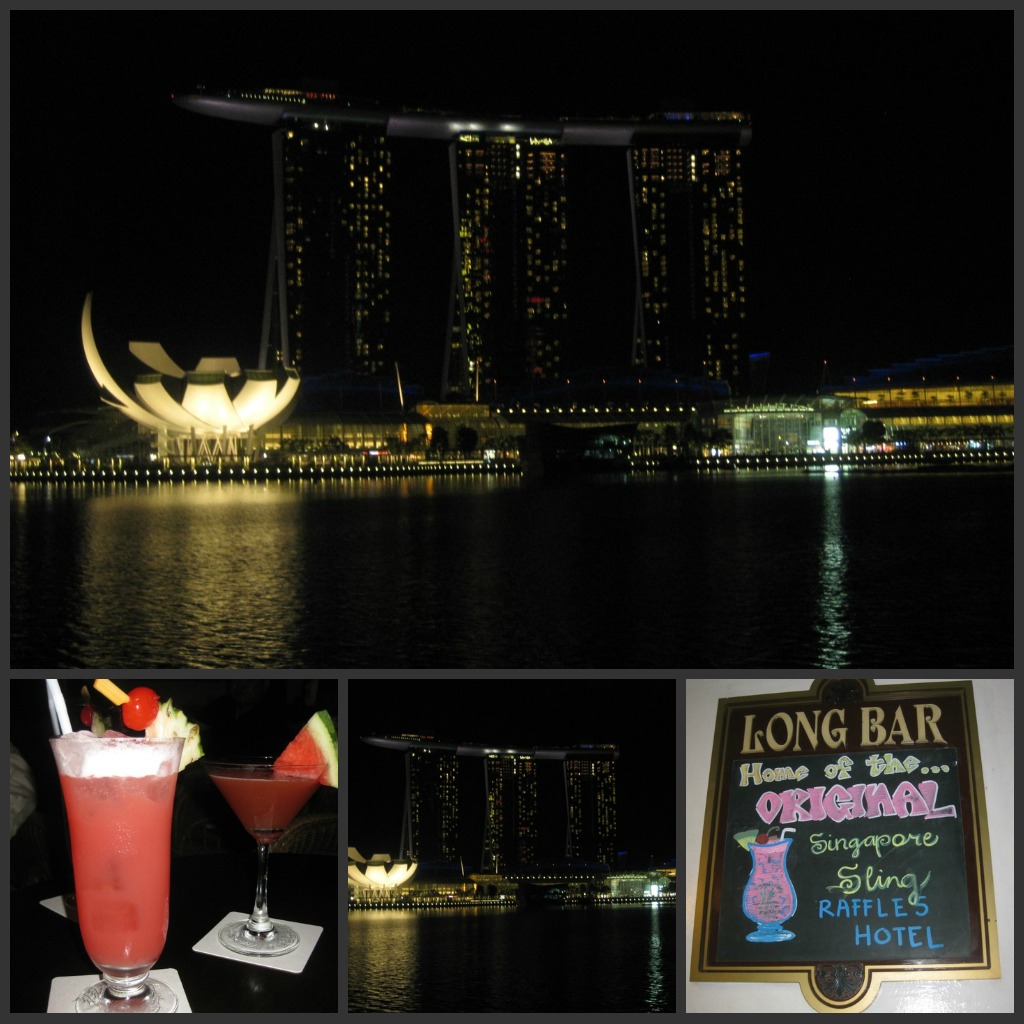 Day 5: Mr. P and I visited the pool again before we headed off to a famous Hawker (open-air food court) for lunch, which consisted of some type of noodle dish and a carrot cake (which appeared to be something like a vegetable pancake that had been pan fried). We walked around, winding our way through Chinatown again, and to another new indoor mall near the bay. We had drinks and apple strudel on the bay (gorgeous weather!) before heading back to pack and depart for Thailand. The traffic getting to the airport was worrisome, but we made our flight, and once again, I slept the duration. 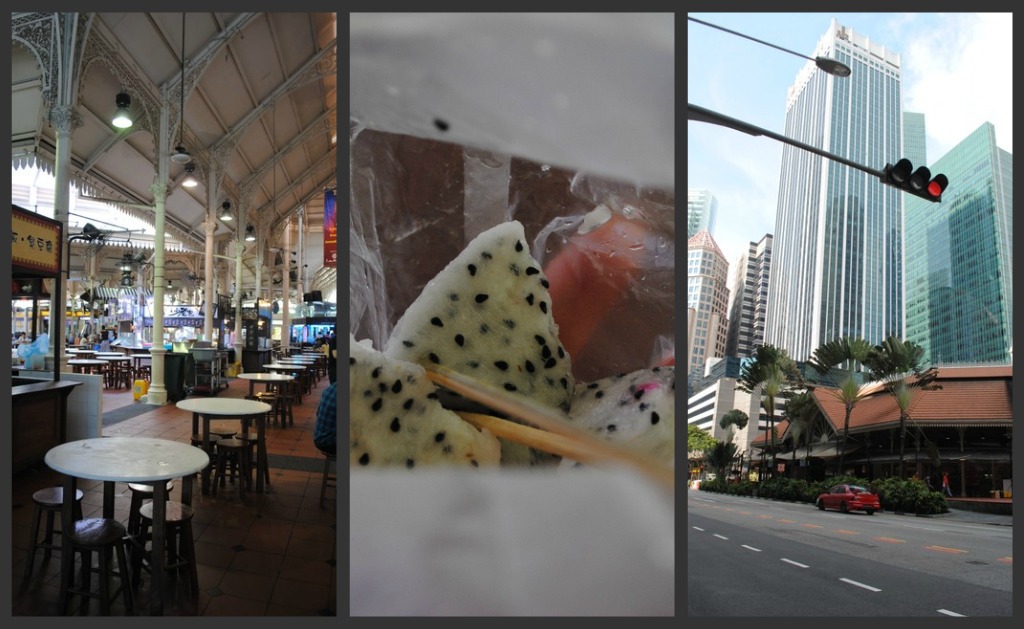 When we arrived at what I believe to be the most darling airport (think customs in a tiki hut), a shuttle picked us up to go to the hotel where we quickly found the beach bar and party. We settled in for a few hours of dinner and drinks before calling it a night. Thailand is beautiful!