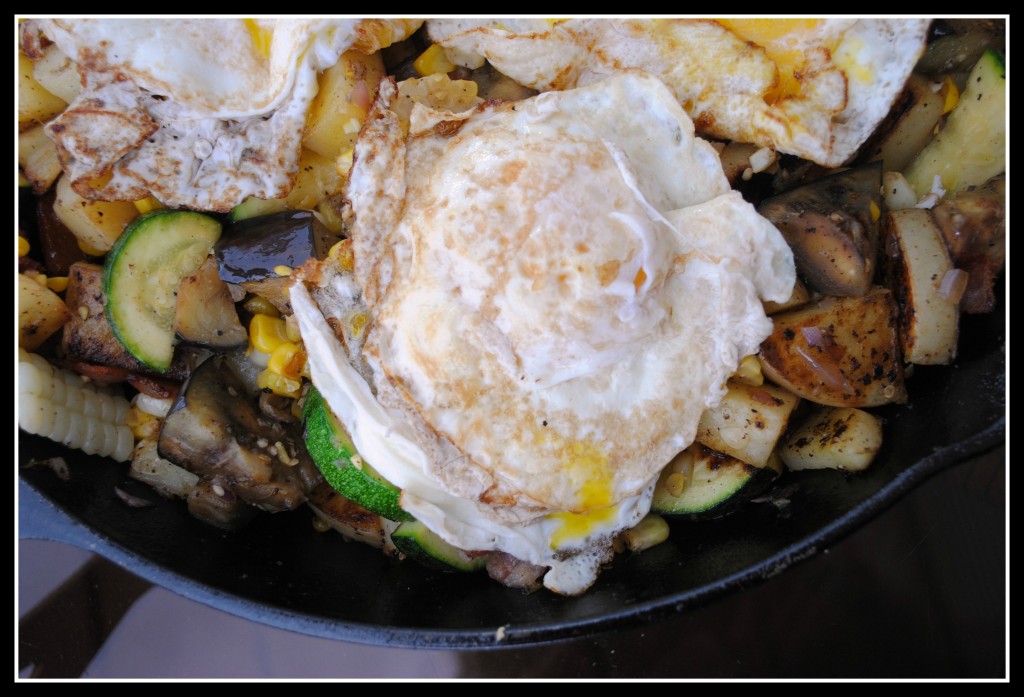 I’m very familiar with the word hash when used as a verb. But as a noun, I wasn’t so sure.

hash [hash]; noun
1. a dish of diced or chopped meat and often vegetables, as of leftover corned beef or veal and potatoes, sauteed in a frying pan or of meat, potatoes, and carrots cooked together in gravy.
2. a mess, jumble, or muddle
3. a reworking of old and familiar material

This meal contains meat (bacon!), but it doesn’t have to. It certainly contains vegetables in the way of all things in-season: zucchini, corn, bell pepper, onion, eggplant…and potatoes. But I think potatoes are nearly always in season (they’re troopers through the cold weather). 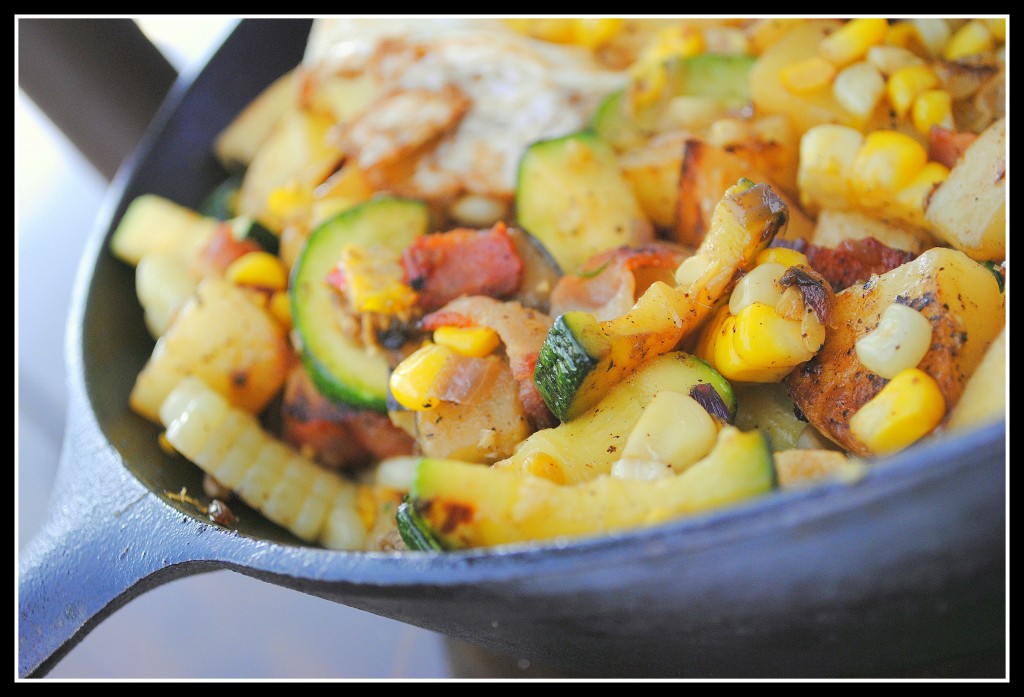 Anyways, this summer hash is certainly a jumble of ingredients, and you can feel free to use just about anything and everything. I could even see this dish being turned into a fall hash with sweet potato, root vegetables, and may even…pumpkin!

Plus, this meal doesn’t have to be a breakfast dish. I served it as dinner and ate it for lunch throughout the week. It’s hearty, filling, stick-to-your-ribs food that is good any time of day. 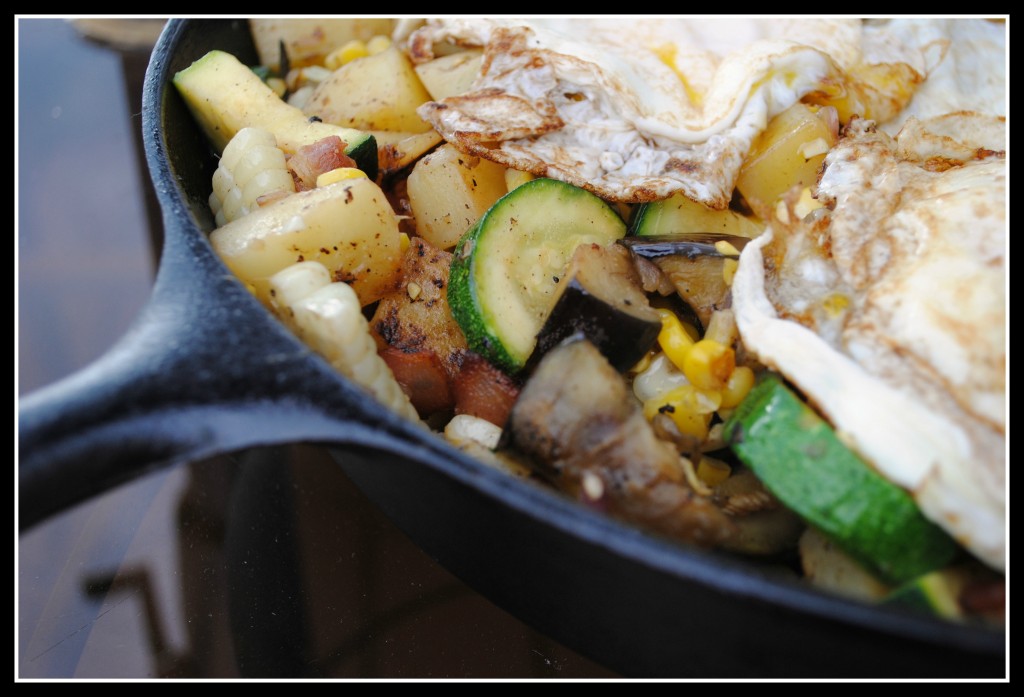 Grilled Corn Summer Breakfast Hash adapted from How Sweet It Is

Heat a large skillet or 10 to 12-inch cast iron skillet over medium heat. Once hot, add chopped bacon and cook until crispy and fat is rendered Ã¢â‚¬â€œ about 4-5 minutes. Remove bacon with a slotted spoon and drain on a paper towel.

Add potatoes with a sprinkle of salt and pepper to the bacon fat and cook for 8-10 minutes, stirring and tossing every few minutes.

Add all the remaining ingredients and cook 5-10 additional minutes or until cooked to desired doneness. While vegetables cook, heat another skillet on medium high and cook your eggs as desired, then set aside over low heat. Yield: 4 servings (~1 1/2 cups veggies with one egg)

Result: Lots of summer’s best produce, with classic potatoes, topped with an egg to complete a meal…what’s not to love? With all the low-calorie, nutrient and fiber-packed vegetables this meal is health-conscious and very, very filling. There’s a great balance of complex carbohydrate, protein, and fat. It reheated really well for lunch throughout the week, too. Note: If you would like to make this a vegetarian meal, swap out the bacon for about 3 tablespoons of olive oil! Enjoy!

Money Matters: The red bell pepper ($1) and nitrate-free bacon ($0.38/slice) were the most expensive ingredients. The eggplant ($1.99/lb normally, though mine was “free” from the garden) came in at $0.75 as one of the more expensive ingredients, as well. Zucchinis are cheap at about $0.50 a piece. For organic potatoes, I paid $4.50/5 lbs, bringing the cost of the potatoes to $1.35 for 4 potatoes. The cheap protein source, eggs, is what really helps to keep the cost of this meal to a mere $6.77 total and the cost per serving at $1.69!

Last week’s menu was all about corn after I got 13 ears from the farmer’s market. This week, the theme is eggplant. This time of year, eggplant is everywhere and it’s at its best! Plus, my garden has several ready to harvest 😉

Tonight is the championship game for my hockey team! I am hoping celebratory beers with the guys afterwards will be in order. Better stretch out my legs from yesterday’s grueling 5 mile run/walk. It’s a shame when one of the prettiest days of summer comes with one of the toughest runs in a while!

Question: Have you ever made a hash at home?

P.S. Check out my guest post over at Pursuing Balance on Dietary Compliance!