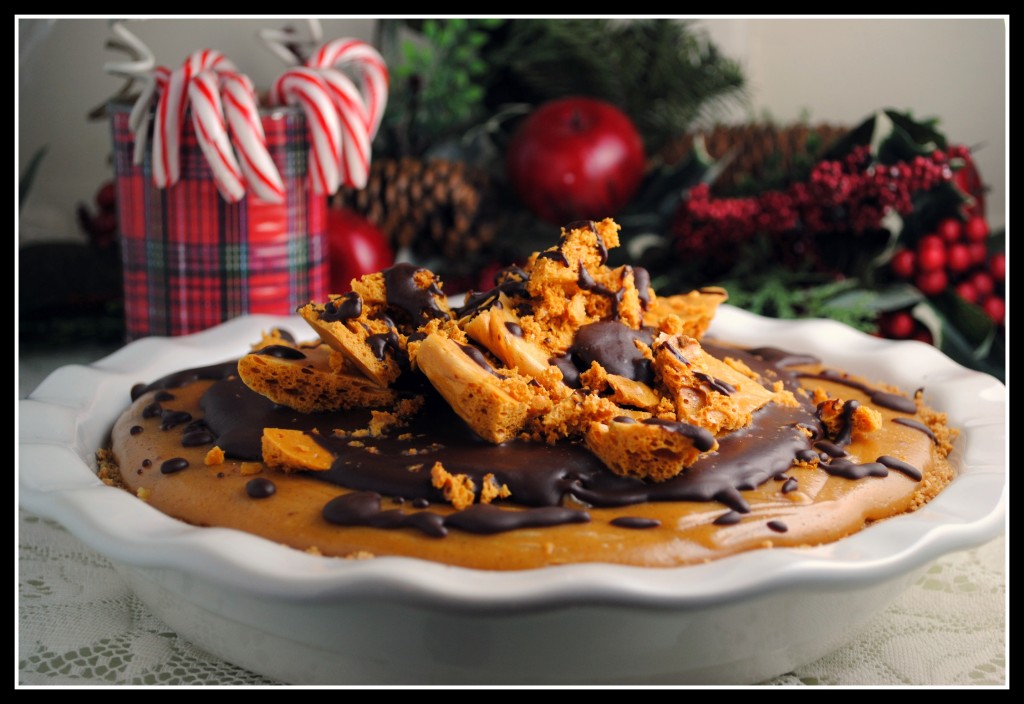 Almost as insane as this pie. No, really. It is knock-your-socks-off good. If you plan to make this, make it for a crowd — as much as you won’t want to share, you really, really ought to. The only safe way to make this is knowing there will be none leftover. 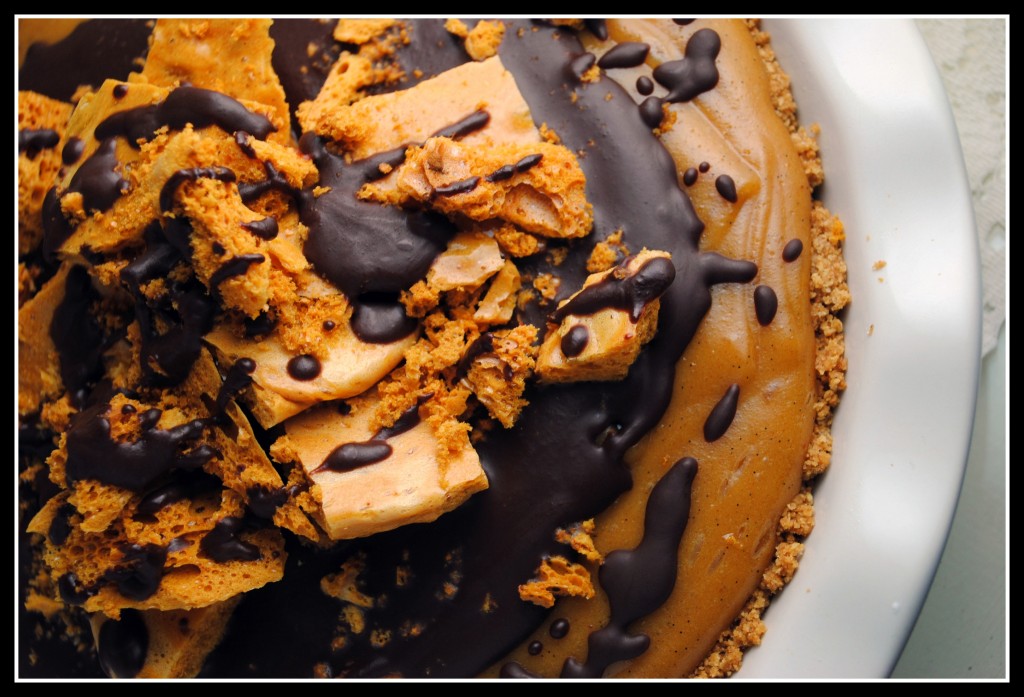 I’m skipping ahead with this recipe to the dessert portion of my Mingle with Melt dinner party. Yesterday and today were back-to-back wow-factor recipes from the event. I sure know how to pick recipes 😉

If you’re catching up with the series that was this meal, thus far I’ve posted the Cream Cheese Penguins, Blue Cheese with Endive Scoops, Cheese-Stuffed Dates with Prosciutto, and Peppermint Oreo Truffles. So this was dessert #2, featuring Melt. TWENTY tablespoons of Melt, in fact. (If that’s not testament enough that this stuff can be used as a healthy substitute for butter, I don’t know what is!) 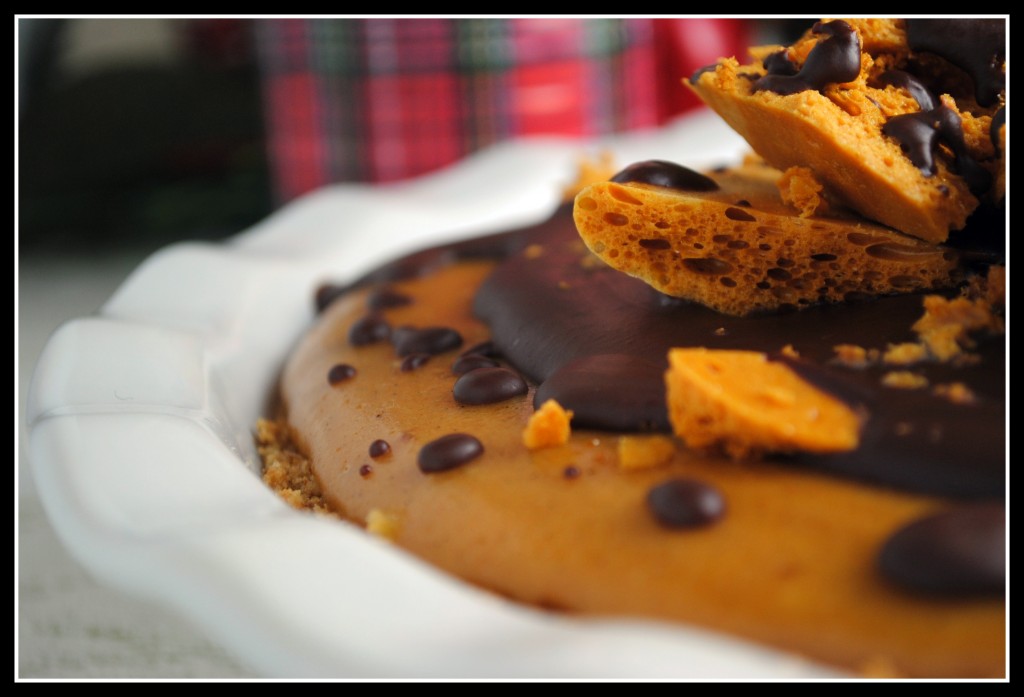 If you’re thinking, “Where’s the entree in that meal, dummy?”, you obviously either 1) don’t appreciate my attempt at photographing the best pie (ever?), and/or 2) don’t like peanut butter (for realz?).

This pie was epic (and I don’t use that word lightly!). I literally skipped over the risotto entree (with LOBSTER!) to post this pie. The second I saw it on Joanne’s blog, it was bookmarked.

My mom and I making this pie, particularly the honeycomb, was also epic…almost an epic fail. My mother was certain I was about to either give myself third degree burns, and/or ruin her kitchen floor. When the recipe says that the baking soda will cause the honeycomb to foam up…that is no joke. Use a big pot…the biggest one you’ve got.

And let’s do everyone a favor and just pretend there’s no nutrition information below for this recipe. No, really. Don’t look. It’s a treat to be enjoyed on the very rare and special occasion. 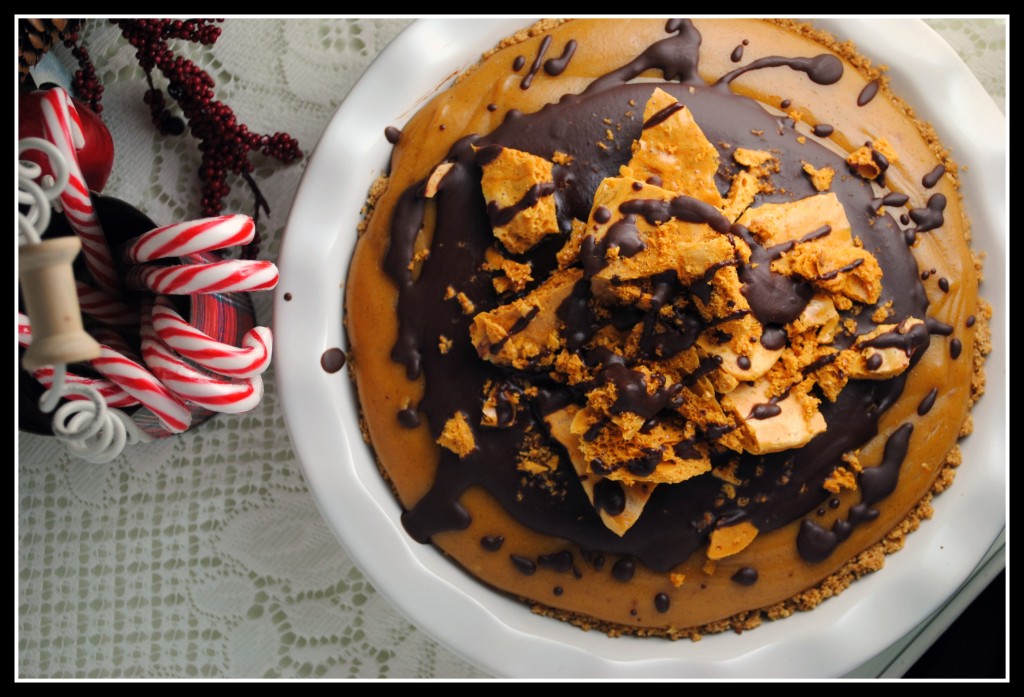 Finely grind graham crackers, brown sugar, salt, and nutmeg in a food processor. Transfer crumb mixture to a medium bowl. Add melted butter and stir to blend. Use bottom and sides of a measuring cup to pack crumbs onto bottom and up sides of 9″ glass or metal pie pan. Bake until golden brown, about 15 minutes. Let cool.

For the filling, mix yolks and 6 tablespoons sugar in the bowl of a stand mixer fitted with a whisk attachment. Beat at high speed until ribbons form, stopping once to scrape down sides of bowl, about 2 minutes.

Meanwhile, prepare the honeycomb. Line a baking sheet with parchment paper or foil. Combine sugar, corn syrup, honey, and 1/4 cup water in a heavy deep pot. Stir over medium-low heat until sugar dissolves. Increase heat to high. Bring to a boil. Cook without stirring, occasionally swirling pan and brushing down sides with a wet pastry brush, until sugar turns pale amber. Working quickly, add baking soda (mixture will foam up dramatically). Whisk quickly just to combine. Immediately pour candy over prepared sheet (do not spread out). Let stand undisturbed until cool, about 20 minutes. Hit candy in several places with the handle of a knife to crack it.

Stir chocolate and remaining 2 tablespoons butter in a medium bowl set over a saucepan of simmering water until melted and smooth. Drizzle some of the chocolate glaze over the peanut butter filling, making a circle in the middle of the pie and leaving a 1-2 inch plain border. Pile pieces of honeycomb on top. Drizzle remaining chocolate glaze over. Yield: one 9-inch pie, serves 12.

Result: This pie was the highlight of the meal. The Melt worked beautifully in place of butter which not only dropped the calories per slice by 33 calories, but was 3.7 grams lower in fat and the fat that remained was far less saturated and included heart-healthy mono and polyunsaturated fatty acids. I figure, if I’m going to splurge THIS much on dessert, there has to be an upside! But really, everyone loved this pie and a small piece is all you need. I think this could even be stretched to 14 or even 16 slices if you can get them to cut that thin 😉 Enjoy!

There is Illini basketball and football on today — a big day for the die-hard University of Illinois fans out there! As for NYE plans, I have none and I’m also pretty excited about that. I’m such an old lady at heart!

P.S. Thanks for all the congrats on my new job! I really appreciate it!

Wishing you and yours a happy and healthy 2012!