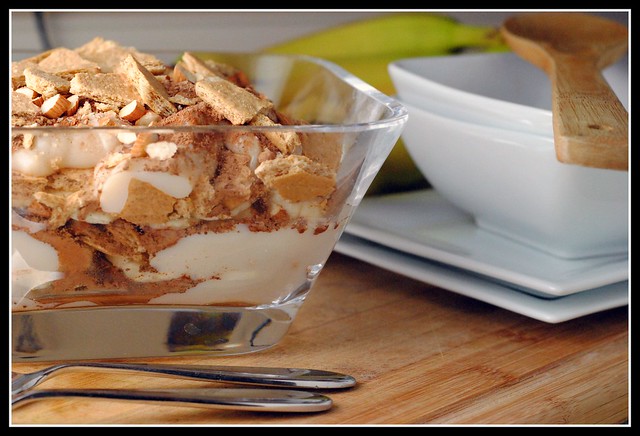 Pudding is something I’ve always wanted to make. When this month’s Food Network Magazine had this recipe that called for unsweetened almond milk, I knew I had to try it. Almond milk has a rich, unique flavor that I love to use in place of cow’s milk, especially in desserts. I also love that it’s shelf-stable so I usually keep a carton on hand so that when I’m in a pinch, I’m never without “milk”.

This isn’t the lowest calorie dessert ever (I was actually surprised to see it wasn’t below 200 calories/serving), however, it contains fruit, low-fat milk, unsweetened cocoa powder, and almonds which are all healthful ingredients…and very little sugar. 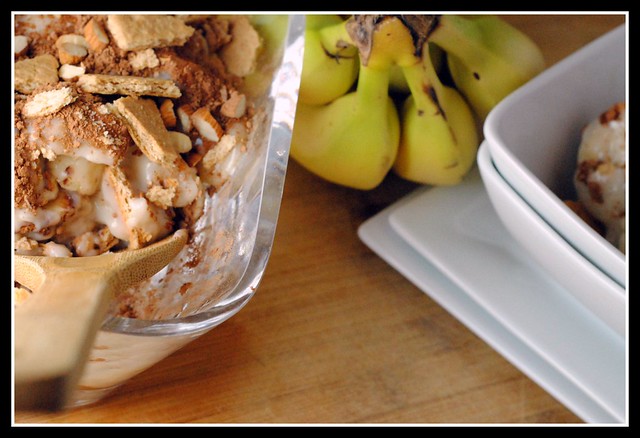 This pudding recipe alone was delicious and simple to make. While the pudding does take some time to chill, the actual pudding-making process takes less than 10 minutes.

With the sweet, fruity bananas and the cold pudding, this dessert would seem more appropriate for summertime. But hey, since bananas are widely available year-round, it’s fun to enjoy any time of year…especially during the winter’s first big snow! 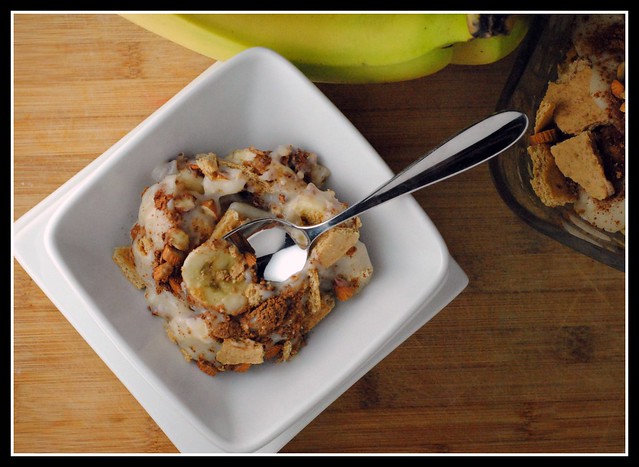 Heat the milk and almond milk in a saucepan over medium heat until almost simmering; remove from the heat.

Meanwhile, whisk the cornstarch, salt, sugar and egg in a medium heatproof bowl.

Pour about half of the hot milk mixture into the bowl and whisk vigorously until smooth. Pour the mixture back into the saucepan and cook over medium heat, whisking vigorously, until thick and starting to bubble, 3 to 5 minutes. Whisk in the vanilla. Transfer the mixture to a bowl and let cool, stirring occasionally. Cut the bananas into thin slices.

Layer a few banana slices, a few pieces of graham cracker and 2/3 cup of the prepared pudding in a serving bowl; sprinkle with 1 teaspoon cocoa powder and 1 heaping tablespoon almonds, then repeat to make 2 more layers. Cover with plastic wrap and chill 4 hours or overnight. Keep refrigerated up to 3 days. Yield: 6 servings (about 3/4 cup each).

Result: Simple and refreshing flavors. This pudding is simple to make and assemble. I was tempted to omit the almonds to lower the calorie content, but they add too nice of a crunch! To lower the calories and stretch the dessert, you could add an additional banana or 2! Enjoy!

*yawn* Mr. Prevention and I were out til after MIDNIGHT last night (that’s a rarity!). We went out to a late, long sushi dinner and then out for a drink downtown. ‘Twas fun! Tonight my hockey game doesn’t start until 10:40pm (!). I’m so glad I have tomorrow off!