The race was called Blizzard Busters and it was on February 4th in northern Ohio. That should have been clues #1, 2, and 3 that I was in for an experience.

The weather near to Columbus wasn’t bad yesterday morning – high 30’s and no snow. As I began the 90 minute commute up towards Cleveland the weather turned grim. Lots of blowing, heavy snow. Only one lane of the interstate was drivable and there I was, behind a truck going 40 mph. Safety first.

They pushed the race start time back by 15 minutes for those battling the weather to get there. I got my bib number and off we went…snow, slush, and cold!

Here’s a photo of the weather: 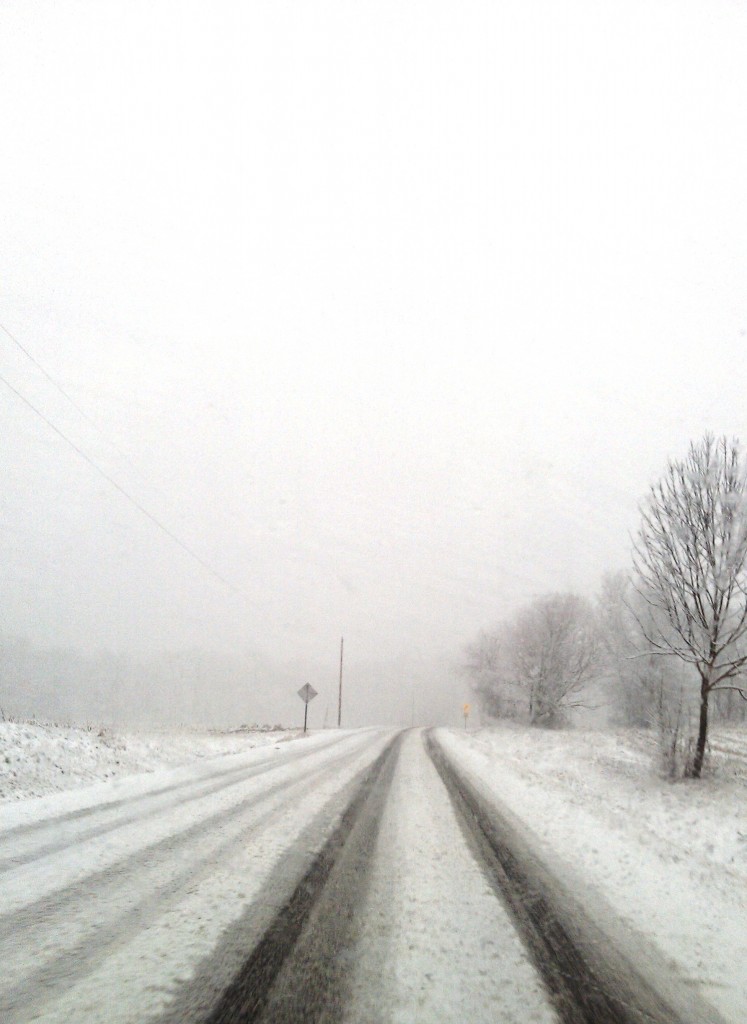 The first 3/4th of a mile were in the street and my pace was probably too conservative…perhaps I was adjusting to the giant snow flakes going straight into my eyes! I looked down once at my Garmin and I was running 13 min/mile. I picked it up and continued (I blame sluggish starts on a lack of warming up, usually. For me, the first mile is historically the slowest). There was melted snow, but nothing major…other than 2 HUGE hills. I was feeling good.

Then we got to some less traveled streets where there was most certainly slush-covered, but it didn’t slow me down too much because it was flat. Then, we entered a cemetery (still unsure how I feel about this…) by way of a large, slushy hill – my feet would be running and without the traction, it was like running in place at times. That hill was brutal. By the time I got to the top and about 1 1/2 miles in, I was pooped.

The cemetery is where my pace dropped. The slush was slippery and this portion of the race was an out-and-back so the faster folks were flying by on my left. I got through the cemetery and then had to run down that steep, slushy hill that got us into the cemetery. Based on the footprints in the slush, some individuals had skied down that portion. I slowed down a bit as falling did not look like a better option. Once out of the cemetery, there was about 0.4 miles to go.

Despite some small hills, the last 0.4 felt good. My pace was closer to 8:40ish, but I had lost a lot of time in the cemetery slush. I finished in 31:56 which was 4th in my age group of 26-29. We don’t need to make too much mention of the fact that I am 26 and I didn’t bother to look at how few women were in my age group 😉 Let’s just say it was a very small race.

My business partner, Donna, finished in 31:28 and got first for her age group! She is in great shape. We also ran with Layla (hi, Layla!) and her hubby who both did great. It was Layla’s husband’s first race and he and I ran together much of the time. He kicked it into HIGH gear at the end and had a great finishing time.

Per Layla’s suggestion, I think we’re going to do another 5K in March around St. Patty’s Day. Hopefully the weather will cooperate and I can get that sub-30 finish!

Donna and I retreated back to her beautiful home to change into cuddly, warm sweats and enjoyed a celebratory beer at 10am. It was her suggestion, but we earned it! 😉

As much as I previously didn’t enjoy the 5K distance and preferred 10K-15K races, the 5K is much more suitable to my current running regimen and I think it’s a distance I will work to improve. This is officially a goal of mine for this year: run more 5K’s and work on improving my speed.

I can tell today that those hills and the snow were a challenge – I’m not usually sore after running a 5K.

Off to grocery shop, do some stuff in the kitchen, and get ready for the week. I have a hockey game during the Super Bowl, so no plans here. So lame, I know.

Enjoy the game for those watching!