Yesterday at around noon-ish (I think it was noon-ish…this whole spring forward business has me feeling all sorts of off), my kitchen was bustling with pepper preparations.

I had purchased all of the ingredients for these peppers about a week ago, and the peppers were showing signs of aging. It was time to make stuffed pepper magic.

And Mr. Prevention, as described on Facebook, F-bomed his way through making faux fried japalenos (adapted from my Oven-Fried Pickles recipe)…and nearly burned the house down.

Naturally, he was overly proud of his “accomplishment” and proceeded to leave the kitchen in complete disarray. Naturally. Since Mr. Prevention doesn’t read my blog (lame!), I can safely say without repercussion that my peppers out-did his peppers…big time. He will also never know that I shared his F-bombing and hazardous actions in the kitchen. Though, he did give permission for me to blog about his endeavors, photos included. How thoughtful of him.

I hear about stuffed peppers a lot as a dietitian because they’re what I would refer to as a “mixed food”. When I’m discussing dietary intake with patients, I have to ask them to elaborate as to what is contained in their stuffed peppers because the recipe varies a lot from one kitchen and family to the next. Most “American” stuffed peppers include rice, tomatoes and/or tomato sauce or paste, ground beef, and cheese.

And now I’ll be honest. Nothing about that combination sounds appealing to me. At all, whatsoever. But with a Mexican twist of rice, black beans, spices, corn, and cheese. NOW we’re talking. This combination suits my love affair with all things Mexican juuuussst fine.

By omitting meat and adding beans, you are cutting calories and fat and adding fiber, vitamins, and minerals…all while keeping these peppers with plenty of protein to tide over the meat-lovers in your life and to provide some serious staying power.

Only with 9 grams of fiber can 228 measly calories be substantial enough to be called a meal.

A thing of beauty: delicious, nutritious, quick, AND cheap. This is soooo my kind of recipe. Turn on broiler to 550 F. Place halved and cleaned bell peppers on a baking sheet lined with foil or parchment, face down. Broil for 4-6 minutes, until blackened. Place in airtight container or ziplock bag and let sit for 10 minutes. When cool enough to handle, peel off skin.

Heat olive oil in large skillet over medium-high heat. Add onion and cook until tender, about 3 minutes. Add garlic and cook 30 seconds. Stir in beans and reduce heat to low. Stir in cooked rice, corn, and all seasonings and lime juice, if using. Warm through 1-2 minutes.

Return pepper halves to the lined baking sheet. Stuff each pepper half with rice and bean mixture. Top with cheese and bake about 12-15 minutes. Garnish with cilantro. Top with a dollop of plain Greek yogurt, if desired. Serve immediately.

Result: Great Mexican flavors in this vegetarian fare! I’ve made stuffed peppers once before — a very similar recipe, actually. The only major difference was poblano peppers vs. bell peppers. The bell peppers are larger, generally speaking, so you can pack more stuffing in. The bell peppers are sweet without any heat, so for those no wanting any real heat, this is a better choice. I pumped up the heat with the cayenne – that stuff is potent so taste as you go…a little bit goes a long way. The cumin and lime juice work well together to create a very fresh, smokey-citrus blend. Quick to make…and cheap! Enjoy!

Hi-ho, hi-ho…off to another work week we go. Have a great week! 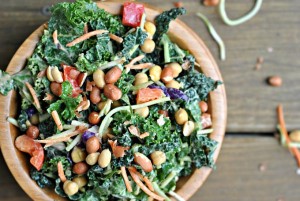 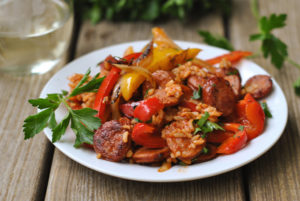