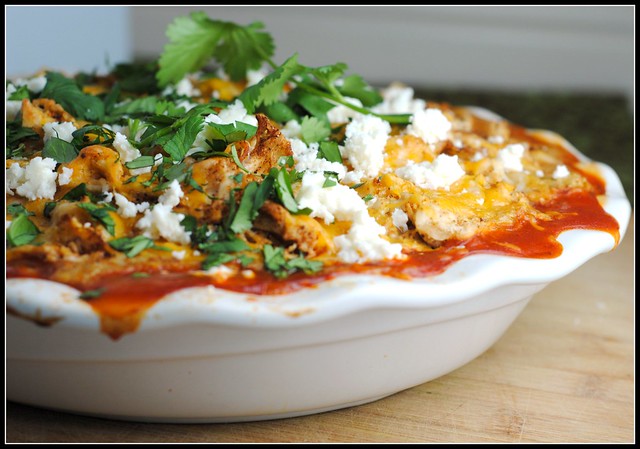 We have an elliptical fix-it man ghost.

Our elliptical has been making this weird clicking noise for the past month or so. My mom even noticed it this weekend when we were working out. Mr. P kept calling for someone to come out and take a look at it and yesterday was finally that day. We were sure to be home for our 5pm or after appointment and good thing because the elliptical repair man showed up right at 5.

Mr. P retreated to the basement with him to show him the problem and wouldn’t you know…the elliptical up and decided to work just fine. Mr. Prevention came up from the basement and was ticked to say the least. The man probably thought we were crazy, but I guess we have an elliptical fix-it man ghost! 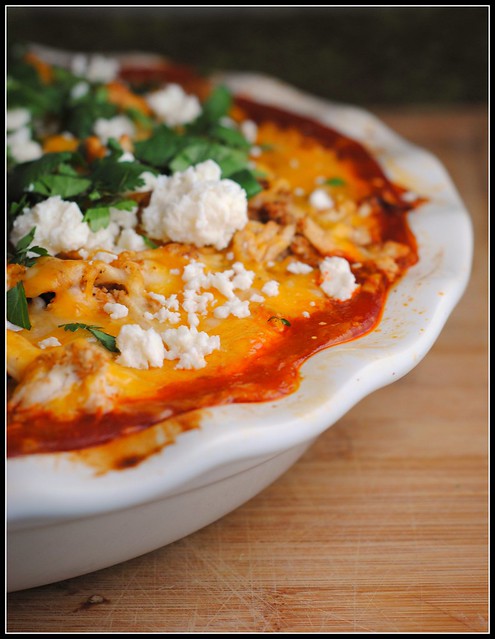 On a completely unrelated note, this Chicken Tamale Pie was delicious! My coworkers, as always, think I eat really “weird” food. And I am that coworker that stinks up the break room with wafting scents of brussels sprouts and seafood…get over it, people! I’m not going to plan my lunch around your smell preferences!

But these leftovers at lunch created quite the commotion in response to its smells. In a good way.

As attractive as this pie is as a whole, it wasn’t exactly tidy to remove from the pan and ended up in one messy heap on my plate. Hence, these photos are lacking and few in number. But hey, image isn’t everything…especially with food.

I am natural drawn to recipes that have a Mexican twist and if I’m being honest, I love creamed corn. I know, I know…but it’s so good 🙂 Everything in moderation! This recipe doesn’t epitomize health, but it isn’t lacking either. It’s pretty middle-of-the-road but packs lots of flavor. This is sure to be a hit with husbands and kids alike…even if served in an unattractive heap! Just ask my coworkers! They all but begged me to share 🙂 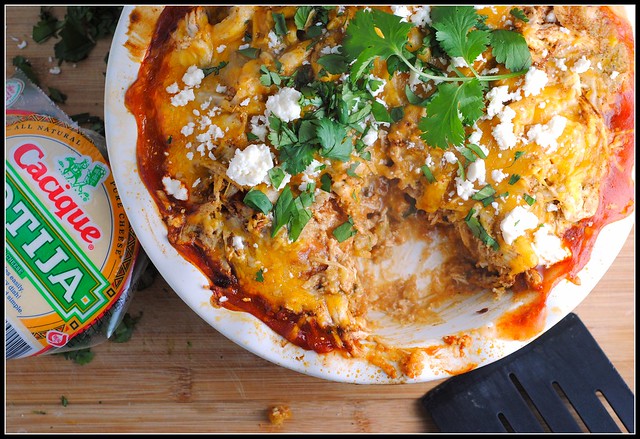 Chicken Tamale Pie adapted from Cooking Light, as seen on Pinch of Yum

Combine milk through green chiles, using just 1/2 tablespoon of the taco seasoning, in a large bowl, stirring just until moist. Pour mixture into pie plate. Bake for 20-30 minutes or until nearly set and golden brown.

While baking, toss the chicken in the remaining 1 tablespoon taco seasoning.

Pierce entire surface of the cornbread crust liberally with a fork. Pour enchilada sauce over top. Top with chicken; sprinkle with cheese. Bake for 12-15 minutes. Remove from oven; let stand 5 minutes. Top with cilantro and Cojita.

Result: I had some trouble with this recipe. The suggested cook time for the “crust” was not nearly long enough. I ended up nearly doubling the first bake time (my changes are reflected above). You could certainly make this in a larger pan and reduce the baking time, however. I ended up using about 9 ounces of enchilada sauce…it started running over the edges. Oops. Despite the over-filled pie pan, this meal turned out great and was very, very flavorful. Certainly a crowd-pleaser! Enjoy!

Wednesday already! Yay! Seriously, this week is flying by and I love it! I am looking forward to a rest day – my run yesterday was terrrrrible. I had planned a 6-mile run and totally pooped out after 3.75. My body was telling me to stop…for well over a mile, so I did. And I’m glad. My plantar faciitis is rearing its ugly head this week. Note to self: don’t wear cute heels when you teach, Nicole!