I only have one brother. He’s 4 years younger than me and we’re quite opposite. We very much so fit into the “oldest” and “youngest” child stereotypes. I’m mature, conservative, organized, motivated, and a little unadventurous. I play it safe…I’m “boring”. My brother is very fly-by-the-seat-of-his-pants, takes risks, loves to have fun, lacks organization and motivation, and finds himself in pickles rather often.

Because we were 4 years apart, he was entering high school as I was starting college and as he was starting college, I was starting grad school. Today, I’m married and settled away from home, and he’s finishing school, living with 2 guys in a Chicago apartment. He’s living the single life and working while finishing up school. We’re probably closer now than we’ve ever been, and I love that. But…we’re still VERY different. Since moving to Michigan, he has planned about 6 different weekend trips to see us and go to the beach. Six times, he has canceled. When he said he was coming this weekend, I didn’t give it any thought as history would predict a no-show.

Low and behold, the next thing I know…”the crew” is coming. Whoa. Did I sign up for this?

I talked to my mom last night and she informed me that they were coming, rain or shine. I had no idea who “they” included. When she started listing off names of possibilities, it was clear I was going to have a house full of near-strangers on my hands.

I got up today and worked out. I was just getting out of the shower when Mr. Prevention yelled up, “They’re here!”

I came down to seven twenty-somethings…and my brother grinning ear-to-ear with a “surprise!” smirk smeared across his face. At least my mom had warned me. My brother forgot his swim trunks. Someone else brought a dog. One guy didn’t swim in lakes or oceans. And the next thing I know they were off buying beer. Okkkay.

Upon their return, I suggested the public beach with volleyball courts, bathrooms, and food. But they wanted the private beach where drinking was allowed. Naturally. I showed them the beach and later joined them. Rain was predicted, but it ended up be a great beach day. Brother got too much sun and before long, they were back in the house eating the freshly baked cake and cookies I had made.

(I must admit – I seized the opportunity to bake for others who would enjoy and devour the sweets…a much safer route for the metabolically challenged.) Coat a shallow baking dish with cooking spray, and alternately layer sliced zucchini, corn kernels, and sliced tomatoes repeating layers until ingredients are gone, seasoning each layer with salt and pepper. Combine panko and Parmesan, and sprinkle on top.

Bake, uncovered for 30 minutes or until top is golden brown. Cover with foil, and bake for 10 minutes more or until vegetables are tender. Serve immediately.

Result: This is very simple and a quick to throw together vegetable bake that will utilize summer’s final yield. You can “jazz” this up with garlic, onion, and seasonings to taste…even a little olive oil drizzle beneath the salt and pepper seasoning. For a low-calorie, nutritious veggie side, thumbs up!

I’m so glad I decided to take tomorrow off. I’m making some serious progress on my cookbook photo editing. It’s hard to believe, but I only have 26 recipes left to make and photograph! 😀 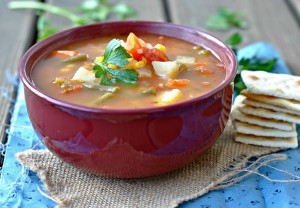 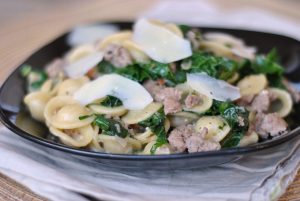