We just returned from Chicago and our baby shower for Baby Shea. My house is quickly turning into a sea or pink…and I love it 😀 I thought it’d be the perfect time to share her nursery with the www (for those who care…for those that don’t, we’ll be returning to food very shortly 😉 ). Maybe some of you are like me and just really like to see others’ homes. Regardless, here we go. 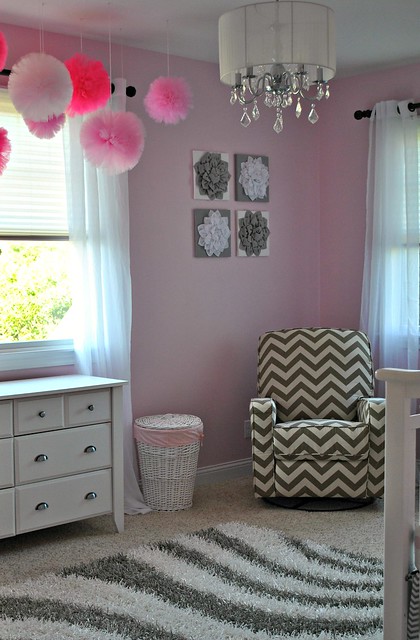 My idea of nesting turned into a bit of an obsession. I actually enjoyed researching furniture and more shockingly, putting it together. By myself. Sure, I’m pretty convinced this is the reason I ended up with tennis elbow (screwdrivers will mess up a forearm, who knew?)…but it was worth it. I am so proud of the room I’ve pieced together for Shea…and her arrival that is not so far off any more. (I admit, the third trimester is flying by despite the first 2 absolutely crawling).

Firstly, the paint color. I was pretty set on a gender-neutral yellow + grey color scheme, but despite the tomboy in me, pink is my favorite color…and my mom didn’t have to twist my arm much to get me to agree that pink + grey is just way too cute. So, pink and grey it is. I chose the color “Lighthearted Pink” from Sherwin Williams. It’s the perfect pop and very girly in the best of ways. My brother and dad came up to paint and while I originally wanted one of the walls to be striped, I also didn’t want the nursery to look like a Victoria’s Secret bedroom…so all 4 walls are pink. 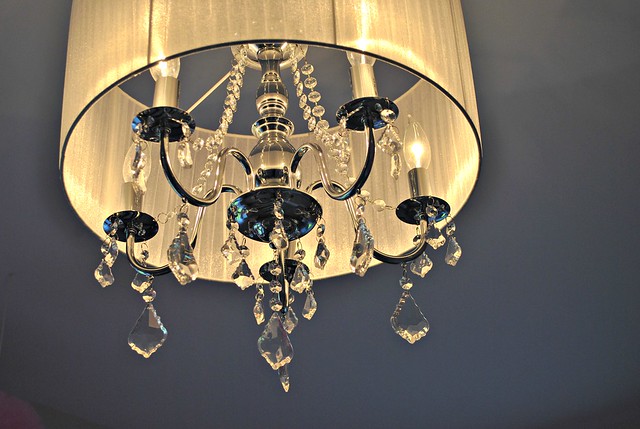 Next, I fell head over heels in love with the idea of a chandelier in the room. This wasn’t a hard decision to make as the lighting in the room was a simple globe with no real appeal, so buh-bye it went. I blame Pinterest for this one, but it is hands down my most favorite thing in the nursery. Wayfair had this cute chandelier that was easy to put together…just as soon as my dad and brother figured out the electrical side of things. 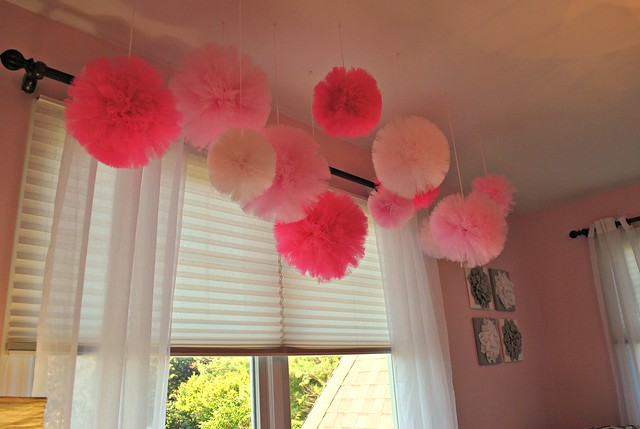 My other really girly addition to the room was these adorable pom poms off Etsy. The seller was great, they were easy to put up, and they’re darling. They really make the room. 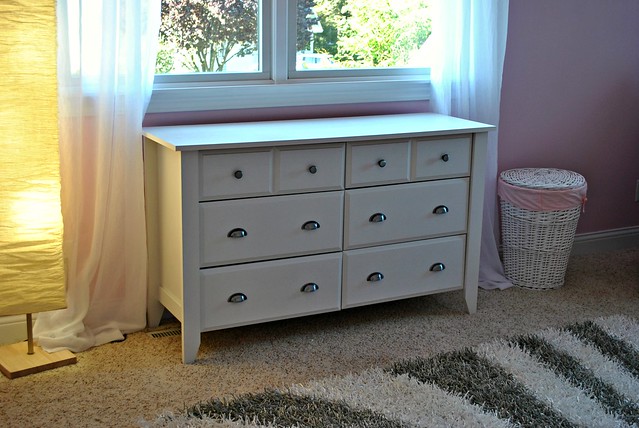 To match the white crib we had passed down from Mr. P’s cousin (awesome!), we purchased a white dresser that would double as a changing table. I wish we could’ve gotten something a bit taller, especially given the 12 inch height difference between Mr. P and I (and the fact that I will not be happy with lame excuses to get out of diaper changes)…but the window was prohibitive. I wish this dresser was a bit more substantial in its construction (due to the parts, not its actual construction, thankyouverymuch), but all-in-all, it’s a great value. I know that the furniture will take a beating in those first few years, and so replacing it down the road will be easier given that it’s not top of the line stuff. 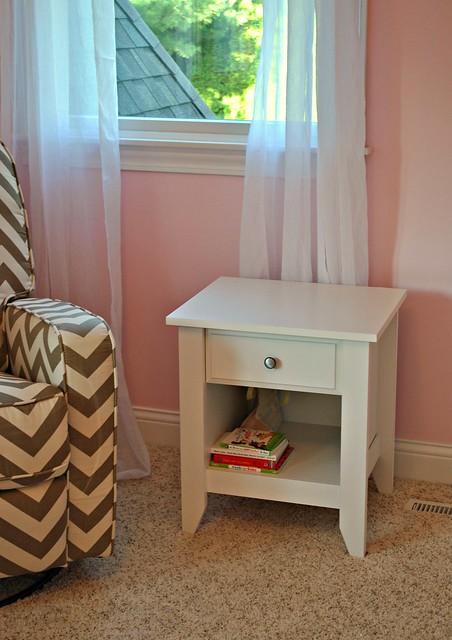 To match the dresser, I bought a white chairside/bedside table that I could have next to the rocker/recliner for all the items I’ll need within and arms reach. 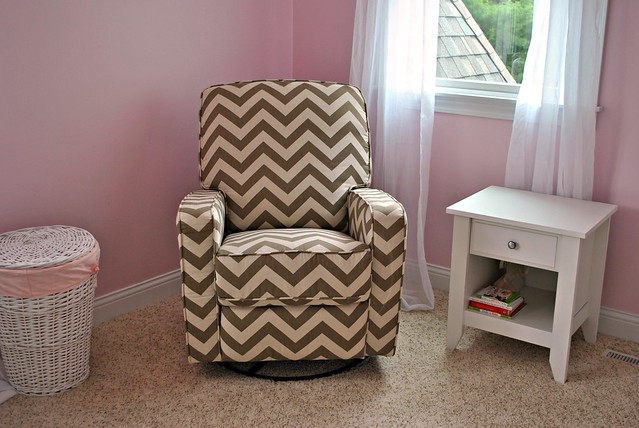 Speaking of this rocker/recliner, Pinterest is to blame for this one, too. I wasn’t obsessed with chevron print before putting together the nursery and now…I’m smitten with the pattern. I purchased this Swivel Glider in chevron print that appeared grey and white. In reality and had I read a bit more closely, the actual color is described as “taupe”. I’m not sure that taupe is the right description either, but it’s not grey…or taupe. It’s something in between. Other than my oversight, I can’t be disappointed with the purchase…the chair is chic and super comfy. I hope it’s just as comfy once I’m in it all night long 😉 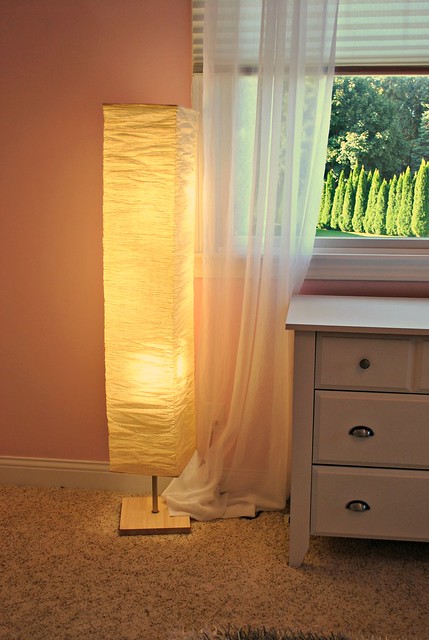 Because the chandelier gives off killer lighting compared to the boring globe light that was previously in the room, I wanted a light source that was a bit more soothing. I’ve always loved floor lamps and so I came across this fun floor lamp that can provide substantial light without being too much. Great purchase, couldn’t be happier. 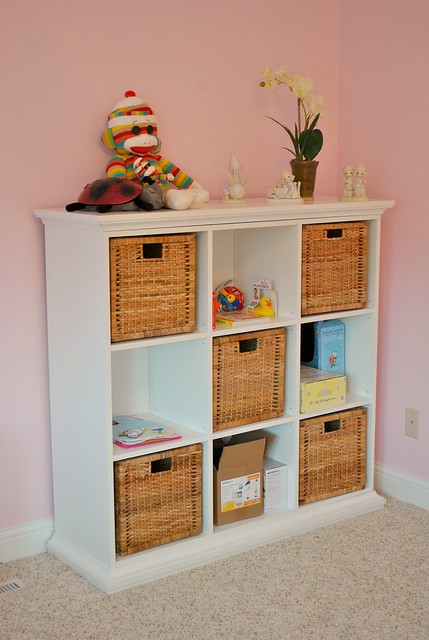 As Shea’s dresser/changing table already began to fill up with clothes and she had already acquired some books, I decided we needed a bookcase that could also be used as storage. I hunted alllllll around for some woven square baskets and the best price I could find was from Ikea. I hate that Ikea requires a signature for delivery and returns items after 3 failed delivery attempts, so I had them delivered to work and voila. They were simple to put together (no tools required!) and look great. 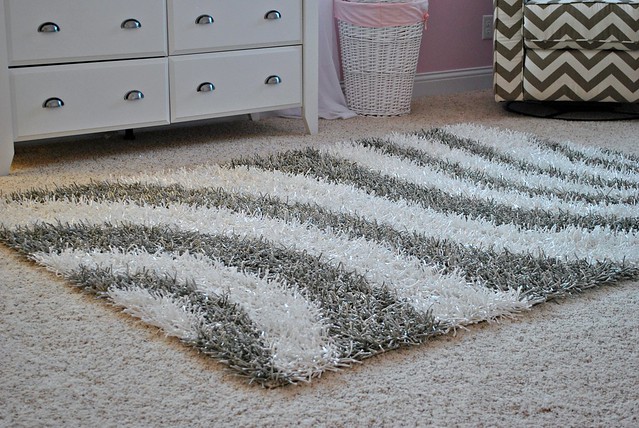 I was really leaning towards a grey and white chevron rug, but I decided to do something a little more…eccentric. The price was right on Overstock.com…so, I was sold on this swirl shag rug. This rug is really fun and it’s very soft. It’s also stain resistant which is wonderful. 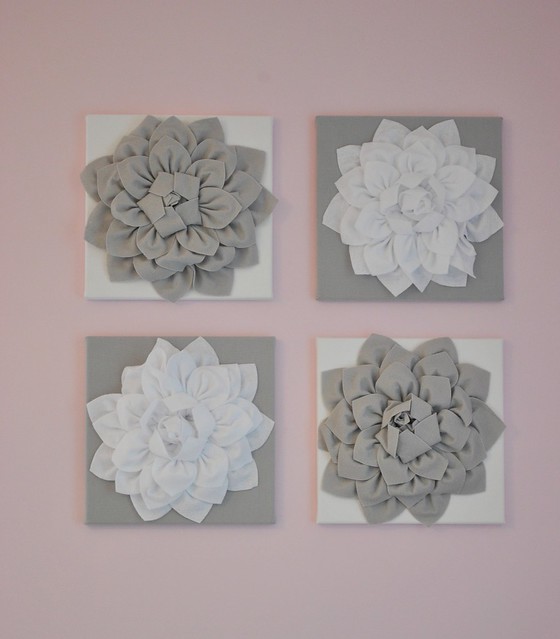 Another Etsy find was these felt flower wall canvases. I went back and forth between which ones to get (the seller has so many to choose from!), but I went with basic grey and white, hoping to tie in the taupe chair to look a little more grey than taupe. I’m not sure I accomplished that mission, but the look is darling 🙂 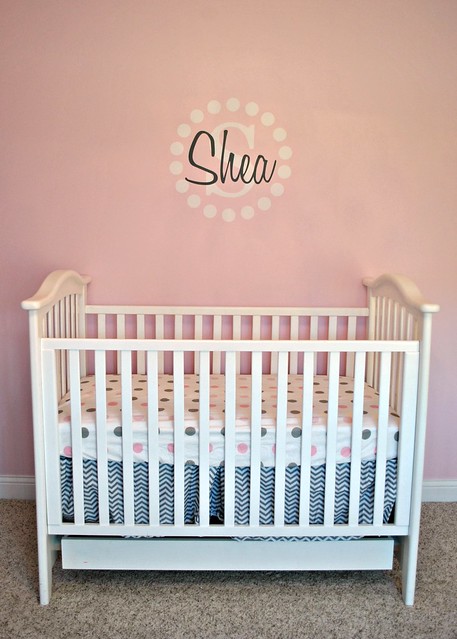 My final touch to the nursery was the “Shea” decal. I LOVE how it looks, but it was a nightmare to get onto the wall. There were some four-letter words involved and several near-tear moments. But, it was worth it, especially for $34!