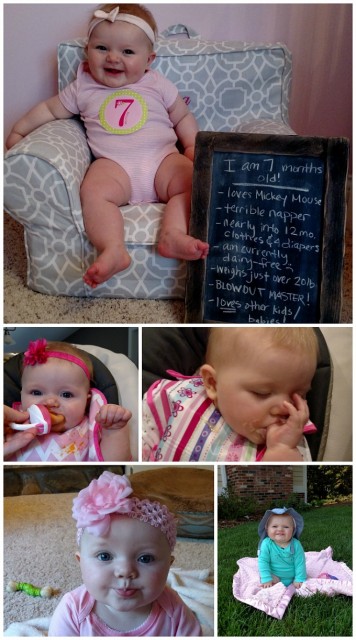 Oh, hi. Yes, I took a small blogging hiatus. I have some decent excuses, like visitors in the evenings, internet that has been a little finicky, hockey games (I scored 2 goals…that never happens!), and throwing out my back (what the hecccccccccccck?), but the truth is…the weather. Until today, Michigan has had a BEAUTIFUL week of weather and I’ve been enjoying every second. Shea is also a fan of the outdoors (and every opportunity to be naked and outside – should I be worried yet?).

My not-so-little Shea turned 7 months old this past week. I just can’t believe it. Time goes far too quickly. My little babe is currently cackling at me and loves to flirt with men (again, should I be worried?). She’s infatuated with the dog, Lily, and spends much of her time at home cackling at her, too. Sleep has been touch and go lately. On a good night, she’ll go down around 7PM and get up for a feeding sometime between 4 and 5AM and back down until close to 7am. The only thing that is consistent about this “routine” is the fact that she’s turning into a pumpkin come 6:30/7PM. It’s like clockwork. On a bad night, she’ll be up 3 times, generally starting at 1am and repeating at 3/4ish and 5ish AM.

On that same note, I believe her sleep to be very strongly correlated to her hunger strike. When we introduced solids (purees) at 5 months, she couldn’t get enough quickly enough. It was almost…worrisome. Should a baby eat that much? And now, meal times are my most dreaded time of day – even more so than the middle of the night wake-ups. Does that tell you something!? It’s as if the second I put Shea in her high chair, she’ll arch her back and fuss, refusing food of every kind. I’ve tried every puree known to man – homemade and store bought (fruits, vegetables, cereals and every blend under the sun). I’ve also tried baby led weaning and got as far as her enjoying sucking on a few things (loves sucking on asparagus!), but I was miserably failing at actually getting her to EAT anything substantial and we’d continue on with breastfeeding, pumped milk, and one bottle of formula before bed to bridge any gap in my supply and her demands.

This hunger strike has lasted every bit of 7-8 weeks and I’m not sure we’re out of it just yet. I have recently given the “squeeze pouch” delivery method a try and…she seems to enjoy them at certain times. She took one quite well for both breakfast and dinner yesterday, but this morning was a rejection. While they SAY a baby doesn’t wake out of hunger in the middle of the night past a certain age, I’m not convinced. The nights Shea has actually had some food, in addition to her bottle before bed, she has slept from about 7PM to 5AM and returned to sleep for another 1 1/2 to 2 hours after breastfeeding.

Every baby is different, but my introduction to foods has been very different from what I was expecting and what others were forecasting for us. My mom predicted that once foods were introduced, Shea would want to breastfeed less and less as her food consumption steadily increased. Makes sense to me, and while it’s what she experienced with my brother and I, Shea is as fond as ever of breastfeeding and bottles. My plan is to just continue offering her food and eventually, this will pass. I know. But per my best friend, Google, this is quite the prolonged hunger strike. I’ve tasted those purees and they’re delicious. Honeycrisp applesauce? Don’t mind if I do!

I promise to resume regular blogging (food) goodness later on this weekend…once I figure out what we’re eating for the week. Happy weekend!