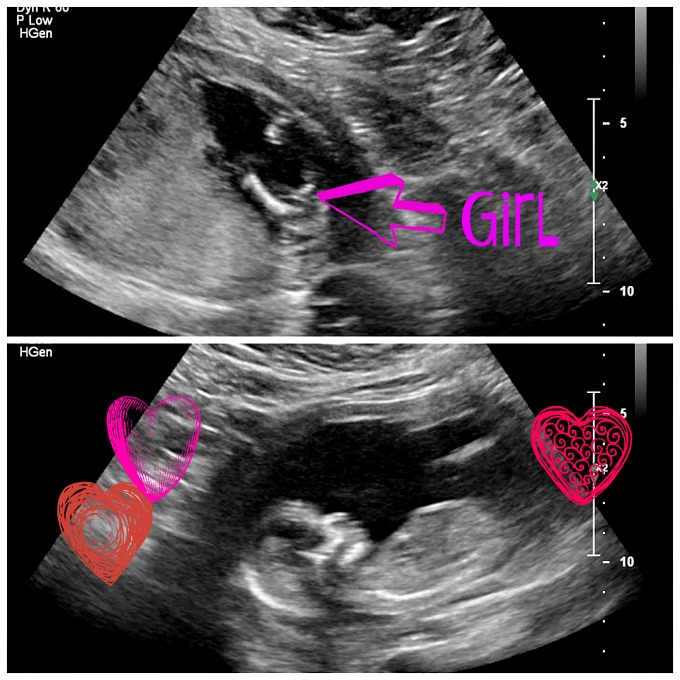 I’m getting the sense that society feels you’re supposed to want your second child to be the opposite gender of your first. You hear of couples trying for the opposite gender if they’ve been blessed with children of the same gender or very strong gender preferences, one way or another. It’s all very interesting to me since Mark and I were quite indifferent as to the gender of our children. This second baby, by the way, is another girl. 🙂

The sweetest ultrasound tech at my work quickly checked things out on Wednesday – enough to know that at 15w1d baby was measuring 15w4d and weighed in at 4 ounces (ish), the heart rate was a healthy 146 bpm, and baby’s gender was clearly identified. This was all wonderful news, but the most meaningful moment of that 5 minute ultrasound was the very first glimpse I got of the baby – she had grown so much, filling my uterus, as I had hoped and prayed s/he was. It was a huge, huge, huge relief.

Several people have commented on 2 girls and not “getting a boy” and it’s so curious to me – how could I ever be disappointed in having a second daughter?! Mark joked that 1 boy and 1 girl child is “the traditional American family” and we laughed, realizing that we both come from families of just that – he with a sister and myself with a brother. We just never had that preference, one way or another. I’m just so happy to have a growing baby and so far, a very smooth pregnancy. I’m even treating myself to a pre-natal massage in about 2 hours and 32 minutes. Not that I’m excited or anything… 😉

I celebrated finding out we’re having another girl with a little online retail therapy. I will had far less guilt knowing clothes will be passed down and with children 23 months apart, the size and seasons should correlate pretty darn well!

Have a wonderful weekend! Mwah!