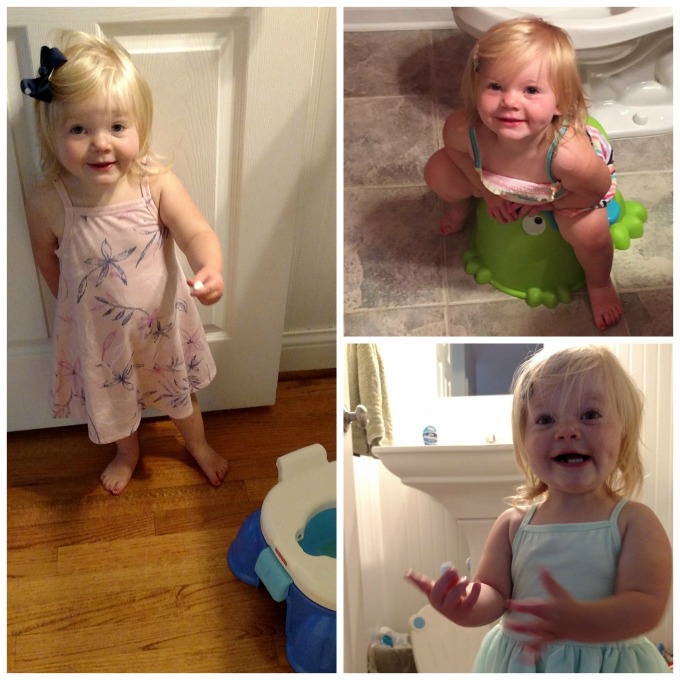 If you’re looking for me, I am probably in the bathroom with Shea.

About a week ago, the little potty that’s been sitting in the bathroom for several months piqued her interest. We were mid-diaper change when she squealed, “Potty!” and ran off towards the bathroom in her birthday suit. I followed after.

Before I could even make it to the bathroom, she’d done a little something in the potty and was happily clapping for herself. I chimed in with squeals, praise, high-fives, hugs, and a quick thought of, “Should I give her a reward and hope for some ongoing success!?!” I ran to the pantry and grabbed a mini marshmallow. She excitedly took the marshmallow from me and that little bitty marshmallow was savored bit by bit for the next 15 minutes or so as she beamed with pride.

When the marshmallow was gone and a diaper safely covered her lower half, she wanted to make several follow-up attempts. The little tupperware of mini marshmallows now housed in the bathroom (up high and out of her reach) were taunting her. There was one meltdown that ensued over a failed potty attempt and therefore no marshmallow reward, but she has since caught on. She has to produce a little something…in the potty…in order to get a marshmallow.

Shea was home much of this week with her aunt, grandpa, and grandma. They worked closely with Shea in looking for her cues that she may have to go – everything from crotch grabbing to a full-on announcement. It seems that most days we’re losing track of her successes on the potty and that’s exciting! There have even been (three, maybe four) successful #2’s on the potty. TMI? Sorry!

What spurred all of this? My hunch is daycare. She has been exposed to the potty at daycare and it has been visible to her at home for several months – we just never pushed the issue. At 21 months, we’re still not ready to push the issue and will continue to take her lead. I’ve communicated her self-lead success with daycare and hopefully we can remain consistent in working towards being fully potty trained.

Of course there’s all of these successes and then there’s last night – we hop out of the tub and are en route to her bedroom to get on a diaper and jammies…and she pees right on the carpet. #facepalm