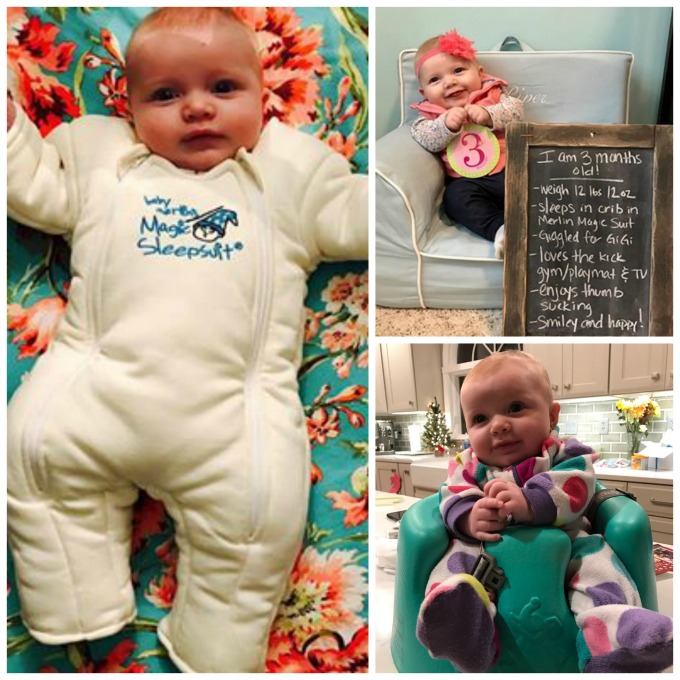 What is it about sleep and babies? New parents OBSESS about their little one’s sleep…perhaps because when you’re in the troughs of sleep deprivation, you wonder if you’ll ever see an uninterrupted 8 hours at any point again in your lifetime. I mean, there’s a reason sleep deprivation is a form of torture.

We made the same calculated mistake/decision with Piper as we did with Shea – we started her off sleeping in the Rock-and-Play (in her room). What a blessing and a curse, I tell you. For those that don’t know, a Rock-and-Play is a slightly inclined little hammock for a baby. It’s cozy and warm, it can vibrate, and the luxury models even rock themselves. By 3 months, Shea was sleeping 8-9 hours a night in her Rock-and-Play and Piper was doing great, too – she was typically waking 1-2 times a night to nurse by 2 ½ months (usually just once), but her first stretch of sleep was definitely 6-7 hours. This is big stuff in newborn-land.

I’ll note here that because I am unwise and don’t go to bed when the baby does…my sleep was never quite so plentiful. But that’s on me. Piper was definitely doing her part, especially since she is strictly business in the middle of the night. Unless a smell a prize, we don’t bother with diaper changes – it’s an efficient nursing session followed by a few manly burps and she’s back to bed.

At her 2 month check-up, I cringed when the pediatrician asked where Piper slept – I knew what was coming! When I reported the Rock-and-Play, I got a disapproving look and was told to get her into a crib ASAP. Most sources online do not support the Rock-and-Play for the use of extended and unsupervised sleep due to a risk of SIDS and a far, far, far greater risk of the baby having one heck of a time transitioning OUT of the Rock-and-Play and into a crib. That said, a LOT of parents opt to have their little one sleep in a Rock-and-Play in those initial months…and for the aforementioned reasons, I know why!

So, knowing I didn’t want to show up to her 4 month check-up only to receive the same side-eye about the Rock-and-Play, I purchased the Baby Merlin Magic Sleepsuit based on the recommendation from my coworker…who has twins! Reading the reviews on Amazon was fun, too…but mostly the pictures because, um, how cute? I die.

We’re just over a week in to our Merlin Magic sleeping arrangement and things are going REALLY well. Since Piper just turned 3 months old yesterday, this is all in time for the DREADFUL 4 month sleep regression. So, yep…I’m catching all the shut eye I can now (kinda sorta, anyway).

#1 – Piper goes down between 7 and 7:30pm. I put her in a short-sleeve onesie and then in her Merlin Suit and I nurse her in the nursery glider in a dark room with a sleep sheep noise machine going. This is our routine. Because Mark has been traveling a LOT, this has meant that I leave Shea downstairs to be entertained by Mickey Mouse Clubhouse and I can watch her from my phone on our Blink camera in our living room. If she joins me in the baby’s room, she holds my hand and we very softly sing Twinkle Twinkle Little Star or another favorite children’s song. Piper is very drowsy but not asleep when I lay her down and all but 1 night, she has gotten herself to sleep without me returning to her room to soothe her further. There have been a few disapproving grunts or random cries, but no true crying. She’s able to put herself to sleep within 10 minutes after about 20-25 minutes of nursing, burping, and cuddling/bouncing. I’ll also note here that her bedtime has moved up from as late as 11pm in the earlier days of life – so if baby is going to bed late, rest assured this will likely change. Additionally, Piper is at daycare 2 days/week and soon to be 4 days/week and her daytime rest is not as plentiful as it would be if she were at home all day.

#2 – Piper doesn’t go past 3am without nursing…and that’s okay. Piper’s weight gain is not quite where the pediatrician or I would like it (just shy of 5 ounces/week over the past month) and so getting that nourishment is good for her. That said, if I start to hear her stir any time past 1am (I swore I’d never be a light sleeper – wrong!), I tend to get up and nurse her. A big part of me does this because I know she needs the calories and the other part of me realizes that I’ll probably lay in bed waiting to hear her rustle around knowing that she’s likely to get up soon – might as well get up and “get it done”. Once her weight gain is on track, I will wait until I am 100% certain she’s up-up before interceding.

#3 – Piper’s second stretch of sleep is shorter than the first and the third is even shorter. This is standard for babies and very consistent with Piper. But that first stretch of sleep is ranging from 5 ½ to 7 ½ hours and I consider that a win, especially since it’s not all that shorter after transitioning to the crib.

On a somewhat unrelated note, Piper has a very well-developed morning nap. Both of my girls have been the same in this way. I can more-or-less set a timer – Piper will be ORNERY 1 hour after getting up in the morning and she’s ready for her morning nap…which, by the way, is her longest nap of the day. It will typically be 2 ½ to 3 ½ hours, sometimes even 4 hours (this is not-so-much the case at daycare because of various other factors outside of my control, but on days I work, she’s generally melting down as we’re trying to get out the door and she passes out in the car on the way to daycare).

Similarly, I try to encourage a nap or drowsy period around the time we’re eating dinner, 5pm-ish. If she passes out in the car seat on the way home, I’ll let her sleep in her car seat until 6pm. It’s generally an hour after she gets up from that last (short) nap that she’s ready for bed – she will start to yawn or get those red-rimmed puppy eyes and I find it critical to an easy transition to sleep to put her to bed BEFORE she’s over-tired. Getting an over-tired baby to sleep is horrible. Sleep begets sleep! When we were going through all of this with Shea, Mark would always tell me that scooting her bedtime earlier would result in earlier rise times and it was never the case – quite the opposite, in fact. Little ones need a LOT of sleep!

We haven’t done any sleep training with regard to sleeping through the night and until we’re satisfied with her weight gain, I’m unlikely to push the issue. That said, we are big proponents of sleep training and used a graduated cry-it-out method with Shea and will do so, if needed, with Piper. Well-rested mamas are better mamas and well-rested kids are MUCH more pleasant to be around 🙂

All this to say, every child and every family circumstance is different. Find what works for you and be consistent! And we all have to trust and believe that it WILL get better…we WILL sleep a full night again. Sometime.

So…what’s working for you, parents?!