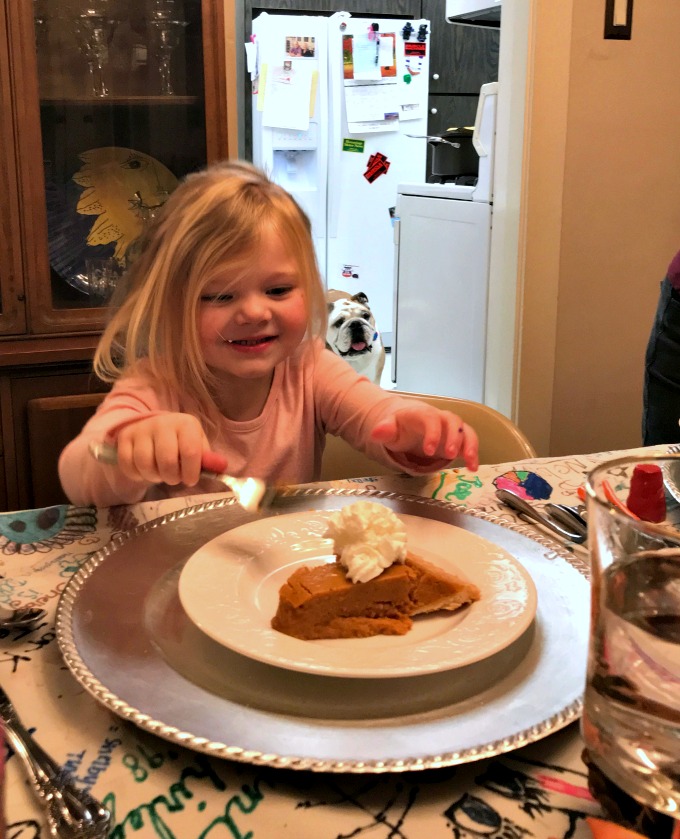 A Happy (belated) Thanksgiving to you and yours!

We are in the middle of our long weekend travels and are currently in Champaign-Urbana, home of the Fighting Illini, my alma mater, and my in-laws. We are here after a day in Chicago seeing my folks, brother, brother’s girlfriend, aunt, uncle, bestie, and bestie’s fiance for a lovely Thanksgiving feast. Or a mostly lovely feast.

The girls played hard with their Gigi who made a box into a day of memories…and the fun continued when my aunt brought them butterfly wings to prance around in. Dinner was memorable in that mom might’ve mistimed the turkey by an hour or 2, so we delayed, created a HANGRY 1-year-old, and my brother and his girlfriend had to boogie on to their next Thanksgiving celebration before everyone was done eating. But, it was all good and the food was fantastic. All except the stuffing, which was my dad’s contribution to the meal.

You’d never, ever, ever know the man has a dietitian for a daughter with his fast food coupon obsession. He’s also disturbingly obsessed with Big Boy and White Castle. So the stuffing on our Thanksgiving menu was from WHITE CASTLE. I mean, it looked good…but after learning its origination, stuffing was ruined for me. I actually just had the chance to Google it and you actually rip up the White Castle sliders and add a few spices and call it good. I mean…no. Just no. 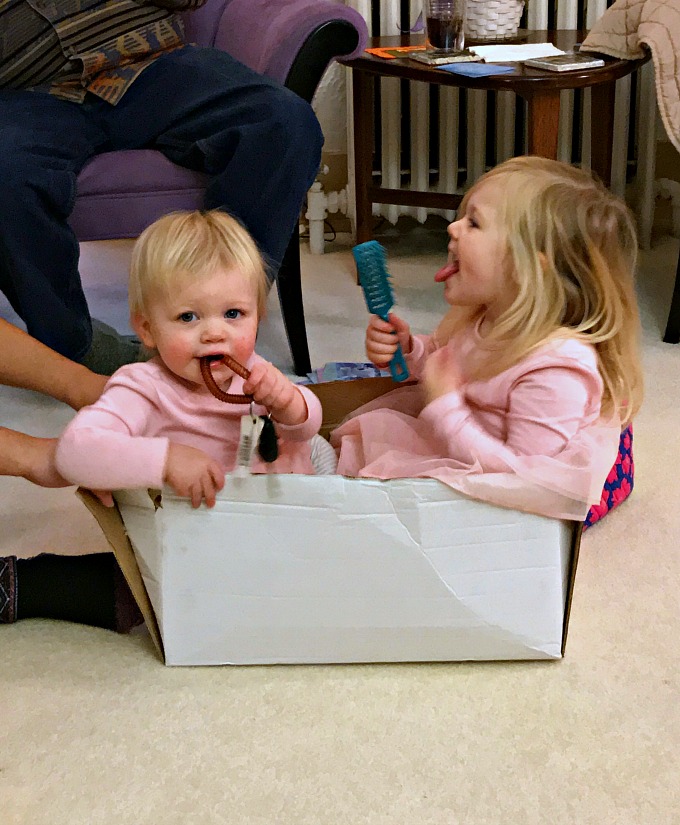 We left when the girls started to wind down for the night and we had an uneventful trip 2 1/2 hours south to Champaign. I mostly tried to plow through my (very long, but good – Lilac Girls) book club book. Because as usual, I’ve waited until the last minute to read the book. We got the baby monitors all set-up and settled the girls into bed before collapsing ourselves.

We got up Friday morning and headed to Bloomington, Illinois for our second Thanksgiving celebration with Mark’s side. At his aunt’s house, we joined his cousin and her family. The kids played and played – it’s the one time of year we’re all together so it is much anticipated. 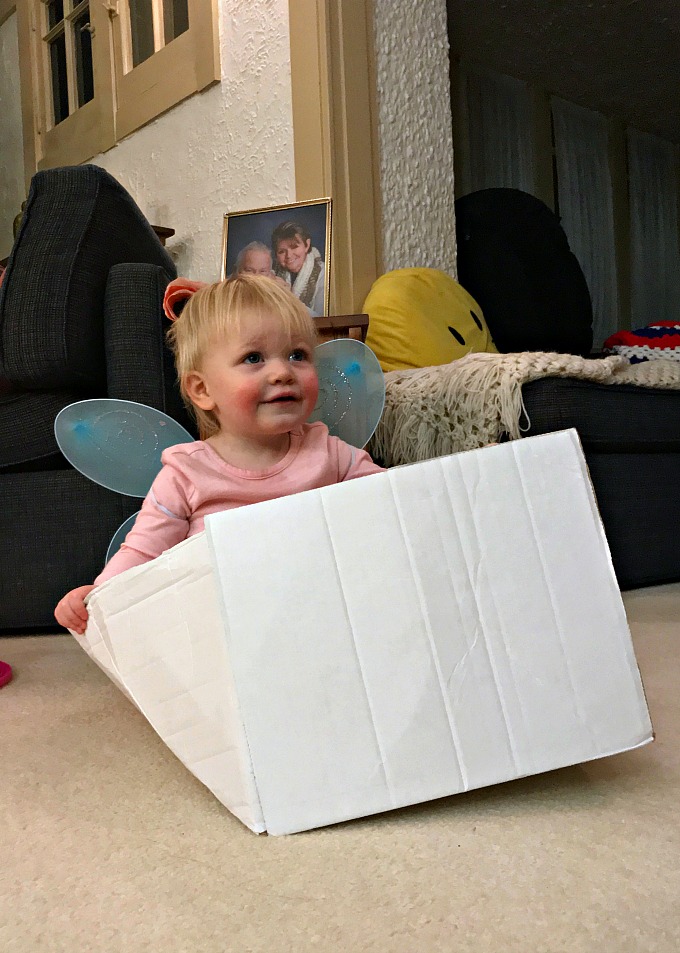 As tradition, we enjoyed homemade tortellini in delicious, rich broth sprinkled with hand-grated Asiago cheese. It’s so good and the effort is quite the opposite from WHITE CASTLE STUFFING. The tortellini are followed up with a traditional thanksgiving feast of turkey, stuffing, mashed potatoes, sweet potatoes, green beans, jello salad, salad, rolls, corn casserole, and gravy. I don’t think I forgot anything, but it’s possible. There is so much food!

We let our food settle for a bit before heading in for dessert. #stuffed

We headed back to Champaign and changed into our Illini gear. 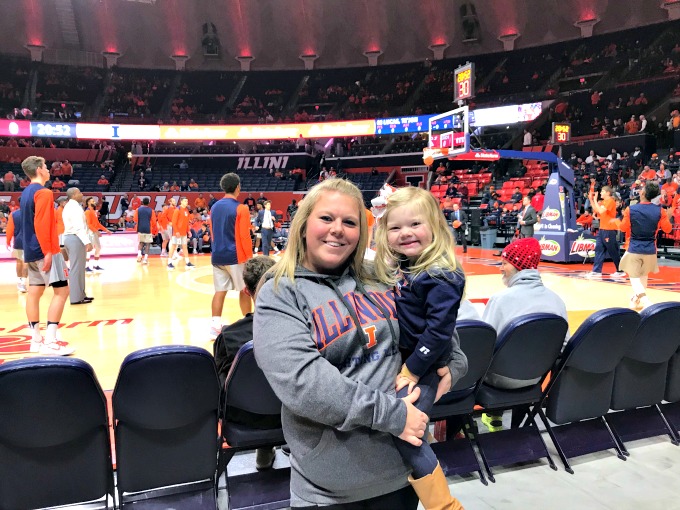 Without the students in town, State Farm Center was certainly not packed to capacity, but there was a respectable crowd there to root on the Illini basketball team who were taking on North Carolina Central. We were down 1 point at half, but pulled out the win.

After a failed attempt to take Shea to a basketball game last year, this year went much better. Shea enjoyed the game and our 1st row seats. She was more interested in everything going on around her than the game, but that’s probably to be expected. The game wasn’t over until 10pm EST and she hung on and was in a good mood! We sent grandpa home with Shea bug and we continued on to a local brewery for a drink.

So thankful for our health, our happiness, and our family and friends!

Thankful for you, too, dear readers. Now that turkey comas are hopefully over, tacos might sound good to you. Look at the top of this page, or in the side bar for a FREE e-book – 10 taco recipes ready in 30 minutes or less!!