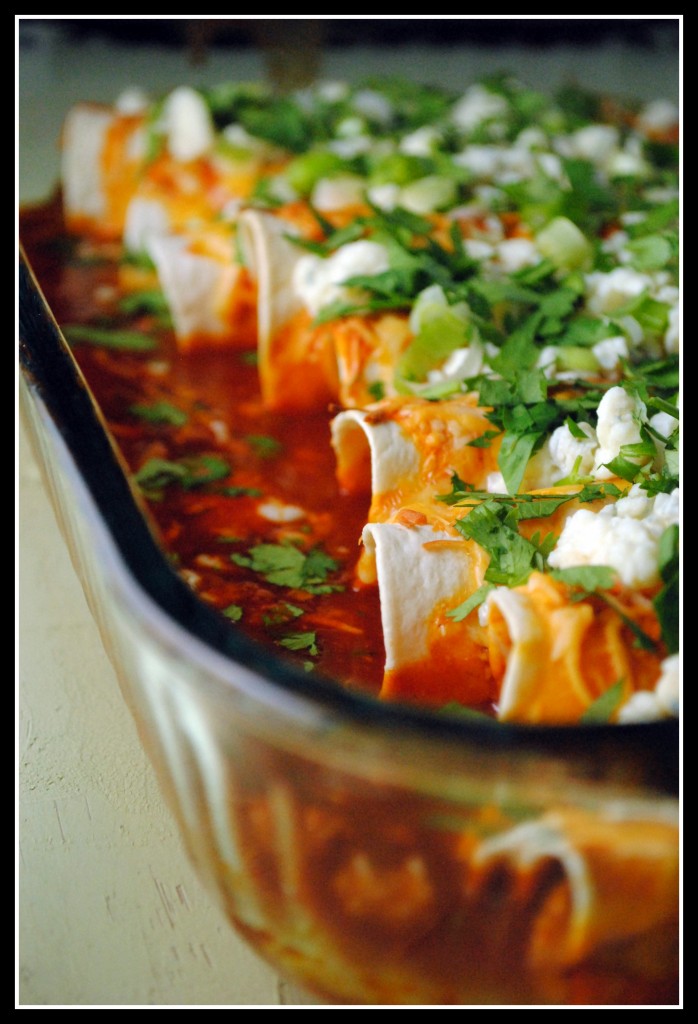 I’m sure it comes as no surprise that when I texted Mr. Prevention two options for dinner last Wednesday, he chose these Buffalo Chicken Enchiladas. In retrospect, it was probably a silly question. But I am 99% convinced that our mates aren’t as “picky” as we make them out to be. Giving them just a bit of (perceived?) decision making power when it comes to meal times can really make all the difference.

Mr. Prevention didn’t actually request this meal, but I did email him the recipe when I ran across it several weeks back.

::blank stare:: Hm. Not what I was expecting…coming from Buffalo Wing Man himself.

Then he followed up with, “Are you sure you haven’t made those already?”

He’s so well trained. I so very, very rarely repeat a recipe in my kitchen. There’s just far to many out there to be so limited. He, on the other hand, wouldn’t mind the same 3 recipes in rotation: thin crust pizza, deep-dish pizza, and one other menu item, I’d imagine.

So while his reaction to a new buffalo wing sauce recipe wasn’t what I was expecting, the outcome was. And he says he’s not predictable… 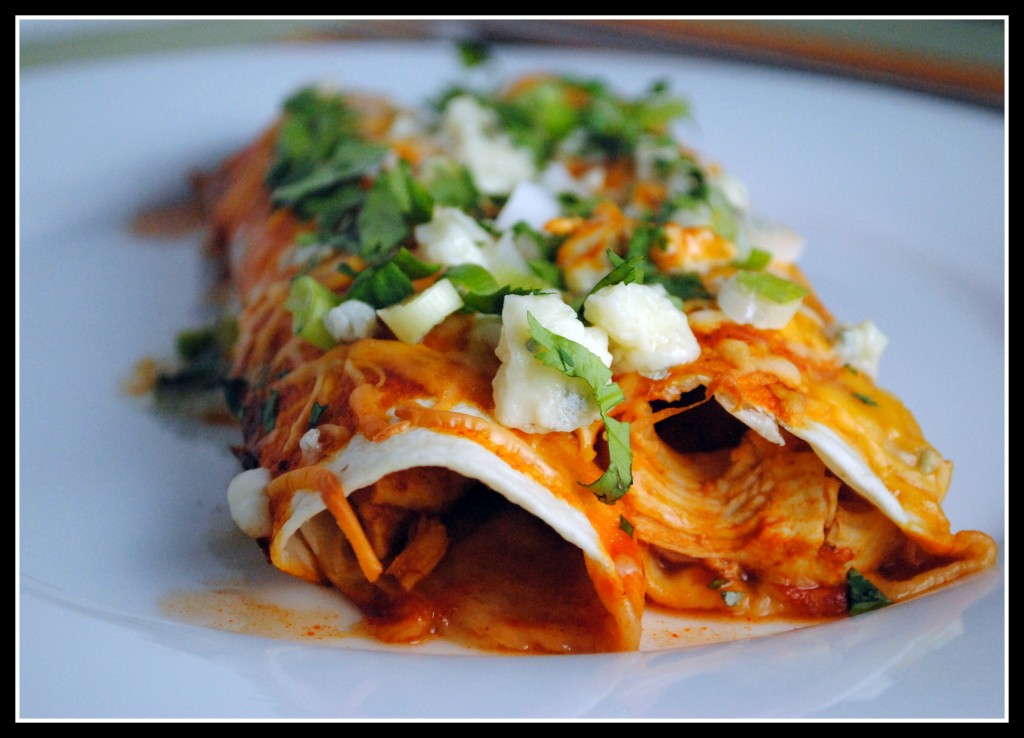 Spray a 9 x 13 baking dish with non-stick spray. Pour enchilada sauce in a bowl and begin by whisking in 1/2 cup buffalo wing sauce. Set aside.

Add shredded chicken to a bowl with 1/2 cup shredded cheese. Pour in about a 1/2 cup of enchilada/buffalo sauce mixture and mix thoroughly. Stir until mixture comes together.

Pour a drizzle of enchilada/buffalo sauce in the bottom of the baking dish. Take each tortilla and fill it with a few heaping tablespoons of the chicken mixture. Roll each up and set it in the baking dish, seam side down. Pour another 1/2 cup or more of enchilada/buffalo sauce on top of tortillas and add remaining shredded cheese. Bake for 20-25 minutes.

Immediately after taking enchiladas out of the oven, add crumbled gorgonzola on top. Garnish with the green onions and cilantro and serve. Yield: 9 enchiladas.

Result: These were good! I adjusted the ratio of enchilada sauce to wing sauce to be sure there was plenty of winginess. New word, let’s go with it. The combination of chicken, wing sauce, and gorgonzola in any form typically gets a BIG thumbs up. This recipe was no exception. While it wasn’t my favorite dish of last week, it certainly was my better half’s. And while enchiladas are typically a recipe I put into a “time consuming” category, these weren’t quite the time suck of other recipes, which is always a good thing 🙂 Enjoy!

Yesterday was a VERY productive day “off”. The lesson planning continues and while I am chipping away at all there is to do, I don’t know how my to-do list isn’t getitng any shorter in these days leading up to the start of the quarter. As soon as one thing gets crossed off, there’s something else making its way on. Ahh!

Question: When you think of the best teacher you’ve ever had, what made them your favorite?