Mr. Prevention got in last Thursday night from a work trip to India. I had scheduled the anatomy scan for the following day, Friday, May 23rd…which so happened to be our 5th wedding anniversary, and so that Mr. P could be there, too. Jet lagged but excited.

As I hopped up onto the table for the ultrasound, the tech, a coworker, asked if we had a gender reveal party or anything planned. As soon as I said we had both of our families coming over the following day to find out the gender, she got a little nervous. As it goes, the baby didn’t cooperate. Completely face down, the legs were oh so modestly crossed and better yet, the umbilical cord was running right between the legs. After an hour and half, she called it quits and asked if I could come back in a bit with the hopes of baby shifting some. Sadly, Mr. P couldn’t wait around.

I went back to the kitchen feeling a little sad…and yes, only a little. With all of our arms and legs, a 4 chamber heart, and all the important things, finding out the gender was much less a concern. As soon as I opened the door, my staff were all standing there — they had 2 balloons, one “it’s a girl!” and one “it’s a boy!” and wanted me to pick one. They got the baby a sock animal and they were all soooo excited…and disappointed when the gender was still unknown.

I had lunch, moved around some, and returned to ultrasound a few hours later. By that point, baby had completely flipped and unfolded its legs and voila……we’re having a baby GIRL! 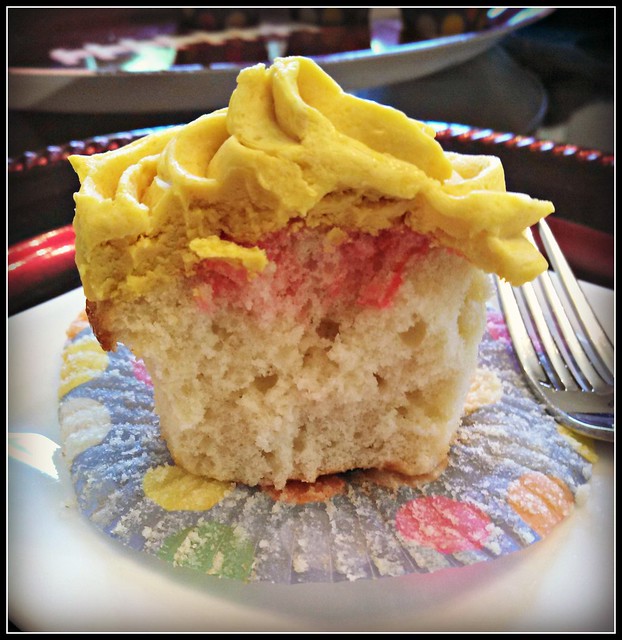 I came home and made one pathetic attempt at cupcakes with a little pink inside. The frosting had vanilla extract listed as an ingredient (yum!) but it made the white frosting into a off-white tan/putty color…so for whatever reason, I thought I should try adding yellow food coloring and ended up with something mustard-like in color. Hey, at least they tasted good! And of course, the family couldn’t have possibly waited for dessert for the big reveal, so we let them all make their guesses after checking out the ultrasound pictures. It was a special weekend not only for us, but for the grandparents-to-be, great aunt-to-be, and aunt and uncle-to-be. Baby girl is already spoiled with beautiful bibs, classic books, and a onesie from Mr. P’s favorite pizza joint.

I’m off to enjoy the weather and this book I can’t put down. But I wanted to share our big news and thank you all for being such warm support in this journey and sharing in our joy! It means so much 🙂