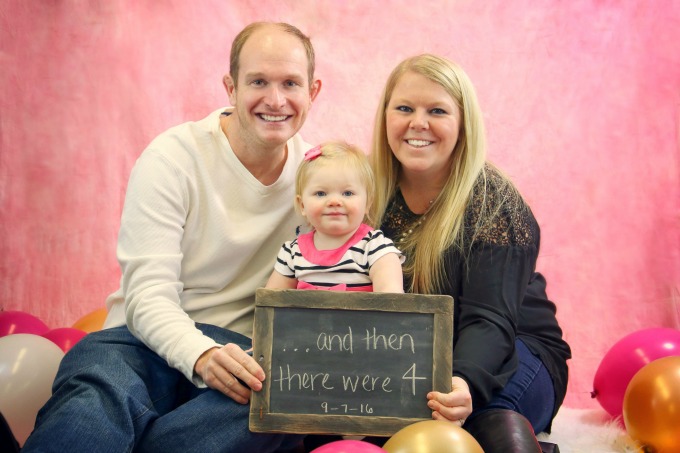 Our little family will be growing this September – Shea is going to be a big sister! Does the uptick in carb-a-licious meals posted on the blog make more sense now? 😉 Since this picture was taken, my due date was actually adjusted to September 6th and if that ends up being the case, my babies will be *exactly* 23 months apart. 🙂

Our “trying to conceive (TTC) journey” was very different with baby #2. After over a year of trying for Shea, followed by an IUI (I posted all about our infertility journey here), I was mentally and emotionally gearing up for a long haul in getting pregnant and praying all the while that we were, in fact, going to be blessed with a second child. I am a very open book as a person and many people knew we were ready for #2. I heard a lot of, “Oh, so-and-so…she had fertility treatments her first pregnancy and then, BOOM! She wasn’t even trying for the second!” I’m poking fun, but you hear these stories. All. The. Time. Baby #1 was a miracle among miracles against all odds and then without even trying, subsequent babies were conceived “effortlessly”. Sigh.

I didn’t want to hear it. As much as I wanted to think it, I knew I had to remain cautiously optimistic.

As with most women during breastfeeding, my cycle never returned. During this time, I struggled with my commitment and desire to breastfeed knowing that we were delaying efforts for baby #2. In this way, every woman and family is different. I loved breastfeeding and yet felt the pressure to regain my cycle and give serious efforts towards a second child. I vividly recall my 6 week post-partum check-up where my midwife shared that statistically, my best chances of conceiving naturally are in the next 18 months. Tick, tock, tick, tock.

I decided not to wean early and as it ends up, Shea very happily weaned herself right at 11 months. It was both a happy and sad time. I had the “goal” of a year and of course, I missed the closeness that came with breastfeeding. I spun the situation towards the positive and anxiously awaited my cycle (for the first time in my life). Eight long weeks later, we officially began trying to conceive (the end of October 2015, just after Shea turned 1).

Right off the bat, I used ovulation predictor kits (OPK’s). Just the cheapies. My ovulation was late and my cycles were long (40ish days). I would ovulate close to day 29, about 2 weeks later than most women. It was very frustrating. During this time, I continued on my 500 mg metformin daily (for PCOS) and tried to remain patient.

My midwife had agreed that we could try clomid after 2 natural cycles. Needless to say, that time came in December. I was prescribed 50 mg clomid to take on CD3-7. I tolerated the medication well and had no issues other than a slight headache for a day. I monitored for ovulation and did not receive any other monitoring. Often, clomid cycles are monitored by way of ultrasound to not only measure the maturity of the follicle(s) for optimal timing, but to also ensure the ovaries are not over-stimulated, resulting in an increased risk of multiples. Mark and I understood we were at an increased chance of multiples and continued with the unmonitored cycle, as monitored cycles would have required a referral to a fertility specialist…of which we do not have one locally.

Fast forward to the day after Christmas (3w4d) when I was SHOCKED to have received a positive pregnancy test. We were leaving my parents’ home for my in-laws that day and I not-so-patiently waited until we were in the car for the 2 1/2 hour drive to share the news with Mark. He didn’t honestly believe me at first!

I had my first ultrasound at 6 weeks and there was a heartbeat of 101 bpm! I don’t know why, but I wasn’t provided with an ultrasound picture…but here’s one from ~9 weeks when I got a bonus ultrasound from an ultrasound student. Perks of working in health care! 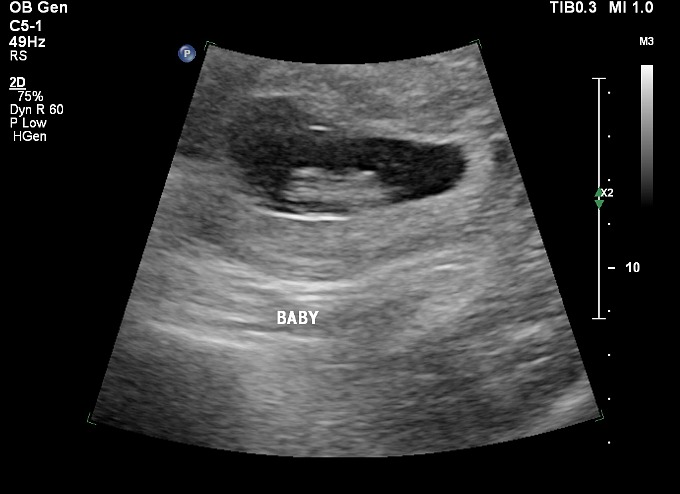 I don’t know what more to say than I feel so very blessed to have had such a different fertility journey with baby #2. We got pregnant with our first IUI and now, our first cycle of clomid – we are blessed!

We cannot wait to find out the gender so we can argue over names and in just 6 months, give or take, we’ll be a family of 4. Five with the dog 🙂

Thank you for all of your love, support, and kind words. xoxo! Please leave baby name suggestions, too! 🙂