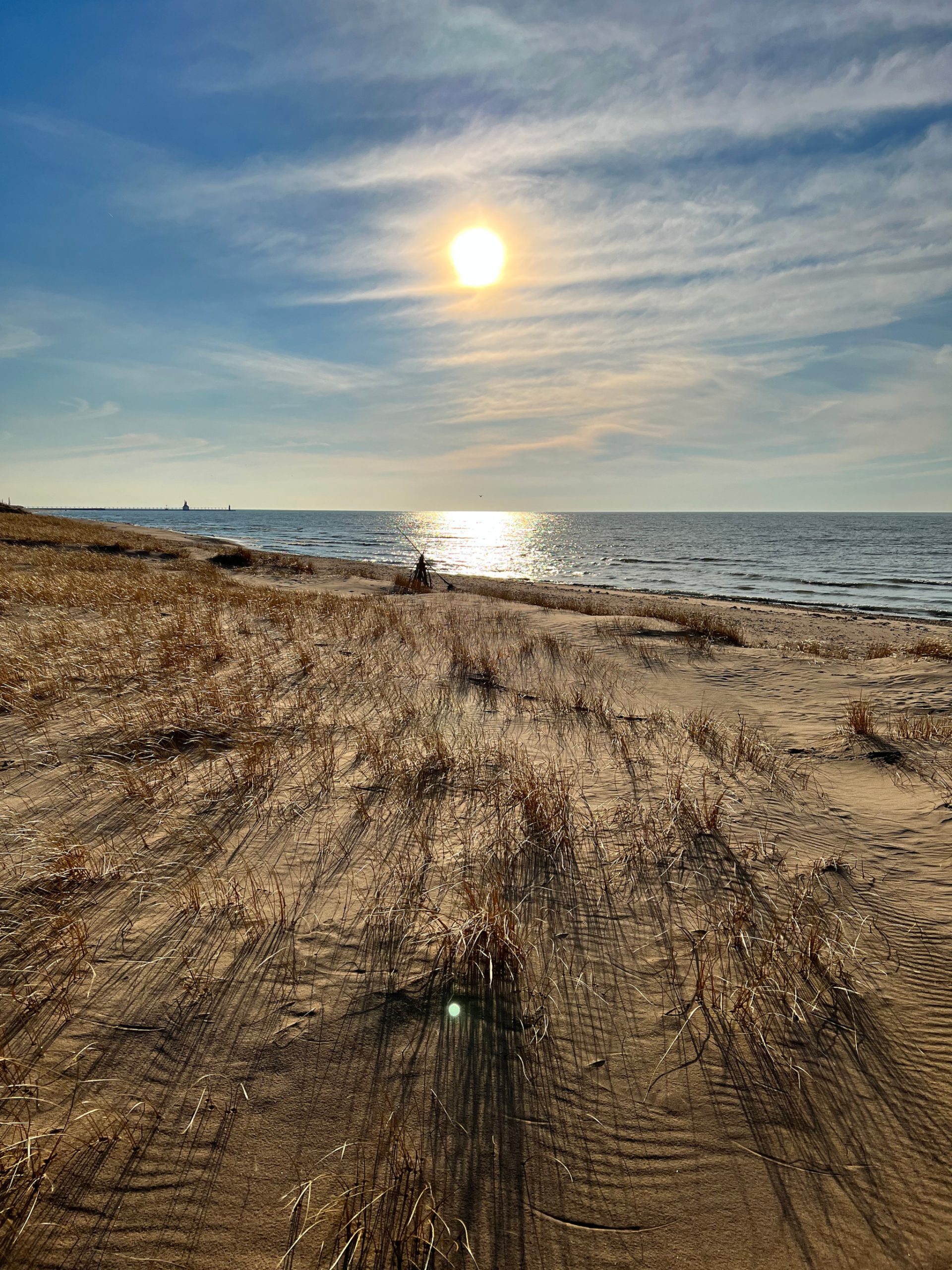 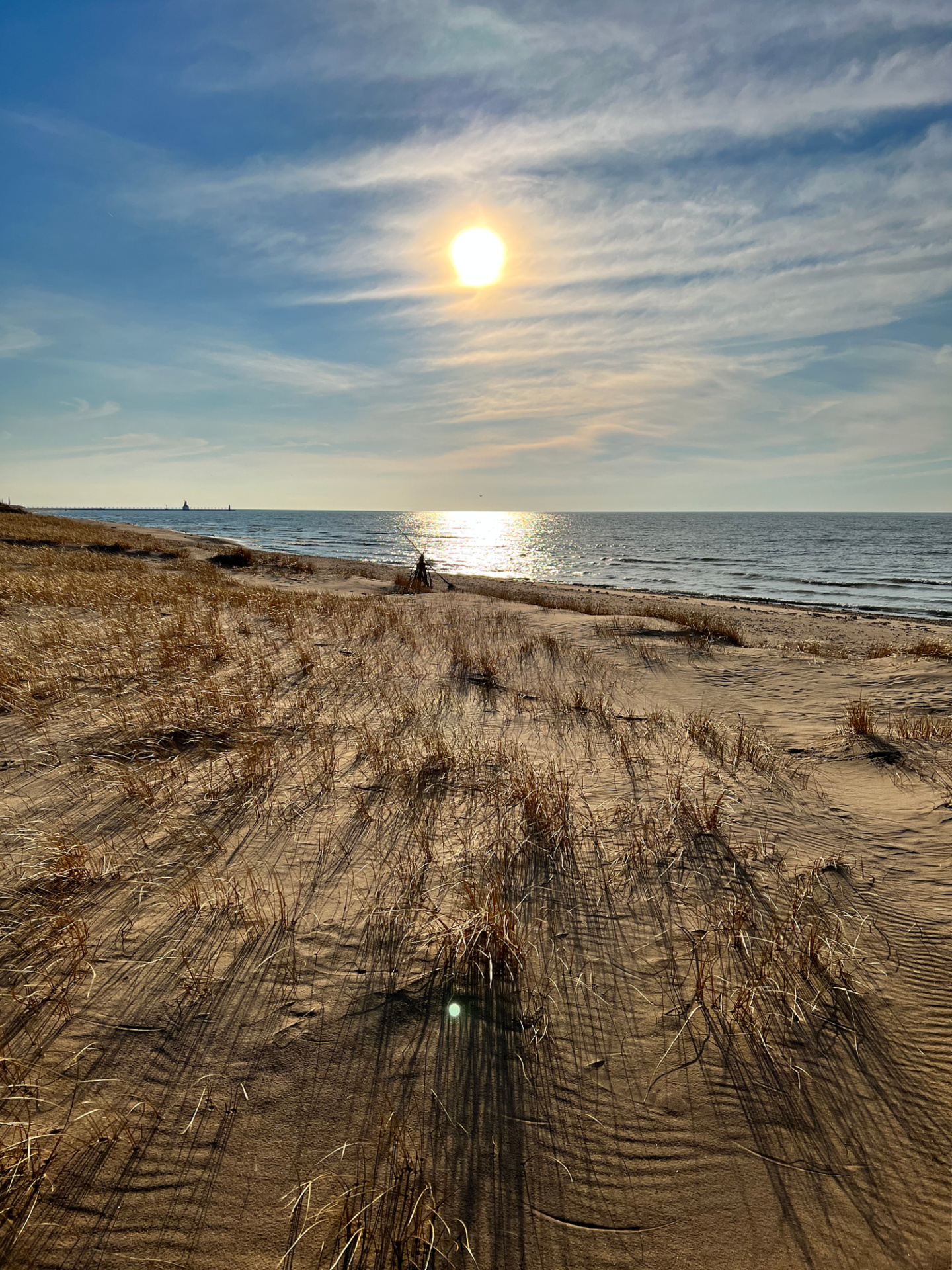 This week at work has been weirdly calm. Spring is usually our busy time at work (no idea why), so perhaps it’s the calm before the storm. But on Tuesday, I was DRAWN from the office to the beach — a detour the opposite direction of home to just…enjoy. I had worked out that morning (who am I!?) so there wasn’t the need to rush home and man, the sunshine was nothing short of therapy. I mean, look at those shadows. I am officially craving summer.

We may have a JAM-PACKED April, a wedding in May, and 3 weddings in the fall, but the summer looks like sunshine and good times ahead. 🙂 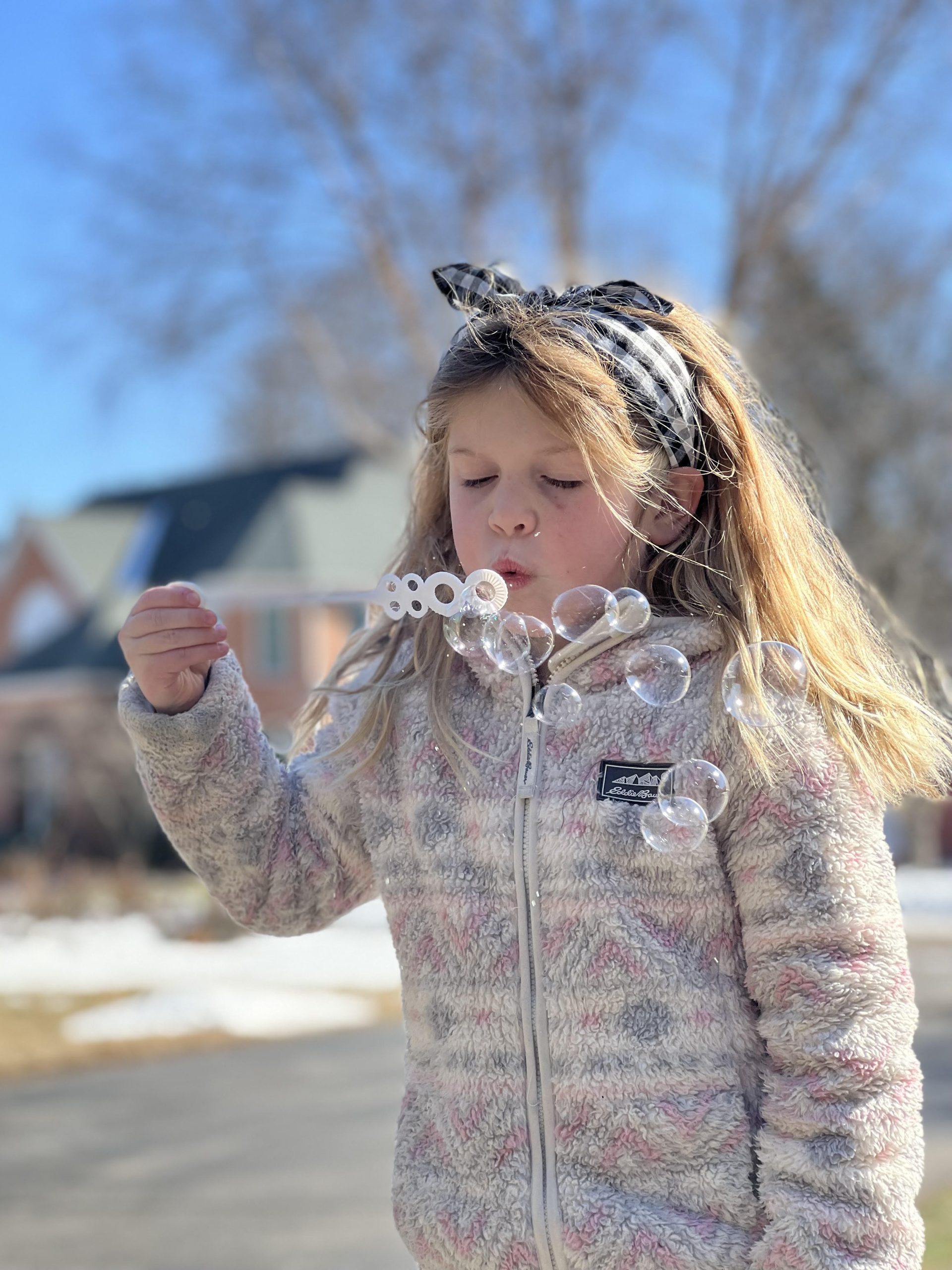 Last weekend, there was a day that was darn near 70 degrees, too. We went to the park and soaked it in. Of course, this week it snowed. Michigan…it gets very confusing this time of year to plan anything, including what to wear for the day. I’m just looking forward to not packing snow pants, mittens, boots, and hats every day…x2. I’ll save some serious time in the mornings.

Report cards came home this week and I’m super proud of both girls. Shea’s report card has actual benchmarking of mathematics and reading while Piper’s (pre-K) is simply social behavior and numbers/letters. My little Piper has really taken an interest in Lexia – a computer-based learning software/game that gives teachers updates on the student progress. She’s so invested in Lexia, that I believe her teacher was suspicious enough about her progression to email me a reminder that Lexia work should be independent and informed me that she will need to repeat the levels in kindergarten. I opted not to respond 🙂 Super proud of my little Piper Reese!

Shea officially has a mouth FULL of metal — a retainer on the bottom (removable), an expander on the top (mounted in), and braces. Eating and talking are new challenges but the girl is taking it all in stride. We’ll see how the first turn of her expander goes tomorrow being that it’s secured into the roof of her mouth and requires using a “key” to rotate towards the back of her throat. Blergh. Two adults, a flashlight, and some trust on her end will be required. I’m sure the first turn will be the hardest; keeping up with her orthodontics is quite the exercise in organization. It is all front and center on the fridge with dates and checkmarks because left to my own devices…yeah, it wouldn’t be good. 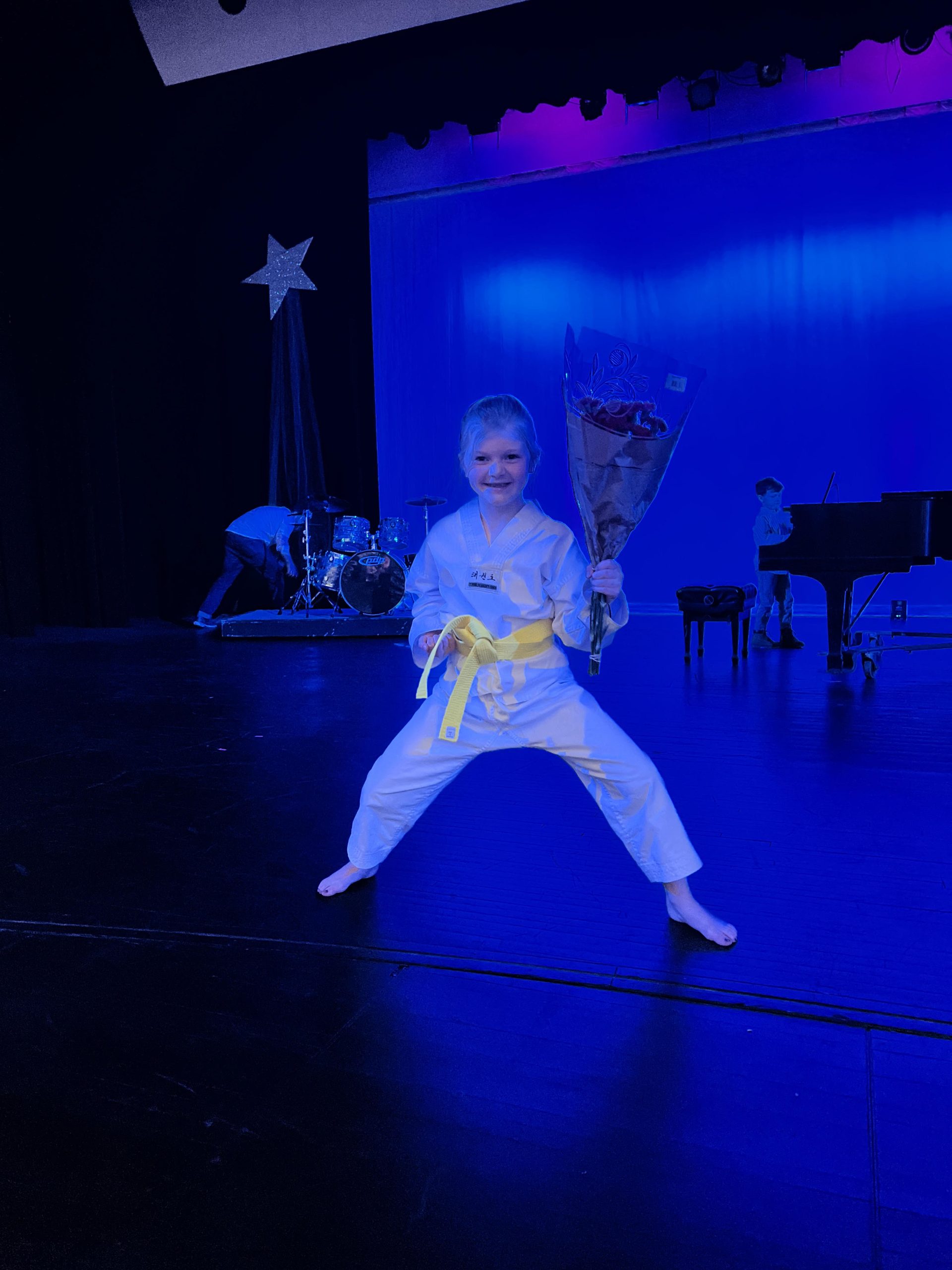 Shea also rocked the Variety Show doing a Taekwondo routine, complete with a board break. At least the evening show, the REAL show, was a success. The daytime show for the entire school was…less than ideal. The board never broke and so the perfectly timed music was done playing and Shea was on a silent stage trying, and trying, and trying to break the board with her hand. To no avail. Alas, the board hold was not proper and was being held with unlocked arms (my poor coaching!), so there was little-to-no chance of it breaking. The older kids started laughing and making jokes and after about 40 painfully long, cringe-worthy seconds, the audience began clapping, ending her suffering and embarrassment, and Shea ran off stage. I soon found her in a changing room bathroom sobbing and icing her hand.

I thought for sure we would be pulling her act from the show and she would be calling it quits. But my warrior 7 year-old was back out there that night as if nothing ever happened. I held the board, she broke it, and it was amazing. More importantly, her resilience amazes me and it was one of those moments as a parent I won’t soon forget. Proud is an understatement! 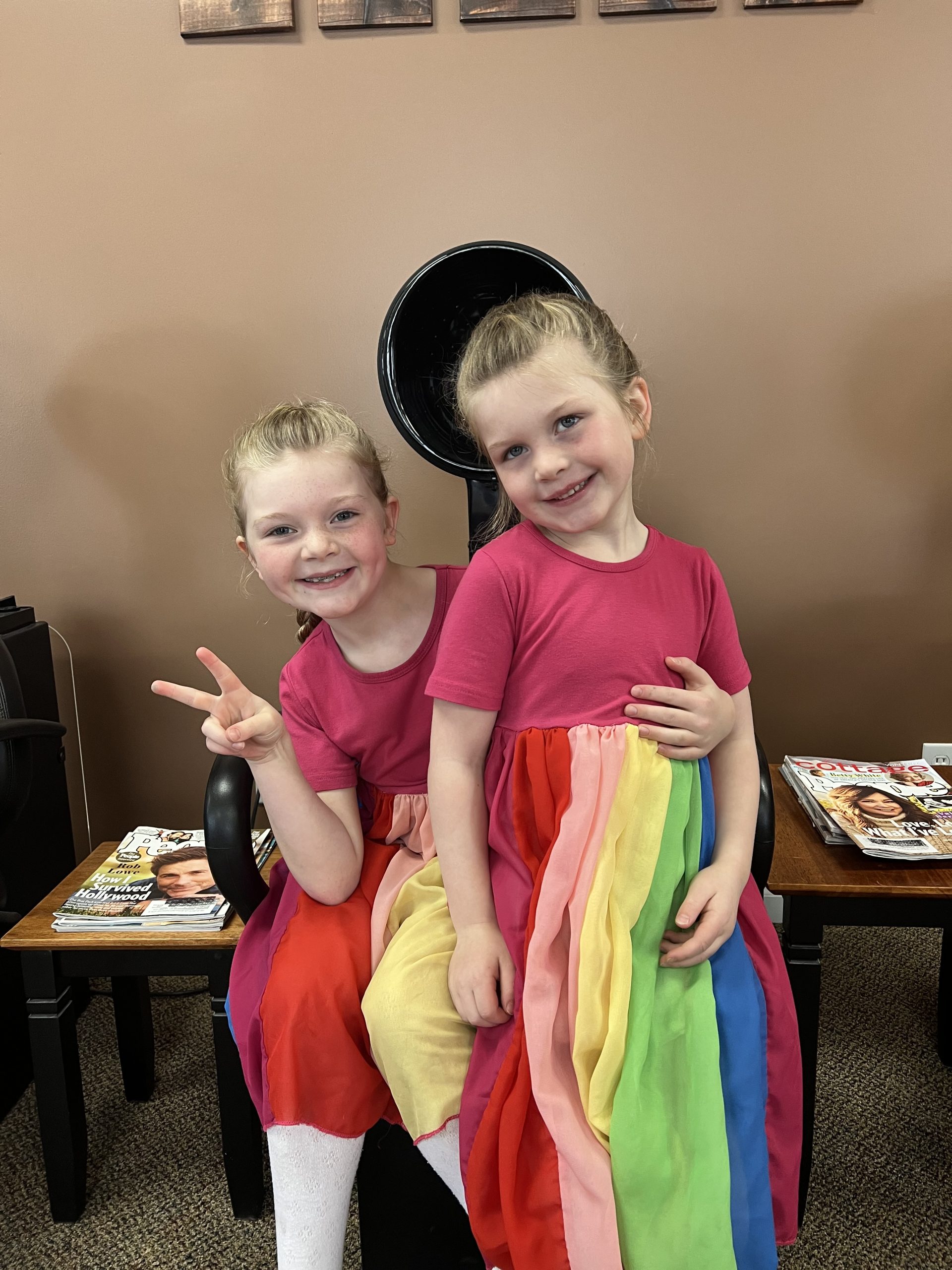 Between Variety Show performances (morning and evening), we took advantage of my vacation day and went for pedicures. They loved it, of course. We also got their hair done on Saturday – Piper NEEDED a trip and a thin out. Girl has SOOOOO much hair.

Tomorrow night, we’re having about 30 people over for a stout/St. Patrick’s Day party. Really, just a great excuse to get together and give our friends who ALWAYS host a break. We cleaned up the house BIG TIME last weekend and we’ve been trying to maintain the efforts throughout the week. We’ve succeeded…somewhat. I’m making corned beef sliders and not gunna lie, I’m pretty pumped about them! Of course I wish Illinois could’ve pulled out a win in the Big 10 Tournament against Indiana today, but hey, March Madness is upon us. Perhaps we’re just saving ourselves for the big dance 😉

We are SUPER not looking forward to the time change this weekend. Mark has the late game at hockey, so his 9:30pm start will be more like 10:30pm…or at least it’ll feel that way come Monday morning. Yuck. My team is sitting in 1st place, I’ve officially become a defensemen (as in, I never play offense any more because no one wants to play defense and I suck equally at both), and Mark is the 3rd leading scorer in the league (!!!). It’s funny how things happen sometimes. My calf strain is nearly back to good…just in time for my tennis coach to move away. I’m going to miss him – he has definitely kept me interested in tennis over the years. Hard to believe I’ve been playing for 7 years now and while I don’t suck as much as I used to, hockey is definitely a more natural fit for me. 😉 We’re going to see my coach’s band play one last gig tonight at a local brewery. I’m terrible with goodbyes and it was 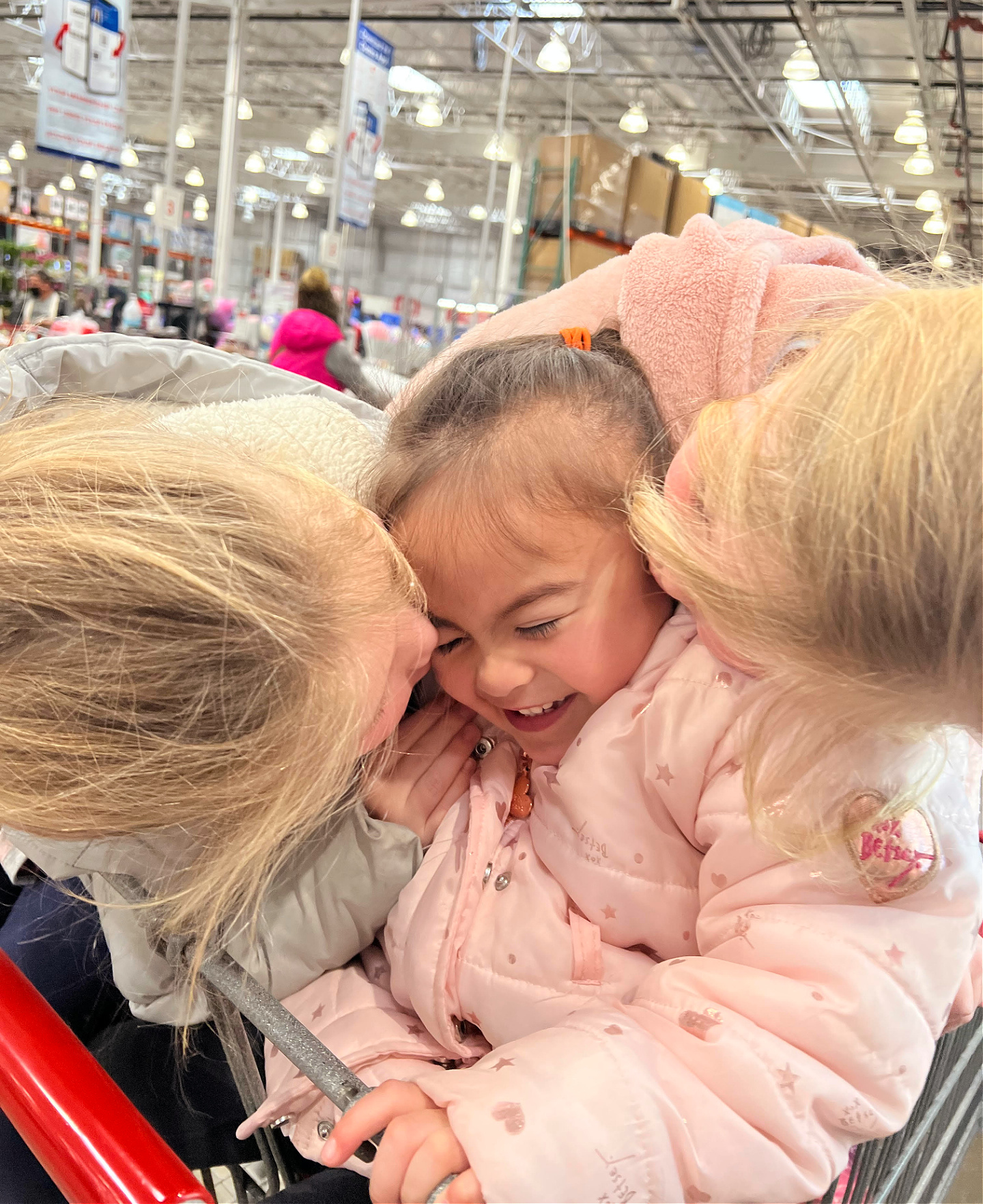 We took a quick trip to Chicago 2 weekends ago and the cousins had too much fun together. Our little girl tribe. I think they annoyed nearly every person in CostCo, but they had a lot of fun doing it and per usual, cute as ever. I’d really like to get on the books some type of a family vacation with my brother and his family. The girls really would entertain themselves. I need to make it happen!

We’re gearing up for our big trip to Bora Bora. Seriously, pinch me!!!! My big task before the trip is likely getting a new Kindle. Mine is officially on its last leg and the battery that used to last a month or more is now down to 2 days or less. I’m afraid of losing all 600+ books I have on there! Will I go back and read any? Unlikely. Have I read them all? Heck no. Will I ever? Who even knows. All I know is I don’t want to lose them so I’ll need to do some Googling to be sure I know what I’m doing in restoring what I’ve got on a new device. I’m on an unlucky run with technology after my laptop screen crack, so I just don’t want to mess anything up! I’ve been a reading machine this year — I believe I’m on book #8 or 9 for 2022. The other big task is deciding what alcohol to pack — I believe Mark said you can pack 2 bottles of whatever and we plan to do so because in the middle of the French Polynesian, everything is INSANELY EXPENSIVE. And when on vacation, I want to partake 😉

I’ve got a few ideas for a menu for next week, but if you’ve got any keepers you want to pass along – DO IT! Meal planning gets more challenging all the time, I swear.

There’s a Q&A coming up on the podcast – send me your questions or drop below in a comment. Would love to hear some readers on the show (and you can totally remain anonymous!).

Also seeking our next binge-worthy show. I’m amped for the release of Yellowstone and we’re all caught up on Ozark. Hit me with your recs!

Have a great weekend and going into March Madness…GO ILLINI!