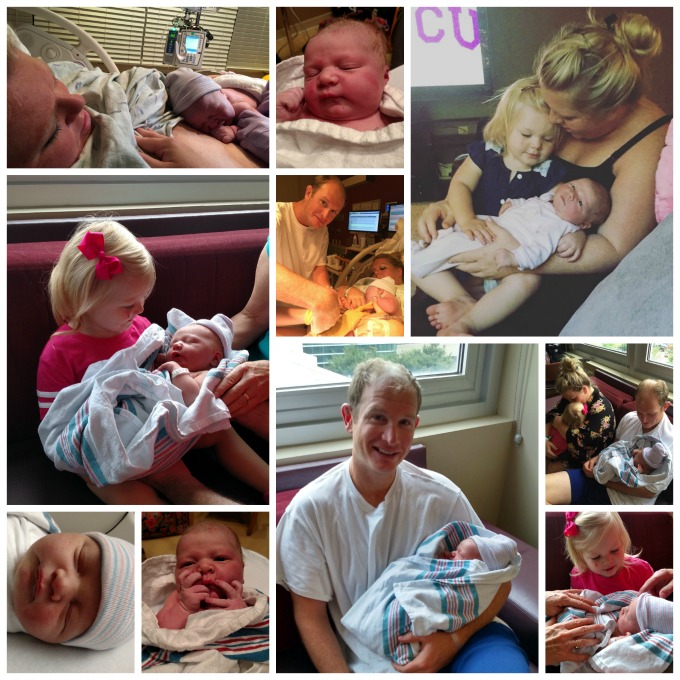 You often hear people claim second and subsequent births are far easier than the first. And you certainly hope that’s the case as a second time mom, but you don’t necessarily hedge your bets that you’ll be one of the lucky ones…especially after having the birth experience from you-know-where with your first. Like many other women, there was nothing other than creating a really cute baby that was the same between my conception, pregnancy, and delivery experiences when comparing Shea and Piper.

I’ve already talked about conceiving Piper (clomid) and Shea (IUI), as well as quite a few pregnancy updates with the both of them (I stick to my belief that my FitBit helped me have a better pregnancy with Piper – I think the rest was just luck of the draw)…but when it comes to their birth experience, all I can say I’ve had a really, really bad experience only to be confirmed by an amazing, emotional, and very fast second birthing experience. So, more on that. 🙂

I think I shared that for some silly reason, I never expected to see my due date. I had planned to wrap-up at work on Thursday, September 1st, work from home on Friday the 2nd, and go into labor at some point over the Labor Day weekend. Good plan, Nicole. Dummie. My in-laws were visiting from central Illinois that weekend and as it goes, since we were ready and it was convenient to go into labor, absolutely nothing happened. When my due date (9/6) rolled around on the Tuesday after Labor Day, I headed into the office for work. It really helped keep my mind off the impending arrival of Piper and to just keep busy, de-emphasizing it being “THE day”. I’m very grateful I continued working in order to gain that time at home after Piper’s birth, even with all the, “YOU’RE STILL PREGNANT? GO HOME!” comments.

By Wednesday, the day following my due date, I had come to peace with whatever happens happens. I worked, Shea went daycare, and we did our usual evening routine.

Thursday morning at 5:30am, I got up to go to the bathroom and behind me on the bed was a little wet spot. It wasn’t much but I thought, “Perhaps!” and quickly convinced myself it was probably nothing, scoot over an inch or two and get another few minutes of sleep (…I may just need it!). I was able to fall back asleep and come rise time, nothing more was going on. Things felt a little “slippery” south of the border, but it was nothing note-worthy. I continued with the morning routine, got Shea to daycare, got to work, and called my OB and left a message just mentioning the wetness on the bed.

I had a patient on my schedule at 10am and I called her to see if she could come in any earlier – just in case! Of course she couldn’t. My OB called back around 9:30am and asked me to go to labor and delivery to have the fluid tested. I tried to get a hold of the patient, unsuccessfully, and left work in somewhat of a rush and hoping the secretary would get a hold of the patient before she arrived (she did, thankfully) …and I apologized for being stubborn and not just rescheduling her in the first place. Oops.

I arrived in labor and delivery at 9:45am and was taken into a room and changed into a hospital gown. I thought for sure the test would come back negative since it wasn’t as though there was anything going on down there other than feeling a little slick (for lack of a better term, TMI – sorry!).

There was a bit of paperwork and the test was complete by 10:30am – it was my water! Not going anywhere – baby time! I updated Mark and our families – my in-laws decided to head to Michigan (about a 3 hour drive) in order to get Shea from daycare. It was VERY nice knowing she was at daycare and safe (though daycare did call around 12:30pm to tell me she had choked on her sandwich at lunch…but was okay. Geesh!) while the labor party got started and our reinforcements got into town.

My midwife came in and checked me – no progress from the 2-3cm and 70-80% effacement I had been for 3-4 weeks. Bummer. And, no contractions. I was given the option to just hangout and see if labor would start, try oral cytotec to ripen the cervix and perhaps start some contractions, and/or start pitocin. I opted for the cytotec which I received around 12:30pm.

Thankfully, I was told I could eat (I decided to only have 2 pieces of toast that morning and I was STARVING) and Mark arrived around 1pm with Qdoba 🙂 Shortly thereafter, I got an IV (3 attempts by 3 different RNs) and contractions started around 2:15pm – a very tolerable level of discomfort and interestingly, when they started they started 2-3 minutes apart, lasting 50-60 seconds. I walked the halls of labor and delivery and post-partum while Mark continued on conference calls (the man and his work, I swear!). By 3pm, the contractions were more intense but still tolerable and I continued to walk the halls.

My midwife came in to say she was going into a c-section and would be back to check me around 4:30pm and we could consider pitocin at that time if the contractions hadn’t picked up intensity much. By 5pm, I was in quite a bit of pain and was in the room for back rubs and support during the contractions. I requested an epidural at 4-5cm (I’m no hero!) and stayed on the birth ball for most of the next hour. Contractions continued every 2-3 minutes apart but were quickly getting more intense. By 5:45pm I was ready to send Mark on a man hunt for the anesthesiologist, but luckily, he arrived just a few contractions later and I got the epidural at 5:55pm. Between 6 and 7pm, I needed 2-3 rounds of ephedrine to bring up my blood pressure (this was an issue with Shea, as well, but I was given a lower dose of the epidural this time). Everything regulated well after that. I labored very comfortably in the bed and just talked with hubby.

My midwife checked me at 7:30pm and I was 6-7 cm and she broke the rest of my water or a second bag of water. Unlike with Shea, I didn’t feel the gush because of the epidural, but she said it was definitely there. My night nurse, Haley, arrived and she was awesome. I had kind of mentioned to the midwife (since I know her professionally) that my daytime nurse was somewhat of a dud (I believe I used that exact term and she laughed and said something like, “Well, I can’t disagree with you there.”). But, Haley was AMAZING. She put the catheter in around 8pm and had me switch sides to keep the epidural from working with gravity too much.

By 8:20pm I could feel some slight pressure (not pain) with some of the contractions, which continued every 2-3 minutes according to the monitors. I labored in bed with the peanut ball between my legs to keep everything open.

I decided to call my mom and touch base around 9:20pm and hung up with her around 9:35pm. Absolutely no pain during this time, it was glorious.

Haley came in around 9:45pm and checked me. She didn’t even say anything to us before using her Vocera (voice paging thing) to call the midwife and say that I was fully dilated and at a +3 station – READY TO GO. The baby nurses came, as well and the room was set-up and ready by 10pm. At this point, I was FREAKING out. Unlike with Shea and what I know of the birthing process, I was not feeling any sensation or need to push. I was 100% comfortable and didn’t know if I would be able to push effectively. These concerns brought to you by the fact that I pushed for 2 1/2 hours with Shea before even making good progress.

My midwife was amazing and encouraged me to try 1 contraction and if I didn’t feel ready to push, we would just wait until I did. It was just what I needed to hear. Mark picked up one leg and Haley picked up the other, and Mark said Piper’s head was already visible! I pushed once, her head was out. I started crying. I pushed twice more and she was on my chest – born at 10:06pm (ironically, Shea’s birthday is 10/6) on September 8th, two days following her due date. I was bawling with joy and relief and just completely overcome with emotion. They quickly cut off my belly band that was holding on the monitors and removed my gown so we could be skin-to-skin. Mark didn’t cut the cord for at least 10-15 minutes as it was pulsing pretty strongly from the cytotec.

The baby nurses toweled off Piper, but I held and nursed her through the whole process. Again, unlike my birth with Shea (no skin-to-skin as I was too exhausted and she had low blood sugar), I wasn’t expecting to get to keep her so long. Shortly after cutting the cord, my midwife asked if I could deliver the placenta. I gave one push and it literally came flying out at her (rather messy, oops) and she laughed at the whole thing. She said I was great at pushing and still yet, I felt nothing at all. No tears, no stitches – it was wonderful.

Piper remained on my chest for 1 1/2 hours and her temperature was a little high so they kept monitoring it and adding/removing blankets from over her while we snuggled. The hospital I delivered at does delayed baths for at least 12 hours after birth.

Over the next few hours I had my epidural removed, IV removed, went to the bathroom, and just loved every moment of the whole experience. Mark took pictures, our nurses took some photos, and we updated family by text and eventually calls. My sister-in-law in Seattle was trying to figure out the timeline and joked that she put her phone down for just a few minutes and bam, there was Piper!

We were moved over to post-partum around 2am and thanks to a few rounds of vitals needed on the hour, there wasn’t much sleep going on. Our time on post-partum is somewhat of a blur with all of the tests and paperwork and cat naps. But the morning after the birth, big sister Shea stopped by and was very serious with her new sister. She LOVES holding the baby and is working on being gentle. She’s a bit confused and jealous with breastfeeding and has tried to help herself to a breast a few times. It makes me emotional to know she’s not my only baby any more and to see her struggle some with the adjustment, but I do know they will be best friends in no time.

My parents were able to come up the following morning, yesterday, the day we were discharged. It was great to have my parents there, but we missed my brother and sister-in-law. Not having family close is hard.

Currently, she has her days and nights confused (sigh..) and absolutely loves to cluster feed. My milk came in today so that’s a huge relief (my milk took 7+ days with Shea and she lost a lot of weight in that first week). I’m almost reassured to hear that second time moms tend to make more milk than with their first, so we’re definitely focusing on on-demand feeding and a good latch. So far, so good!

Thank you for all of your kind words on Instagram (where you can find MORE pictures!). Love to you all!